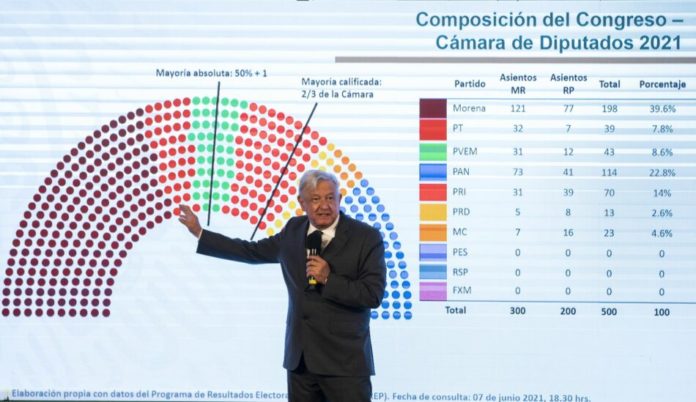 Morena achieved the majority by obtaining, according to the Preliminary Electoral Results Program, between 34.9 and 35.5% of the votes for federal deputies according to INE’s quick count. However, they are set to lose between 50 and 63 seats compared to the previous election, in which it had 253 of the 500 seats in the Chamber of Deputies.

Although the PAN has managed to make progress achieving a support of between 18.5 and 19.3% — between 106 and 117 seats — and the PRI between 17.8 and 18.5% — between 63 and 75 seats — the apparent success of the right wing is actually relative. In 2018 the turnout was 63.1% of the electorate, with an abstention of 36.9%, while in the current election the turnout was barely 52.5% and an abstention of 47.5%. This data is relevant as it disproves to a great extent the advance of the right wing, since in reality this is not so much due to a surge in support as to the abstention of a layer that in 2018 supported Morena.

This was a bitter victory for Morena, as it had every chance of winning. However, opportunism, unprincipled alliance and the unwillingness to implement more far-reaching measures such as the progressive tax reform, have all taken their toll. These are the fundamental reasons for the contradictory victory of Morena at the national level, which acquires specific features in each state but which basically reflect the same situation: the growing dissatisfaction with Morena’s leadership, the disappointment due to the delay in the promised reforms and an increasingly clear integration of shameless opportunists of dubious origin and even more dubious principles.

Morena’s triumph has been the result of the grassroots militants and sympathizers who have not hesitated to launch a new campaign against all odds. Even in spite of, and not infrequently against, the leadership of the right wing headed by Mario Delgado. Months ago, hundreds of militants fought a relentless battle against the impositions of the right wing from which, in spite of being defeated, they rose up to continue the electoral battle of June 6. Therefore, in no way can the defeat, however partial it may be, be attributed to the rank and file militants, who have shown enormous loyalty to their party.

On the contrary, as we pointed out in the article “Morena: the Enemy at Home”:

“The real enemy in the next elections will not be in Va Por México nor in those who oppose the transformation of the country. The real enemy in the next elections, and in the next period, will be within Morena, which has not only experienced paralysis as a result of Yeidkol Polevnsky’s policies but also an accelerated decomposition since Mario Delgado became president of the party. Delgado has promoted a revolving door policy, accepting an endless number of PRI and PAN candidates who not long ago opposed Morena. At the same time, he has sidelined the rank and file in internal processes.”

“With the supposed idea of reaching an absolute majority that can adopt the necessary reforms for the transformation of the country, but in the background negotiating with different groups at the local level to win without much difficulty, Delgado has pushed aside the most radical elements of Morena, those that have built the party for several years doing grassroots work, touring the neighborhoods and barrios. These members were not taken into account when deciding the candidacies. At the same time, he has prioritized alliances with groups and bosses inside and outside Morena, such as David Monreal in Zacatecas or Xavier Nava in San Luis Potosí. In this regard, it should be noted that Citlalli Hernández, general secretary of Morena, has been a key player in exposing this situation by pointing out that many of the candidacies announced by Delgado were not the result of agreements in the National Executive Committee of Morena; as she also did by pointing out the false alliance with the Green Party announced by Delgado, which had not been an agreement of the party leadership.”

The setback comes as a result of Mario Delgado’s right wing politics: the open door policy for candidacies which has diluted the militancy and in many places blurred the difference between the candidates of Morena and those of the old regime represented by the PRI and the PAN. In fact, in various locations there was no real difference between Morena’s candidates and the right wing outside the party. All this has come at a cost. For now seemingly minor but, if not corrected, one that will grow to be a real burden for Morena and the 4T. The policy of the leadership is no coincidence; its orientation does not respond to the interest of fighting for the demands of workers, women and the most oppressed. On the contrary, their politics are the result of their underlying interests: to demobilize and demoralize the Morena rank and file, to tie them down in order to prevent them from advancing a different policy within the party and to use it as an instrument for their daily struggles.

Unfortunately the democratic organs within the party have long since disappeared. It is therefore difficult to regain control of Morena in order to rebuild and develop it as a tool for the struggle of the oppressed. Even though we should not surrender it (and in particular not give up on winning the ear of the best comrades of Morena) we should be aware that due to policies of the right wing — who hold the party’s apparatus in its grip — it is very difficult to recover Morena for the oppressed of Mexico.

For an anti-capitalist left!

The economic and health crisis in Mexico, as elsewhere in the world, has accentuated the gap between rich and poor. And it will continue to do so as the crisis develops, and the bourgeoisie tries to squeeze every last drop of sweat out of the workers through its representatives in Congress. At the same time, the crisis Morena is going through as a result of the policies of its leadership will deepen this crisis. The impositions of Delgado, as well as the defeat in Mexico City, historic bastion of the Mexican left, will deepen the discontent against the right wing and its opportunism, intensifying the crisis Morena now faces.

Therefore, an indispensable task for the most conscious youth and workers is to build an alternative outside of Morena. This does not mean abandoning the work in Morena, much less the dialogue with its militants and sympathizers. On the contrary, it means being aware of the concrete limitations that exist to recover Morena for the workers, peasants, youth and the oppressed in general. That is why it is urgent to build this alternative outside Morena in order to encourage a much broader debate, inside and outside the party.

Strengthening political discussion, organization and struggle in the schools, workplaces, neighborhoods and suburbs is a crucial task. Likewise, openly raising the need to struggle, not only against the right wing of the PAN and the PRI but also against capitalism itself is essential for those who are concerned about the advance of the right, which although it may seem insignificant for now, will grow with the sharpening contradictions of capitalism.

It is our task to explain that the misery and hunger suffered by the vast majority has its root in capitalism. To do so we must educate ourselves in the ideas of Marxism, as well as study the recent experiences of the class struggle in the world and the history of the workers’ and socialist movement to draw lessons for today. Most especially, it is necessary to build an organization with a clear socialist programme, which is capable of linking the concrete demands of the struggle of the workers and oppressed with the struggle for socialism.