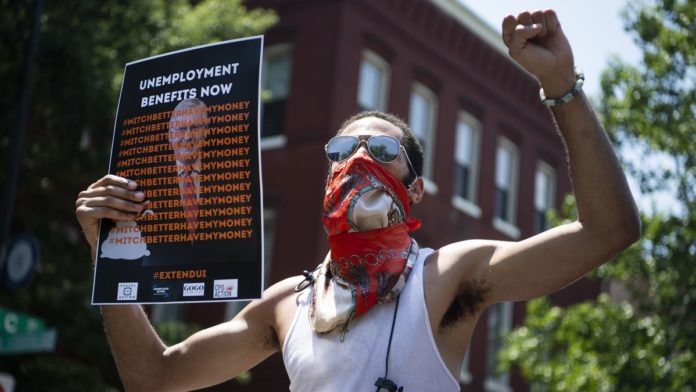 Amanda has worked in food service for two decades, getting her first restaurant job when she was 15. She is now a single mom in California where all federal unemployment benefits will end in September.

“I don’t know what I am going to do. I haven’t got a call back from my boss. My Pandemic Unemployment Assistance (PUA) is barely nothing. Without the federal top up it’s $134 a week. And even that ends in September.”

Twenty-one states, including Texas, are jumping the gun. They plan to end federal unemployment benefits by July, affecting some 3.4 million workers. The anxiety of unemployed workers and families this summer will be off the charts.

The bosses are peddling the myth that pandemic unemployment is the easy life and they need to scare workers back to their low-paid jobs, even if there are no decent jobs out there.

Campaign Against the Unemployed

Kevin Brady, top Republican on the House Ways and Means committee, argues that the unemployment top-up is “sabotaging our jobs recovery.” His friend, Neil Bradley, Vice President of the U.S. Chamber of Commerce, says unemployment benefits are a “barrier to filling open positions.” Jobs, they claim, will go overseas if American labor won’t take them. Capital is free to leave, while labor has to accept being imprisoned in low-waged work.

The Republicans are campaigning to “save America.” Their strained chorus argues against taxing the rich and regulating the rich, ignoring the country’s massive inequality. They want an end to what they see as “generous” unemployment benefits.

President Biden continues to play both sides, reminding bosses not to be too harsh on the unemployed and in the same breath, chastising workers that if you are “offered a suitable job, (you) must take the job or lose the benefits.”

Unemployed food service worker, Amanda, is well aware of the existing rules around qualifying for benefits, “if your boss offers you your job back you either take it or lose your job. They already know that!” But that’s not enough for the employers. They want to create an army of hungry workers willing to take any job and put up with any conditions.

Return to the Old Normal

The bosses want to get back to their old normal. The dirt has barely settled on the graves of the half million working people that died during the pandemic. Gone is the bosses’ faux respect for essential workers, along with their hazard pay. The bosses bit their tongues, from their villas, while workers on the front lines were falling sick and dying. But now they are getting loud again.

The employers, together with their two political parties, the Democrats and Republicans, have spent decades lowering worker expectations around pay. They have dashed young people’s hopes. Women, people of color, and young workers have been corralled into jobs where they have no weekend, where they are lucky to hit 40 hours, have no health benefits, or pension, or vacation, where they are often expected to be available to work at the drop of a hat. For what? For minimum wage or a dollar or two above it. For not enough to rent a one-bedroom apartment.

And the bosses know exactly why there are not long lines to get back to the gig jobs, the cleaning jobs, the food service jobs: those jobs pay less than what is needed to live a reasonable life. The U.S. bosses’ MO is pretty simple: young workers pick up the tab on everything. They are paid barely enough to live, and if they get sick or want an education they should expect a mountain of debt to shadow the rest of their life. And the poorer they are, the higher the interest rate for them. It is a life of terror, where you work a shitty job because the alternative is losing everything.

Many unemployed workers are also not convinced that the pandemic is over. They saw how essential workers were worked to death and were unappreciated. Their safety was not prioritized. The politicization of mask enforcement in public transport has led to a huge spike in attacks on flight attendants, with one punched out by an angry passenger. Additionally the rise of phenomena like “maskual harassment” in the restaurant industry where sexual harassment was intensified with customers demanding to see female servers’ faces for tips. And the bosses wonder why workers don’t trust them? And into this world inherited by the young, is the latest whip on their backs: no more unemployment benefits. You are done.

The bosses have christened themselves Job Creators, yet only 1.5 million jobs have been created this year. Some 17 million workers remain unemployed. They want to get back to work, to do something useful for their communities and to get a real paycheck in their hands. Workers want that feeling of confidence back that long term unemployment undermines.

Both the American Jobs Plan and American Families Plan are popular, but remain stuck on the desks of politicians in the Beltway. The American ruling class reluctantly want to increase government spending but are split over how much. The two billionaire political parties who run Congress are divided over how each bill will affect their electability in the next election.

According to a May Data for Progress poll, 58% of voters were in favor of more stimulus money for jobs, childcare, elder care and infrastructure. Taxing the rich is popular, with 63% of voters and 52% of Republicans supporting corporations paying for new infrastructure programs. Transforming that desire for change into action would mean a movement on the scale of last years’ BLM protests. Millions of unemployed and employed support these changes but see no mechanism to fight for change.

There are millions of jobs that need to be created today. Every home should have solar panels. Mass transit needs a revamp towards carbon-free transportation that is free to ride to get people out of their polluting cars. The union leaders should be mobilizing for a workers’ Green New Deal and jobs now!

Workers also need affordable, publicly-owned housing. And with an era where new virus variants are inevitable we need a free, nationalized health care system with a neighborhood clinic infrastructure. Our schools need to dramatically reduce the teacher-student ratio and our parents need free, high quality child care to return to work.

As Amanda navigates the uncertainty of unemployment pay ending, she is certain of some things.

“I was raised by a single mom who worked seven days a week. Seeing her struggle and my own struggles has made me a socialist. We put our time, sweat and blood into this world and what do we get in return?”