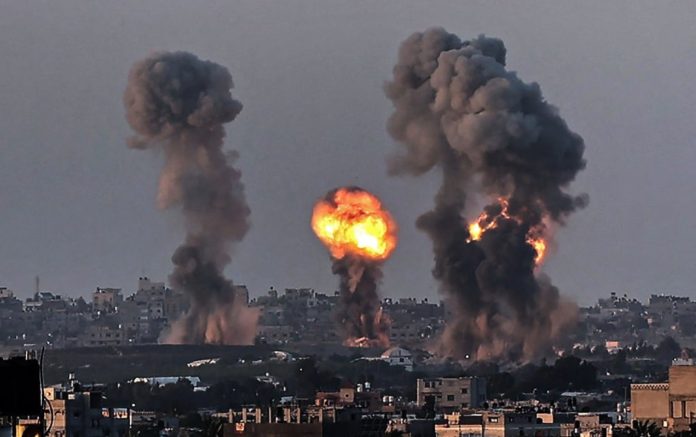 For more details, see this statement from Socialist Struggle Movement (ISA in Israel-Palestine)

The eyes of the world are turned again to explosive events in Israel and the occupied Palestinian territories.

After nearly a month of major provocations by Israeli police and far-right thugs against Palestinian families in East Jerusalem, during the holy month of Ramadan, the ground is burning again and the skies are filled with the orange color of air-strikes and rockets.

Under increased repression, some protests among Palestinian Arabs within Israel have escalated into riots. Jewish far-right street gangs are also rioting and have attacked Palestinians with Israeli citizenship in horrific lynch attempts in several cities. However in many cities Palestinian Arabs and Israeli Jews have protested together to end the right-wing provocation and stop the war. Members of Socialist Struggle Movement (ISA in Israel-Palestine), with which Socialist Alternative is in political solidarity, have participated in many of these protests. A curfew is announced tonight in Lydda and police forces have arrested hundreds of protestors.

It is the Israeli regime’s repression of the popular protests by young Palestinians which opened the road for Hamas and other reactionary right-wing and anti-worker organizations in Gaza to further escalate the situation. Netanyahu and his far-right government have not only increased their repression of Palestinians within Israel and in the occupied and besieged territories, but have put millions of Israeli citizens in danger.

Rather than showing any signs of de-escalation, the Israeli regime has announced that they’re only looking to make things worse. At this moment the top leadership is considering a ground entry into Gaza, as part of “Operation Guardian of the Walls.”

It should be emphasized that this is the latest outburst of mass anger after the Israeli regime has systematically supported far-right nationalists in taking over Palestinian homes in East Jerusalem neighborhoods, particularly Sheikh Jarrah; did nothing to vaccinate the population in the occupied territories; prevented East Jerusalem Palestinians from voting in the now-postponed Palestinian elections; set up barricades to disperse Palestinian youth gathering at the Damascus Gate as they traditionally do during Ramadan; supported the annual racist far-right “Flags March”; sent a massive police force to brutalize worshipers at the Al-Aqsa compound; and then cracked down on popular peaceful demonstrations across the country in reaction to these actions.

Biden’s Reaction Put to the Test

For decades, U.S. governments have consistently backed the Israeli state despite some administrations being critical of the tactics of particularly brutal Israeli governments which undermine any possibility of a political settlement. In the last several years they have raised the annual military “foreign aid” to Israel to over $3 billion. But the growing divisions within the Democratic Party on this issue have expressed themselves with Alexandria Ocasio-Cortez standing in solidarity with the Palestinian people, correctly drawing the connection between popular resistance in East Jerusalem with the events in Colombia and with Black Lives Matter in the U.S., questioning the role that the U.S. ruling class has played in promoting repression and violence around the world.

Andrew Yang, who is now running for mayor of New York City, on the other hand, has made a statement in support of the Israeli regime cynically pointing to the important financial connection that exists between the Israeli state and NYC.

Looking more broadly, the U.S. has lost some of its grip on the Middle East since the 2011 revolutions in Egypt and other countries, opening the door for the Chinese regime to significantly increase their influence in the region. In many parts of the Middle East China is now the leading lender and investor in infrastructure and technology, as well as trade partner. Ultimately, it’s important for the U.S. ruling class to keep the loyalty of several key reactionary regimes against growing Chinese influence. It is clear that the interests of profits from oil and technology as well as its overall global power and prestige are vastly more important to the U.S. ruling class than the safety of either the Israeli or Palestinian masses.

Meanwhile, more Americans and, significantly, more Jewish-Americans, especially young people, are increasingly opposed to the Israeli right-wing regime. Even for the older Jewish-Americans who once supported what they believed to be a state under threat of existence, it becomes more difficult to stand by an increasingly reactionary regime. It is crucial that U.S. workers and unions link their struggle against the same U.S. corporations and their loyal politicians which oppresses us and at the same time supports the oppression of Palestinians.

Biden’s plan to have a somewhat “hands-off” approach is now impossible and he’s being forced to show where his administration stands as his own party, historically united in its support for Israeli militarism, is increasingly divided on this question. The empty call for “de-escalation” only hides the reality of competing U.S., Chinese, and European imperialist interests in the region and we should have no illusions that any solution based on the interests of these regimes can provide peace and safety to people in Israel-Palestine.

Any solution to the ongoing war and misery has to be based on rejection of all elites in the region and their exploitative capitalist system.

Instead, all trade unions in Israel-Palestine must firstly defend their members against racist discrimination, arrests, and loss of jobs due to police infringement of freedom of movement. Furthermore, they should oppose the siege and the colonialist take-over by settlers in East Jerusalem and the Occupied Territories as profoundly anti-worker actions and policies. Palestinian neighborhood committees should organize meetings to discuss how to democratically organize the resistance and build their own independent working class organizations to fight against this oppression. These working class organizations and parties, also crucially needed within Israel, are the only real alternative to the reactionary anti-worker leaderships in Israel, Gaza, the West Bank, and the whole region and only they can reach a solution based on workers’ interests and solidarity, respecting the national aspirations of both peoples, and fight for full equality and freedom, rather than the brutal reality under capitalism.

End all military aid to the the Israeli regime and all other reactionary regimes in the region; For a struggle for the freedom of religion and movement and against police brutality; For a struggle for housing and jobs for Israelis and Palestinians without discrimination; For a struggle for the right of self-determination, for real peace, and for two capitals in Jerusalem; Not a fake peace between repressive capitalist elites that covers up for national oppression, exploitation, and poverty, but peace which is based on equality and a socialist alternative in the whole region to guarantee the rights and welfare for millions of Palestinians and Israelis.