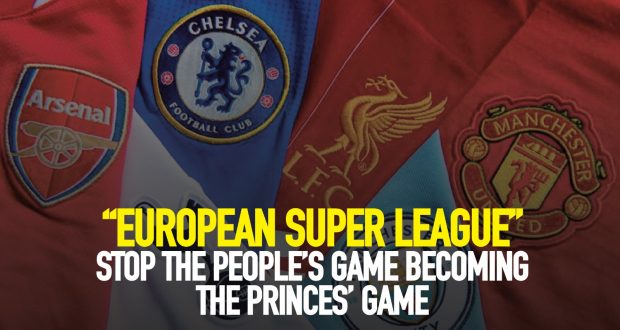 The news that 12 top European football clubs are on course to establish a new “European Super League” has been met with rage by football fans across Europe. The so-called “Big Six” in the English Premier League (Liverpool, Manchester City, Manchester United, Arsenal, Chelsea and Tottenham Hotspurs) are to join three giants from the Spanish La Liga (Barcelona, Real Madrid and Atlético Madrid) and three from the Italian Serie A (Juventus, AC Milan and Inter Mian). While French giant Paris Saint-Germain has so far declined to join, talks are believed to be ongoing. Bayern Munich and other clubs in the German Bundesliga have stated their opposition at this stage.

This atrocious initiative is the antithesis of football and even capitalism’s own hallowed principle of “competition”. While details are sketchy, there does not seem to be any relegation proposed from this super league, at least for the founding clubs! It is designed to crowd out the rest of the competitions and teams. It is a fait accompli to the rest of the European footballing community — ‘we are the kings, we write the laws, and control the big money’.

The failure of Modern Football

The people’s game is now the princes’ game — a plaything of Saudi princes, shady oligarchs, and megalomaniac vulture capitalists. Sheer naked greed is the motivation here, as it is with everything under capitalism. “All that is holy is profaned”, wrote Karl Marx of capitalism’s insatiable desire to commodify everything and squeeze ever-greater profit from everything for a dwindling number of super-rich elite.

But this latest greed-gorged initiative is not new. It has been going on for decades. For many, the creation of the English Premier League in 1992 was the tipping point. In reality, the slow dismantling of the beautiful game began earlier than that, with the removal of the terraces, the ever-increasing price tags attached to star footballers, the explosion in merchandising, the corporate boxes in stadiums, the spiraling price of tickets — all this has moved football further and further away from the fans.

The proposal itself is an admission of the failure of “Modern Football”. Massive investment from a new plutocrat owner is a Faustian pact. Behind the picture of a smiling Sheik or American billionaire holding the club jersey, there’s a warning: make me profit, or else! If a big club doesn’t win a domestic league, or misses out on Champions League football — with its lucrative windfalls — financial collapse hunts them down.

Undoubtedly, the Covid Pandemic has brought that specter to the fore with virtually all of the big clubs massively over-leveraged and dangerously low on cash (though still more secure than the smaller clubs without the big TV deals). But it also exposes another fundamental lie of capitalism — that the free market creates free competition, which drives innovation and creativity. Actually, the opposite is true — it leads to monopolies. This is the Amazon or Apple of sport. It might look nice and shiny, but it actually destroys more than it creates. Modern Football is no different.

But opposition to this unrelenting creep of “anti-football” has exploded with this announcement. A poll of Spurs fans found that 97% were opposed to the new super league. Sky Sports pundit Gary Neville’s lambasting of the announcement has been viewed nearly 5 million times on Twitter — a brave stand given he chose to use Rupert Murdoch’s (who must be licking his lips at this proposal) Sky platform to utter his criticism. The Facebook pages of clubs have been swamped with angry fans threatening to cease following their childhood team if they decide to proceed. One fan commented on Twitter, “Until people understand that we can’t have nice things under #capitalism, this will keep happening. We’ll keep losing things we care and are passionate about for someone else’s profit.”

Some commentators, like Gary Lineker, have claimed that this is simply a ploy by the big teams to extract better terms from UEFA for television rights and sponsorship deals. That remains to be seen, but the fundamental point here is: our game is being bartered over by vulture capitalists, big businesses and banks. Like the game itself, we are reduced to mere spectators, expected to pay inflated prices to line the pockets of the elite.

European football’s governing authority, UEFA, has condemned the move. But UEFA are like Dr. Frankenstein here — they created this monster which has now turned on them. The corruption and greed that is part of the DNA of UEFA — horse-trading behind the scenes to gift lucrative sponsorship deals or hosting rights, made a development like this inevitable. UEFA is not the friend of the football fan any more than they are the defender of the beautiful game.

Even if the current proposal is shelved or some compromise is worked out, our game is still in mortal danger. It needs to be wrestled from the grubby hands of the capitalists. Fan-owned clubs, where the decisions of the club are made by those who support the club, is the only way football can be saved. That might seem like a pipe dream now, but the alternative is to watch our teams and our game be destroyed by people who will stop at nothing to make a profit.