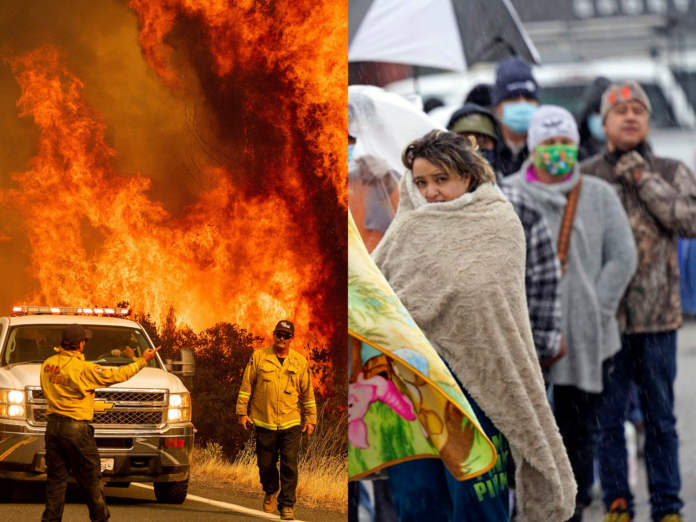 While we may be coming out of a devastating economic and health crisis, unfortunately an even bigger crisis looms. The International Panel on Climate Change (IPCC) estimates (at best) three to four degrees of global warming by the end of the century. Just a few years ago the “end times” estimate was 1.5 degrees.

At the rate currently projected by the IPCC of three to four degrees of warming, by the end of the century huge sections of habitable earth could become rendered uninhabitable by direct heat, desertification, and flooding.

With every increase of even half a degree, we’re looking at immense growth of human misery and natural disaster. At seven degrees of warming, at the equator a human standing outdoors would be cooked to death from the inside out within a few hours.

This is the context in which new U.S. President Joe Biden is proposing his “sweeping” infrastructure plan. While it is true that his $2 trillion proposal represents the biggest ever federal spending package to tackle climate change, that is only because of the totally pathetic legacy of inaction around the climate.

Biden’s “The American Jobs Plan” is presented as the first of a two-part proposal to revitalize the American economy. Part two is “The American Families Plan” whose details will be released in the coming weeks.

Despite platitudes about doing right by the American people and the planet, Biden has actually been quite upfront about the real motivations behind his proposals. It is first and foremost an attempt to undercut the ascendency of China as an economic powerhouse on a global scale. Transportation Secretary Pete Buttigieg was asked by the Wall Street Journal about the plan’s potential focus on high speed rail and his immediate response was: “Why should Texas be inferior to China?” This infrastructure plan is primarily an attempt to reassert the dominance of the U.S. on the global economic stage. As Biden himself said, “The rest of the world is closing in and closing in fast. We can’t allow this to continue.”

This does not mean that the plan is without direct benefits to working people. If passed as is (which is unlikely considering Biden’s recent track record of making concessions to right-wing Democrats), it will create jobs and deliver improvements in both clean water and internet access. It will also fund desperately needed repairs to public schools suffering under years of neglect. The plan does also include important measures to address climate change such as the development of infrastructure for electric vehicles, retrofitting homes for energy efficiency, and investing in high speed rail.

However, a closer look at the details reveals the clear inadequacies of Biden’s proposal. The bill amounts to $2 trillion spent over 10 years. This is starkly inadequate when compared to Biden’s stimulus bill, which spent nearly the same amount this year alone. The inadequacy is made even starker considering that global economic damages from climate change are projected to reach $1.7 trillion per year by 2025 and as much as $30 trillion per year by 2075.

So why is the price tag so small, and the timeline so long, when compared to the scale and immediacy of the crisis? According to the notoriously anti-progressive think tank Third Way, the plan is appropriately sized because it will spur investment from the private sector. This “incentivization” strategy is totally laughable when you consider that’s the exact approach that has left us with eroded infrastructure for decades.

There is also a lot of ambiguity in the proposal about who the money goes to. While Biden’s stimulus bill marked a real shift by sending direct aid to working people, this plan is quite different. $300 billion is earmarked to “support domestic manufacturers,” $80 billion will go to for-profit corporation Amtrak, and somewhere in the territory of $170 billion will go toward electric car infrastructure, with most of that money going directly to big business.

Perhaps the most progressive component of Biden’s bill is how he proposes to pay for it: raising the corporate tax rate from 21% to 28% and eliminating billions in subsidies that are handed out to fossil fuel companies every year. While this proposal is extremely welcome, two questions remain. Will Biden follow through? And is it enough? The first question depends on how ferociously we fight for it and demand big business foot the bill. The second however, has a simple answer: no. A 28% corporate tax rate is still below what corporations paid before Trump’s tax cuts in 2017, and fossil fuel companies in particular should be on the hook for much more.

In reality, mitigating the climate crisis and genuinely addressing the needs of working people – which Biden purports this bill does – will take far more dramatic action.

We cannot throw money at big business and hope that they’ll “do better.” We need to take the 100 companies responsible for 71% of global emissions into democratic public ownership. We need a radical redistribution of wealth from the hands of billionaires to ordinary people. We need a public infrastructure plan paid for by the super rich and corporations.

Just days after AOC first took office she, alongside the Sunrise Movement, made headlines by occupying Nancy Pelosi’s office demanding a Green New Deal. Now that the Democrats control the White House and both branches of Congress, and AOC and “the Squad” hold the balance of power in the House, they should use similar tactics to fight for a far more robust plan to tackle the climate crisis. The student climate strikes of the past several years give us a window into the explosive energy among young people to fight climate change. AOC and her collaborators in the halls of power should use their platform to organize a mass movement for a Green New Deal, Medicare for All and a $15 federal minimum wage connected to a strategy inside Congress of refusing to support Biden’s half-measures. Given all of Biden’s big promises, and the scale of the crisis faced by American capitalism, we could win sweeping reforms. The question remains: who is courageous enough to lead that fight?