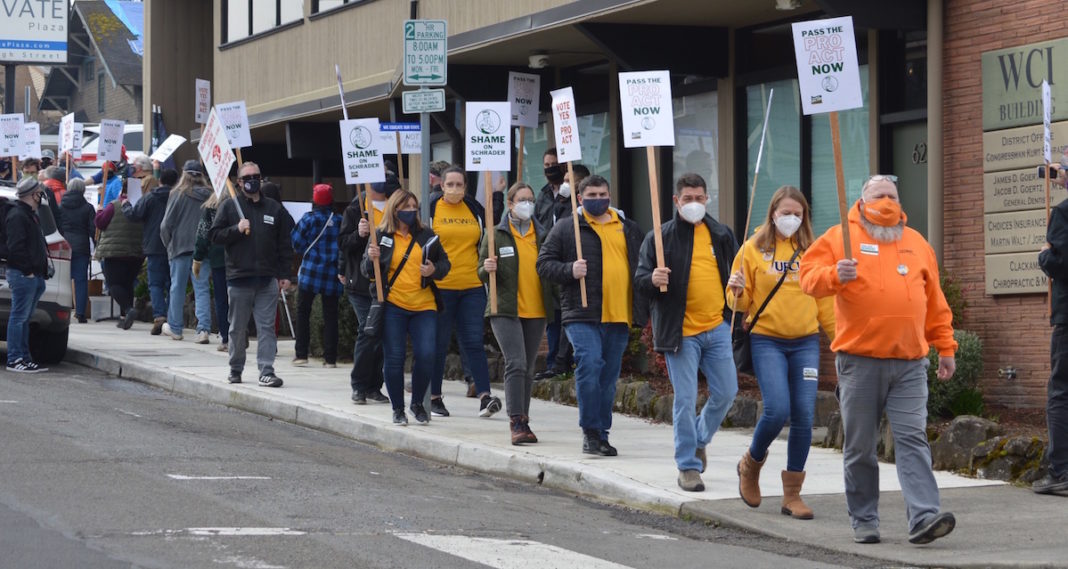 Justin Harrison is a member of CWA Local 13000, writing in personal capacity.

On March 9, the House passed the Protecting the Right to Organize Act (PRO Act) 225 votes to 206. If enacted, this would be one of the most significant pieces of pro-worker legislation since the 1935 National Labor Relations Act. The vote in the House sends it to the Senate where Wall St. and the U.S. Chamber of Commerce are hoping it will die an ignoble death at the hands of the filibuster.

As IUPAT vice president Jim Williams explained in Jacobin, the PRO Act would “outlaw right to work, which would help a lot of workers in the South and the Midwest. It streamlines and modernizes the election process for workers trying to organize. It takes away the employer’s ability to hold captive-audience meetings… It increases penalties for employers that do stand in the way of workers during an organizing campaign and puts restrictions on employers to prevent them from interfering.”

As a whole, the PRO Act would effectively re-legalize the militant class-struggle tactics that were used to build the unions in the 1930s and 1940s. Once again, unions could legally organize wildcat strikes and slowdowns, boycotts, and secondary pickets. Workers, union and non-union, could refuse to handle goods and services produced by scabs in a company where workers are on strike. Fears of “illegal actions” could no longer be weaponized against workers willing to take militant action to fight for what’s right.

Imagine what this would mean in the current fight to unionize Amazon. Union and non-union workers across the country could set up solidarity committees in their workplaces and engage in “concerted and protected” actions to support that organizing. But, while its passage would represent a sea change in the labor movement, it will take massive pressure from below to win.

We need to be clear that the reach of the PRO Act is potentially so significant that it is absolutely unacceptable to the bosses. Big business will spend millions of dollars to defeat it. They will put relentless pressure on politicians at every level of government to oppose it and flood the media with an aggressive propaganda campaign to discredit and distort the facts. They will try to frame it as if this is in the special interest of the “union bosses” and a “privileged layer” of workers, not the wider working class. They are already whipping up a fear campaign, saying that it will result in massive layoffs for freelance and gig workers. They’re looking for a repeat of their successful campaign around Prop 22 in California that exempted companies like Uber and Lyft from pro-worker labor law reforms. And if the PRO Act passes, they will try to tie it up in the courts to drag and delay things to the extent that we let them.

Lessons of 2008: The Defeat of the Employee Free Choice Act

The PRO Act is significantly more far-reaching than the Employee Free Choice Act (EFCA) that died in the Senate during the Obama administration. The AFL-CIO had declared EFCA to be a key legislative priority in 2008. By reforming the union election process, EFCA would have eliminated some key legal barriers to union organizing that tilt the balance of power so strongly in favor of the bosses. The AFL-CIO spent heavily on the 2008 elections with the promise that EFCA would be a priority for Obama. The “blue wave” gave Democrats a filibuster-proof majority in the House and Senate, but instead of pushing EFCA through, the Democratic Party, led by Obama and Biden, stalled for time and then used EFCA as leverage to pass the Affordable Care Act (ACA). The result was the defeat of EFCA and the Democrats didn’t even win a “public option” in the ACA.

If the AFL-CIO had come out aggressively swinging for EFCA and Medicare For All in 2008 — with street and workplace mobilizations, peaceful direct actions and occupations, and a march on DC linked with the threat of nationwide strike action — we would be having a very different conversation right now. Instead, the leadership of the AFL-CIO placed all our hopes in the hands of our “friends” in the Democratic Party and limited its strategy to basic activities such as phone banking the House and Senate before allowing EFCA to fade away into the night.

Working people can win the PRO Act. But we can’t rely on the Democratic establishment or their usual tactics to deliver it. They have a long history of making promises to labor to get their vote and then dumping those promises when elected.

We don’t need sad excuses or performative handwringing; no hiding behind Senate Parliamentarians or the filibuster and no backroom deals. If the Democratic Party was serious about passing the PRO Act, they would have already abolished the undemocratic filibuster. It is completely within their power to change the filibuster rules and force the pro-big-business opposition to debate these issues openly and defend their reactionary ideas in public.

President Biden has made verbal commitments to passing the PRO Act and included it in his infrastructure spending bill. There is talk of using the reconciliation process to avoid a filibuster to pass it. But the Democratic establishment is divided between the interests of their corporate funders and their election promises to working people.

DSA has launched its Pass the PRO Act Campaign working with several national unions. This is a good start and includes mostly phone banking efforts, but we will need more aggressive action as things heat up. In many ways, the working class is in a much stronger position than we were in 2008. Yes, society is more polarized and the needs of the working class more dire. But the #RedForEd movement, which started in West Virginia in 2018, and now the union drive in Bessemer, Alabama demonstrate working people’s willingness to fight for social change. We have a growing socialist left — with DSA the most visible example — that is making links with the unions. We have AOC and “the Squad” in Congress and a number of elected socialist politicians in various offices across the country. We have been through a year of pandemic and lockdowns, a year of essential worker struggles and strikes for working conditions and safety, a national urban uprising in support of BLM, and the Democrats hold Congress and the White House.

We need the unions, including the national AFL-CIO, to seize this historic opportunity and aggressively mobilize on the streets and in the workplace. Peaceful mass protests and direct actions in every major city, mobilized by the unions and the left (including “Squad” members and Bernie Sanders), would send a strong message.  We need look no further than what just happened to the $15 minimum wage in the stimulus bill to conclude that we can’t let them use this as just another bargaining chip to be thrown away when it’s no longer needed. We need an all-out fight to demand the PRO Act’s passage by any means necessary.

We can’t let Biden and the Democratic leadership hide behind centrist politicians like Manchin and Sinema, who opposed the $15-an-hour minimum wage, who oppose abolishing the filibuster, and who will likely oppose using Budget Reconciliation to pass the PRO Act.

Even if We Win, We Need to Mobilize

Winning the PRO Act is only the first step. It will simply tip the odds of the daily class struggle a bit, and take away the fear of “illegality” that has been used to instill fear in and prevent workers trying to organize with militant tactics for decades. Workers have defied these biased laws anyway; most of the #Red4Ed teachers’ strike wave was technically illegal, but the power of the movement prevented the state from enforcing these broken laws and workers won important gains for teachers, students, and public sector workers across the country. Fears of illegal action had to be seriously overcome in this strike wave, but in many other instances they are insurmountable as bosses and conservative elements of the union bureaucracy shove the threat of job loss, bankruptcy, and jail time down workers’ throats.

With the PRO Act, this would change dramatically. But fundamentally, labor laws, the legal system, and the courts always lean in the favor of the bosses. And while the PRO Act would be a game changer, to defeat the bosses will still require mobilizing the power of militant, organized class struggle against ferocious opposition.

We need to come out with a clear set of next steps if the PRO Act passes that includes taking on anti-union employers across the country. As a key part of this, the AFL-CIO should publicly commit to an uncompromising campaign of rooting out every last vestige of Jim Crow wherever we find it. It will take sustained, coordinated organizing and struggle on the ground to use the political space created by the PRO Act to organize against vicious anti-union employers and to win back the concessions we’ve made over the past 40 years.

Even if the PRO Act dies — or Biden trades most of it away for part of his infrastructure plan — this doesn’t mean an end to union organizing. Despite the historically low union density numbers today, the union drive in Bessemer gives us a window into potential new frontiers for the labor movement.

From #RedForEd to #BAmazon, a new generation of class warriors are taking the stage, willing to use their power to fight for better wages, on-the-job safety and working conditions, and to squarely confront the challenges of the 21st century. When we fight, we can win.