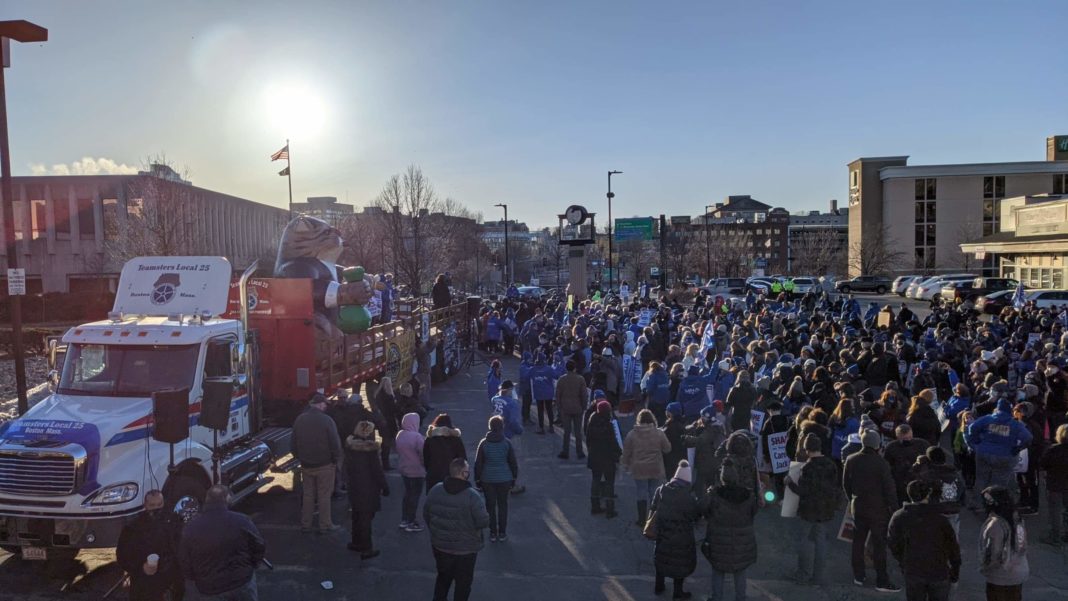 On Monday March 8, International Women’s Day, 800 nurses at Saint Vincent Hospital in Worcester, MA officially went on strike to fight for safe patient limits, adequate pay, and benefits that are on par with other hospitals in the area. 89% of nurses voted to authorize a strike on February 11, the same day that their greedy for-profit employer, Dallas-based Tenet Healthcare, announced a Q4 profit of $414 million in 2020. This is the same company that has ignored the nurses’ calls for safe patient limits for at least two years before it got to this point. The company even instituted mandatory furloughs and deployment of nurses to different units of the hospital that they may not be trained for, in the heat of the COVID-19 pandemic. These conditions have become intolerable to nurses who are taking care of too many patients at a time, and they are striking for patient safety until Tenet gives them a fair contract. The nurses were joined by crowds of hundreds of community and fellow union members at Sunday’s pre-strike rally and the first day of the strike. Worcester Socialist Alternative members have been out every day to show support at the pickets, and we encourage local groups and unions to enthusiastically take up the call from the MNA to adopt a day on the picket line! 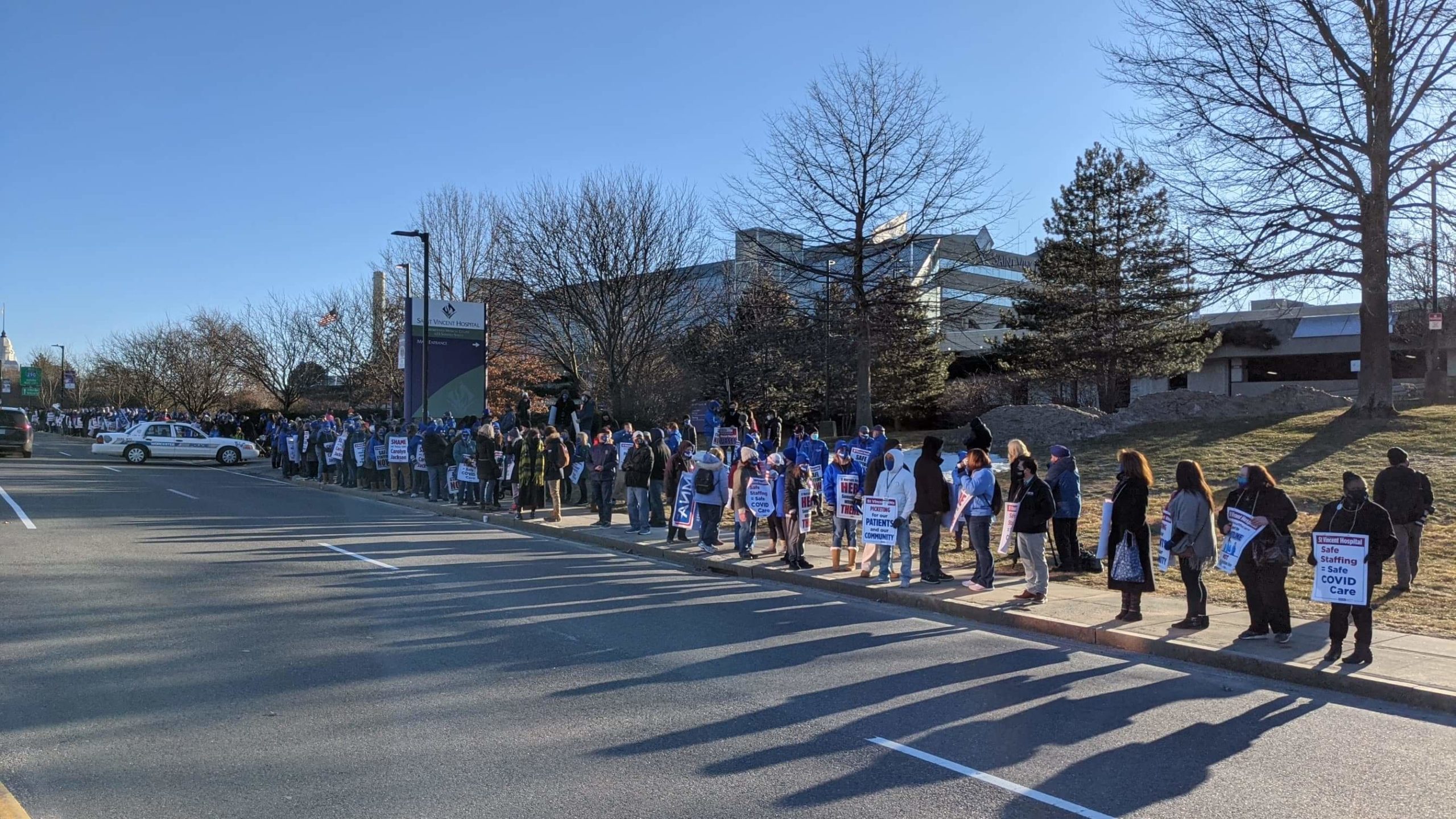 If you talk to any nurse on the picket line, they will tell you that they are out there because they feel it is more dangerous to work inside the hospital in its current state than to stand out and speak out against Tenet’s reckless care of patients. The hospital has been operating on a 1:5 ratio and even staffing levels of 1:6 have been reported since the nurses have been on strike! The nurses are demanding Tenet Healthcare impose the 1:4 recommended staffing limit on all floors since they’ve demonstrated that they have more than enough money to make that happen.  The company owns 62 hospitals nationally, Saint Vincent’s being one of the most profitable. It has a 14% profit margin, more than 3 times that of neighboring UMass Memorial Medical Center! Yet nurses find that the pay, benefits, and patient outcomes are comparably better at UMass and many leave to pursue their careers there after training at Saint V’s. 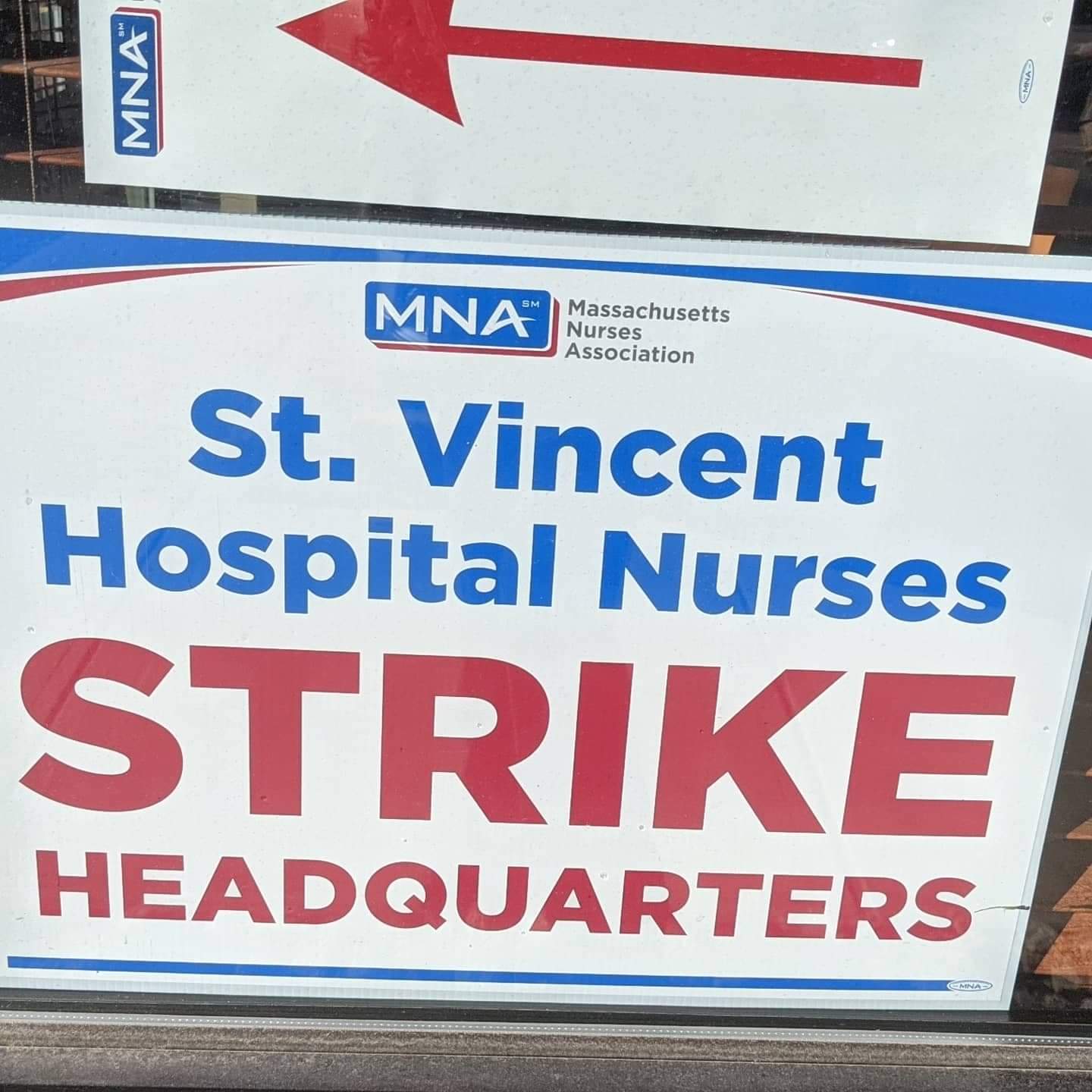 It’s also notable that 11 other Tenet-owned hospitals in California voted to authorize a strike back in October 2020. Tenet knows that if they give safe patient limits to Worcester’s nurses, they will eventually be forced to apply the standard to more or all of its hospitals, and we can expect them to hold out for a while until they are forced to cross that bridge. The disease of for-profit healthcare seeks to keep the interests of corporations above those of workers and people requiring life-saving medicine, which should be a basic necessity guaranteed for all. A victory for the nurses in Worcester would be a huge boon to the labor movement – particularly healthcare workers who have been put under tremendous pressure this past year. It is clear that the nurses’ fight is one that seeks to change the trajectory of hospitals operating as big businesses and return to a model that prioritizes community care.

Worcester vs. Tenet Healthcare: We need Cross-Union and Community Solidarity Until the End!

Tenet Healthcare has spent over $5 million on covering hotels, meals, and hourly pay for scab nurses to the tune of $120 per hour. Bright colored anti-union mailers have been sent to assure Worcester residents that Saint V’s is still providing the best care in the city despite hundreds of striking nurses on their steps each day telling the community otherwise. Tenet Healthcare calls the union “bullies” for tracking nurses who cross the picket line, while they have immediately taken away the nurses’ health insurance if they choose to strike. These workers risked their lives to protect everyone and provide the best care that was feasible during the pandemic this past year, which the for-profit healthcare system was brutally unprepared for. And this is how the hospital bosses repay them! Tenet’s pockets run deep but we need to show them that community and union solidarity runs deeper. Worcester SA calls on supporters to not cross the picket line for non-emergency reasons and for other union members to withhold any labor that would assist the hospital during the strike. Union locals should adopt a similar solidarity statement to that of Teamsters Local 170! 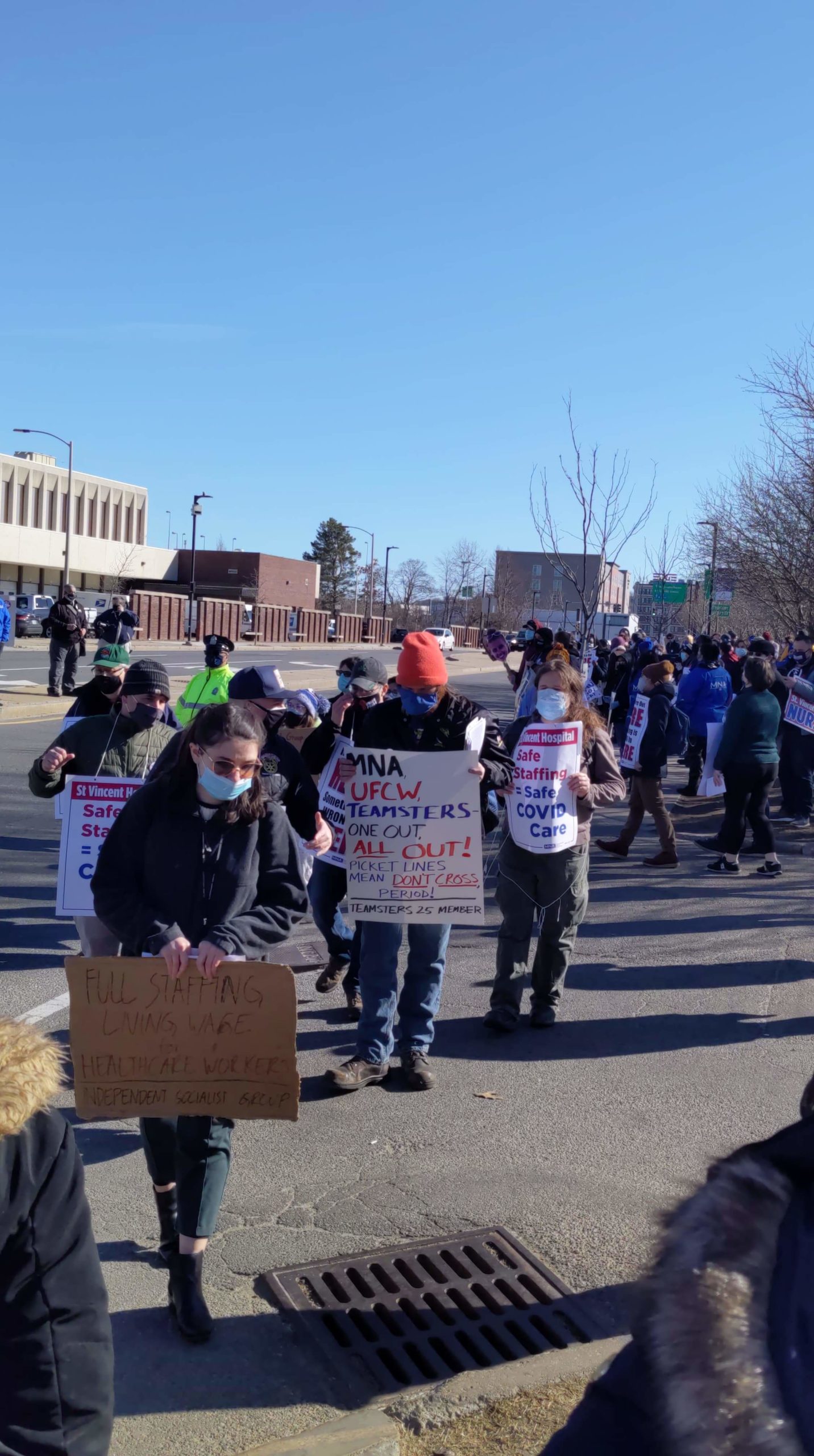 We also stand in solidarity with the 500 housekeepers, PCA’s, cafeteria workers, and others represented by UFCW Local 1445 who started holding informational pickets on Saturday March 13 alongside the nurses. Their contract with Tenet expired on February 28th over similar issues of safe staffing, pay, and patient care. There is a possibility that this second union at the hospital could join the strike, which would essentially leave nothing but replacement workers inside the hospital. Just a little over a week into the strike, there are already reports of extremely dangerous staffing levels of one personal care assistant to between 15 and 23 patients! To deliver a victory for all the hospital workers at Saint V’s, there needs to be maximum pressure applied to Tenet. Unions can play a significant role in collectively hitting the hospital’s profits to force a concession that would not only result in a victory for the nurses, but would have the potential to spread to hospitals across the country who share the same safe staffing issues. This is a pivotal moment for the Worcester community as a whole to witness how far corporate greed will go before it is faced with no choice but to give into the demands of the working class. An injury to one is an injury to all!

Watch an interview with striking nurses on the picket line: https://fb.watch/4h172GsMPO/