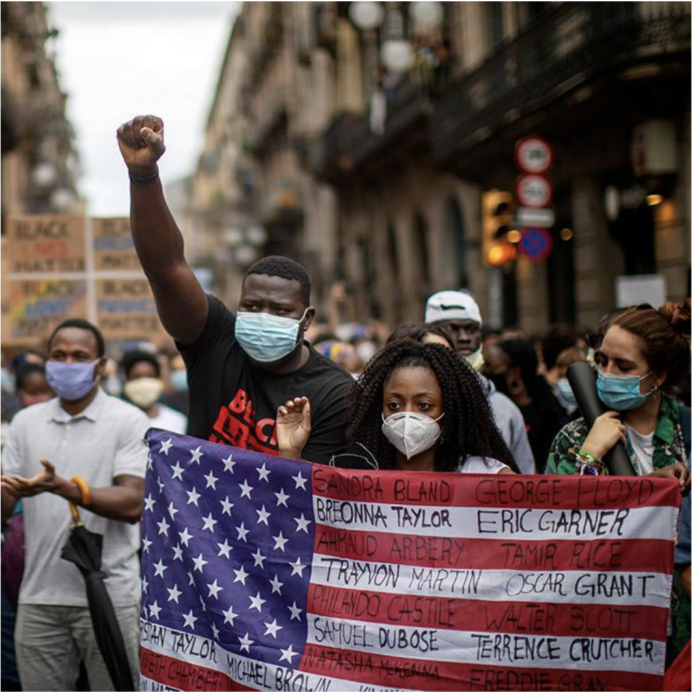 For the last four years, Trump has roused and built a mass base around his reactionary agenda and given encouragement to organized racist, xenophobic, and fascist groups. As we saw through the events on January 6, the racist far right – while still small – is feeling emboldened.

With the Democrats now in control of the White House and both branches of Congress, it’s not enough to hope they take steps to end racial violence or institutional racism. In fact, the measures that would do the most to erode the legacy of racism in the U.S. are things the Democrats will viciously oppose: ending mass incarceration, dismantling segregation, and a massive redistribution of wealth to working people – which would disproportionately benefit the Black and Latino working class. Now, more than ever, attacks on Black and brown workers are threats to all working people. We urgently need to build a mass, multi-racial movement of the working class to fight for these things.

We Can’t Trust the Democrats

Biden’s record in Congress, including speeches you can watch on YouTube, make him seem downright racist by today’s standards. He championed the 1994 Crime Bill and other “tough on crime” policies in Congress that led to the rise of mass incarceration that has decimated Black and brown communities. During the George Floyd rebellion over the summer, Biden repeatedly suggested police should be trained to shoot people in the leg to avoid fatalities, while doubling down on his belief that we need more money for cops.

Then maybe other Democrats? Let’s go through the list of Democratic run cities with militarized police departments and where racist police murders went broadly without justice: Minneapolis, Columbus, NYC, Cleveland, Oakland, Tallahassee… need we go on?

Obama and Biden coordinated the suppression of the post-Ferguson BLM uprising throughout the country in 2014 and 2015, working alongside their Democratic counterparts in state and local government. What gains came out of the movement were small, technical concessions from Democrats like body cameras, which now either further capture police violence or get turned off just before violence occurs.

Obama and Biden’s Wall Street bailout after the 2008 economic crash left millions of Americans unemployed and without stable housing. This hit Black and brown working-class communities particularly hard, which suffered higher rates of unemployment, foreclosures and evictions, and a massive loss of wealth.

This summer the American ruling class was shocked by the multi-racial Black Lives Matter rebellion that swept cities and towns across the country. It is the fear of exactly this type of mass movement that has Democrats making big promises today in an attempt to prevent this type of unrest.

We can’t afford to take them at their word. The Black Lives Matter struggle will need to continue with even more determination under a Biden administration and Democratic control. It is only through this type of sustained, mass pressure that we can win far reaching demands for Black Americans and the multi-racial working class.

Key to our success will be the involvement of the labor movement who, with some notable exceptions, largely sat out the rebellion this summer. Fighting racism is not a peripheral issue but a central priority for workers everywhere. We need a renewed labor movement prepared to fight tooth and nail to organize the unorganized, to fight against discrimination on the job, racist police violence, and to fight for a sweeping program that will benefit the entire ranks of the multi-racial working class. As the old working class maxim goes: “an injury to one is an injury to all.”