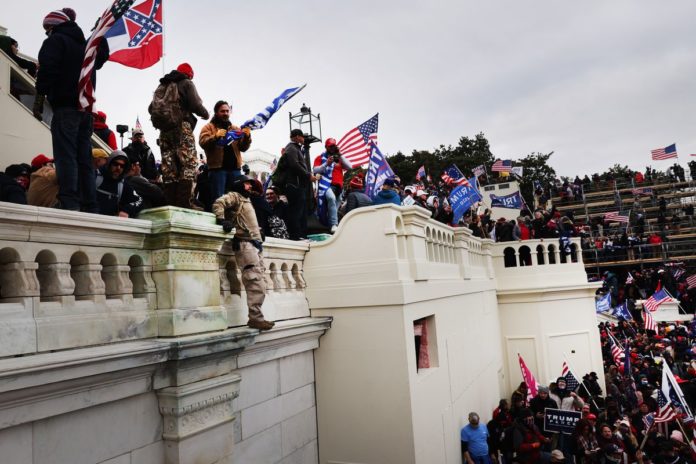 The far right threat isn’t going away after their attempted coup on January 6th. Immediately, they are planning another series of armed rallies and possibly more attempts to overrun legislative buildings starting this Saturday, January 16 and culminating in a potential showdown on Inauguration Day, Wednesday January 20.

As we saw with the Capitol riot and with the ongoing history of racist police murders, we can’t depend on the cops to defend people from the far right. Instead, the labor movement and left leaders like Bernie, AOC, and the Squad should be calling for and helping to plan mass demonstrations to drive fascists, racists, and the far right in general off of our streets from January 16-20. We saw how effective mass rallies were in 2017 after the “Unite the Right” rally in Charlottesville, when 40,000 people in Boston drove the fascists off the streets, not just in Boston but nationally.

Empty words from labor leaders or theatrical actions by politicians won’t be enough to defeat the ongoing threat of the far right. While we support impeachment or other constitutional measures to remove Trump from office, we do not think that the left should focus its energy on building support for impeachment. In the critical hours and days after the Capitol siege, the Squad wrote up articles of impeachment which were almost indistinguishable from the articles now on the table from the establishment. They explained this strategy as a way to prevent Trump from running again in 2024, but this disqualification is not automatic and it’s only the Senate – and only with a two-thirds vote – which can lock Trump out of elected office. Beyond all the wonky challenges with this approach, it’s also not an effective way to actually neutralize the far right. Even if Trump is barred from running again, another far right leader would run in his place.

While the key immediate task is to deliver a blow to the extreme right and fascists, the struggle against the far right and right populism generally, which has an audience of millions, will not be won in the next two weeks. The ruling class has now turned on Trump who crossed a red line for them by directly attacking their core political institutions. Corporations are pulling funding from Trump and other key Republicans who supported him like Ted Cruz and Josh Hawley. Twitter has banned Trump for life. But the right will not be defeated by the tech bosses who have enabled them for years. We know that tomorrow such measures will be used against the left as part of a campaign against “extremism.” But as socialists, while placing no reliance on the establishment, corporate America or the state, we are for actions being taken against the far right like the purging of the state forces, including the police, of known racists and anyone with ties to hard right and fascist groups.

As Socialist Alternative has said, there is the potential for fascists and other extreme right wing elements to grow under a Biden administration overseeing deep problems of capitalism. The Tea Party grew under Obama after the bailout of the banks. We can’t effectively undermine the far right by uniting with a corporate-controlled Democratic establishment that creates the opening for these ideas and enables them by attacking the interests of working people again and again. Instead, we need to build a working-class united front that struggles against the racist threats and puts forward a program to address the economic, health and social crises in society.

A determined movement against the far right should also point toward a broad program that can unite working people, demanding Medicare for All, comprehensive COVID relief for working people, and an end to racist policing. This should be combined with mass action to stop the far right from peddling their lies on our streets. Small adventurous confrontations with violent far right elements shouldn’t be our focus. We need a mass movement of millions now more than ever.

Socialist Alternative calls for emergency meetings of union activists, socialists, and community organizations to plan mass actions from January 16 to 20 to defeat the right-wing threats. Successful actions against the far right could help launch a united front to fight against racism and the billionaire class. These problems haven’t gone away. The threat is immediate, and we need to act with urgency. Even if the violent racists are driven back in the coming week, the far right could still grow, and it is essential that the left and labor movement take this ongoing struggle seriously.