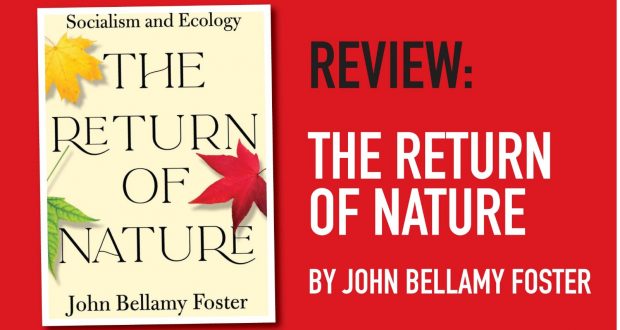 John Bellamy Foster’s ground-breaking Marx’s Ecology in 2000 demonstrated that Marxism, from the beginning, dealt with ecological questions. Its long-awaited sequel, The Return of Nature: Socialism and Ecology, developed these ideas from the deaths of Marx and Darwin to the 1960s, tracing a continuous thread of dialectical thinking about the environment. It is a meticulous study of the co-evolution of socialism and ecology citing a huge wealth of sources, including the significant contributions of Engels, the “Left Darwinist” Ray Lankester, and the Romantic Marxist, William Morris.

Much of 19th century science celebrated the domination of humans over nature. Engels explained that the division between mankind and nature was not inevitable or permanent but was a direct consequence of the emergence of private property, as the robbery of the Earth was the foundation of the economic system. Instead, human society is a part of, and arose from nature, while simultaneously acting upon nature; humanity creates and operates according to its own laws but is still subject to the natural laws of physics. There is no absolute opposition between nature and society; using a dialectical materialist approach accounted for the changing and contradictory nature of existence in the world.

In Anti-Dühring, Engels wrote that:

“Nature is the proof of dialectics, and it must be said for modern science that it has furnished this proof with very rich materials increasing daily”.

Darwinian evolution was a ground-breaking example, but he also argued that the so-called constants of physics were often the points at which a quantitative change becomes qualitative change, such as the freezing and boiling points of water. Another example is the conversion of hydrocarbons into distinct compounds by lengthening or shortening the chain of carbon atoms.

For Marx and Engels, the materialist conception of nature and the materialist conception of history were reflexively connected, just as the alienation of nature and the alienation of labour were. William Morris expanded on the concept of alienation by arguing that capitalist production and division of labour caused a deep disconnection of the working class from their work, themselves, the natural world and their belonging to a broader ecological whole. As a Romantic socialist, he writes that art is the worker’s pleasure, freedom and individuality in his daily necessary work, something that is crushed by capitalism.

Foster documents the brutal conditions imposed on the working class, beginning with Engels’ 1845 The Condition of the Working Class in England. In industrial towns, the working class lived and worked in filth and squalor, with a lack of sanitation or healthcare, air and water pollution, poor nutrition and adulteration of food, at constant risk of crippling injury and ultimately premature death. Engels called the early death of working class people, linked to their environment and conditions, “social murder” at the hands of capitalists.

Morris writes of the inherent wastefulness of capitalism in terms of the purposeless goods produced for the wealthy, the socially unnecessary toil expended, the misery and wasted lives of workers, pointless bureaucracy and destruction of the environment. He was among many who critiqued the rapacious destruction of forests, depletion of soil nutrients, pillage of the seas, and pollution of the air and rivers with smoke and sewage wrought by industrial capitalism. Some warned against the scale of human interference with the complex ecological systems which was unbalancing the metabolism of nature with unknown consequences. These socialists rejected a Malthusian approach of blaming over-population and placed the blame squarely at the feet of the capitalist drive for expansion and profit, rather than humanity as a whole.

In the late 19th century, Lankester emphasized that humanity was walking on an ecological knife’s edge, but we have long been traveling on a trajectory to total disaster. In a society dominated by pursuit of short-term profit, capitalist expansion, and with power concentrated in increasingly fewer hands, science, technology and production can have dangerous results. Capitalism is incapable of balancing the needs of profit with the genuine needs of society as a whole — it cannot be done.

The warming of the atmosphere; the destruction of the world’s forests by agribusiness and fires; the massive loss of habitats and biodiversity; extreme weather events; and the pollution of the water systems with microplastics; these realities have been furiously suppressed or dismissed by capitalist establishments for decades. Today world capitalism is vulnerable, being in the throes of manifold crises — the pandemic, economic depression, mass unemployment and destitution, inter-imperialist competition, climate catastrophe, and, our only hope, the potential of mass action by the working class.

The Return of Nature narrates a century of dialectical ecological scholarship, providing a tool for developing our understanding of the deep current of ecological thought in the emergence of socialist ideas. Unfortunately, the book falls short of being any sort of guide to action. Nevertheless, in the final sentences, Foster outlines our urgent task;

“what we must dethrone today is the idol of capital itself, the concentrated power of class-based avarice, which now imperils the ecology of the earth.”