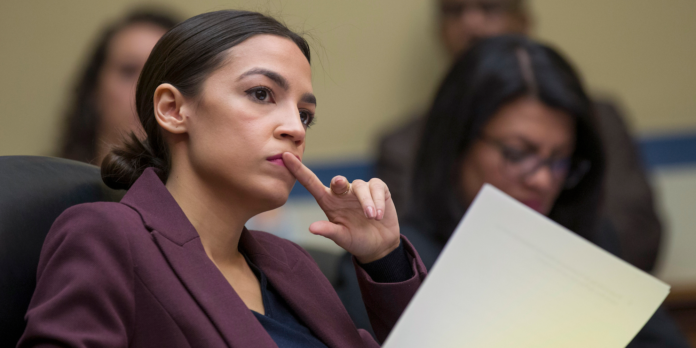 When could it possibly be more obvious that a Medicare for All type healthcare system, guaranteeing healthcare to all and eliminating private insurance, is an essential and moral reform for the United States? We are in the midst of a pandemic-triggered economic crisis that has left nearly 15 million unemployed workers without insurance, while COVID rips through the country, killing thousands of people each day.

This question is part of the background for the call initiated by comedian and political commentator Jimmy Dore that Alexandria Ocasio Cortez should demand that a floor vote be held in the House on Medicare for All legislation. If Nancy Pelosi refuses, says Dore, then AOC should refuse to vote for her to continue as Speaker of the House.

Another critical piece of background is that AOC wouldn’t have to recruit a whole lot of House members who were willing to defy the establishment. Pelosi doesn’t have much breathing room after the Democrats lost seats in November. The Democrats’ narrow nine seat majority in the new Congress means that an organized group of genuine progressives in the house could hold the balance of power and force the Democrats to make concessions, especially if this is linked to mobilizing people on the streets to demand action.

AOC, entering into a Twitter debate with Dore and Los Angeles Chargers running back Justin Jackson, has argued that there’s no point to staging a vote on Medicare for All only to lose it, and that progressives’ focus should be on “winnable” measures like a nationwide $15 minimum wage, which Biden has said he will support. But staging a high profile vote on the floor of the house in the short term, even if the progressives lose, should be part of a comprehensive strategy to win Medicare for All. Such a strategy would have to combine the considerable influence of congressional progressives like AOC with a movement-based approach to mobilize millions of workers to take action.

A floor vote on Medicare for All could be combined with other parliamentary moves – David Sirota outlines several – that would be strategic for building a powerful movement. One particularly interesting option would be to try and pass legislation that would allow states to implement their own single-payer systems. This could help galvanize movements in the states and force the hands of Democratic lawmakers where they hold majorities in state legislatures, as in California and New York, to either push for single-payer systems, or expose themselves for failing to fight for it. As AOC has argued, failure to support Medicare for All appeared to be a factor in the Democrats’ loss of congressional seats, with no supporter of it losing their seat in a swing district.

Nationally, the health insurance industry raked in an estimated $1.2 trillion in revenue in 2020. The political establishment, including both Republicans and Democrats, is directly backed by the billionaire class that reaps massive profits from the healthcare industry and pharmaceuticals. These corporate-backed politicians will not allow single payer legislation to go through except under the pressure of a truly enormous mass movement that is backed by the credible threat of organized labor to shut down key sections of the economy.

The new stimulus deal that has just been passed as this article goes to press – correctly described as “too little, too late” – shows the incredible incompetence of the whole corporate political establishment when left to its own devices. Thirty seven million Americans don’t have enough to eat. A Moody’s economist is predicting that Americans will owe $70 billion in rent and utilities debt in 2021. And yet we’re being given pathetically small $600 checks. If we had a political party that truly represented working people, its job would be to lead a fight for a realistic response to this crisis, including a serious bailout of working class people, Medicare for All and other critical economic reforms funded by taxing the billionaire class. Instead, the Democratic establishment sabotaged a larger bailout  before the election, and the current package includes the stimulus checks only because independent Senator Bernie Sanders and Republican Senator Josh Hawley insisted on them.

Medicare for All is winnable. It’s not a question of patiently waiting for several more congressional election cycles over years to increase the number of progressive members of Congress. It is a question of developing a mass movement on a historic scale which has the active support of at least a significant section of union members. AOC and other members of “The Squad” can use their positions and media platforms to build this movement in a coordinated and strategic fashion, including staging a well publicized vote on the floor of Congress. But in order for AOC to play a leading role in the fight for Medicare for All, she will have to repeatedly come into conflict with the leadership of her own party. If the fight for universal healthcare isn’t linked to a political movement that is independent of the corporate-controlled Democratic party, then it will fail.

It’s premature to call AOC a sellout, as Jimmy Dore has, because she won’t organize for a floor vote on Medicare for All. But it’s positive that there is debate on the left on the tactics needed to advance the fight for universal healthcare. Ultimately, what could prove AOC’s undoing as a true representative of working people is her unwillingness to fully break from the Democratic Party leadership.

The pandemic-induced crisis has upended the lives of virtually the entire country, and tens of millions of low income workers who are disproportionately Black and Latino, have borne the brunt of the economic and public health chaos. Millions of uninsured and underinsured people don’t have the luxury to wait for a more opportune time to win Medicare for All, especially as they’re battered by unemployment. There is an urgent need for a new political party to combine the forces of organized labor, progressives, and The Squad, to fight tooth and nail for Medicare for All in the streets, in our workplaces, and in the halls of Congress.