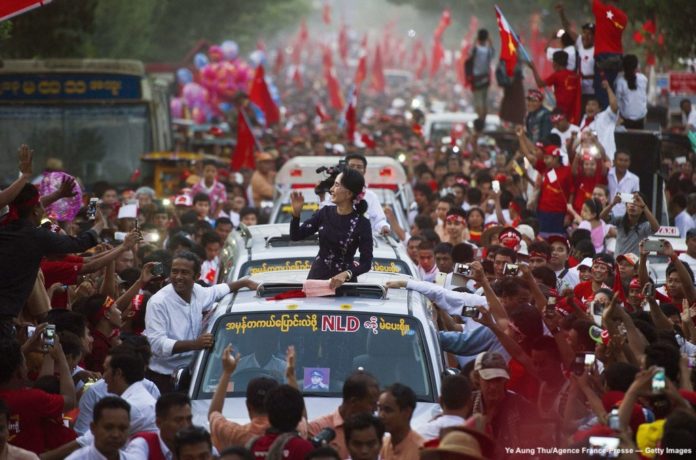 Election victory for Aung San Suu Kyi and the National League for Democracy, but no change to come in crisis-ridden Myanmar

Aung San Suu Kyi’s party, the National League for Democracy (NLD) has won the majority of votes from the election on November 8th, beating the military-backed Union Solidarity and Development Party (USDP). A final confirmation of the results is still awaiting, but the NLD is on track to take 399 of the 642 seats, compared to just 28 for the USDP. Military officials with the USDP are complaining loudly about the legality of the results and threatening legal proceedings, and many regional ethnic parties have also won seats. In Rakhine State, the local Arakan National Party beat the NLD, even though voting was limited to only 25% of the local population.

Aung San Suu Kyi, for years the figurehead of the resistance against the military regime, has become a mouthpiece for it, and continued the policy of oppression of minorities. She even went voluntarily to the International Court of Justice in The Hague to defend the horrific violence against the Rohingya, leading to a wave of international criticism. In her own country, the NLD could win the elections convincingly as popular aversion to the generals is huge. As one voter from Tarmwe put it: “the NLD is the best bet to keep the military from returning to power, even if I would prefer to vote for another party”.

Yet, in the context of a health crisis and economic downturn, Aung San Suu Kyi’s NLD has no answers for the masses. It faces a backlash over economic policies after increasing electricity prices and, in the middle of the Covid 19 lockdown, tens of thousands are reportedly going hungry in the country’s largest city Yangon . After all, a more democratic form of government is not enough for real change. The only reason that the NLD can still get support is because none of the opposition parties offer a coherent economic alternative.

The Covid crisis has hit Myanmar especially hard; with decades of rock-bottom spending on healthcare since the 1962 military takeover. According to a 2012 Asian Development Bank report, “Myanmar is the only developing Asian country with a defense budget that is greater than the education and health budgets combined.”

The years of failure by the military over health spending left Myanmar completely unprepared to handle the Covid crisis. Recorded deaths from Covid jumped to 1,461 on November 11th, up 226 from the previous month, and hospitals are desperately struggling to cope. Filled to bursting point, and lacking proper equipment or protective clothing, large numbers of volunteers have had to step in to plug the gap.

Vital healthcare assistance has also been difficult to come by for the members of Myanmar’s various ethnic groups, such as the Rohingyas; the Muslim-majority people from Rakhine State, many of whom have been forced to flee to neighboring Bangladesh. A 2019 World Health Organisation report painted a dire picture of the health crisis among the Rohingya people in the refugee camps; yet for the Rohingyas and others, this comes on the back of vicious state repression.

The Rohingya genocide is one of the most horrific features of the recent history in the region, with military attacks on villages forcing over 700,000 Rohingyas to flee. Those still in Myanmar continue to face further attacks as well as sexual assault and rape, and end up detained in camps that Human Rights Watch calls “open prisons”. Conditions there amount to appalling squalor, with many forced into the camps being held indefinitely.

And to add to this, almost 2.6 million voters from different ethnic minorities — including about 1.1 million Rohingyas — have been excluded from voting in the elections. The Rohingya people, wrongly labelled as “Bengalis”, still have no pathway to full citizenship in Myanmar, as both the NLD and the military serve to represent the interests of the majority Bamar people (who are mostly Buddhists). Yet of course, ordinary, working-class Bamar people have nothing to gain from the NLD, a party wedded to capitalism, or from the military.

In Rakhine State (also called Arakan), the Burmese military — the Tatmadaw — is locked in combat with the Arakan Rohingya Salvation Army (ARSA), yet this is just one example of how “ethnicity and conflict are inextricably linked in Myanmar”, according to the International Crisis Group. There are around twenty different ethnic armed groups fighting the military, including the United Wa State Army, the Kaungkha Militia in the northern Shan State, and the Karen National Liberation Army.

Aung San Suu Kyi’s voluntary defense of the military at The Hague, over the Rohingya genocide, may have galvanized her support amongst Bamar Buddhst nationalists, but this has also increased local support for the various ethnic parties. A token approach by the NLD towards ethnic minority parties will not solve the many national questions of the country.

The military and the NLD

Besides the many ethnic parties, the NLD’s main opponent was the Union Solidarity and Development Party (USDP) — the party formally backed by the military, and the one which was in power when Aung San Suu Kyi was under house arrest. Under a nominally more ‘democratic’ system, the USDP has long been losing votes to the NLD, who have constitutional reform as one of their key aims.

However, 25% of parliament seats are reserved for the military, meaning that constitutional revision is a pipe dream. A 75% majority is needed for amending the constitution, allowing the military to easily block any changes.

The military establishment may now see Aung San Suu Kyi as slightly more “trustworthy” than before, given her defense of them at The Hague and the international backlash against her. She has even previously stated that she is “fond of the army”!

After the 2015 election, we published an article which highlighted the hypocrisy and anti-working class character of the NLD: “Aung San Suu Kyi’s program embraces capitalism, globalization and the economic prescriptions of the IMF and World Bank. Implementing such policies, which everywhere make the rich richer and poor poorer, requires a continuation of repressive measures and a state machine under the control of the elite to hold the poor majority in check.”

Government spending on health and education has not gone up under Aung San Suu Kyi’s government, but actually further declined as a share of GDP. The health crisis and its consequences, in a country where four out of five workers are active in the informal sector, will require at least some public investment. Lower gas prices are however putting pressure on the country’s income. In 2018/19, gas accounted for 40% of exports and 20% of government revenues. Income from tourism fell as a consequence of the pandemic.

As we also said then, and which certainly remains the case today: “The struggle for democracy … cannot be realized within the framework of diseased capitalism and imperialism. The only force that can sweep away an authoritarian regime and replace it with a genuinely democratic form of government is the working class supported by the other poor and oppressed strata of society… The way forward is by building a workers’ alternative — a mass socialist party under the democratic control of its members — and overthrowing capitalism”.