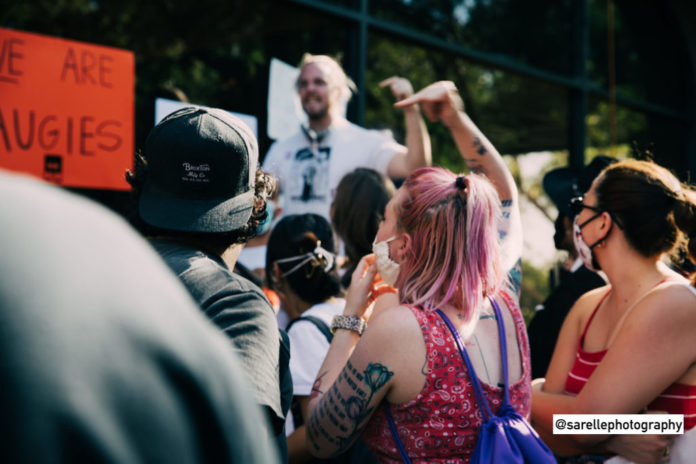 The struggle began only weeks earlier when workers confronted management over their failure to provide PPE and health accommodations for employees despite remaining open and operational throughout the pandemic.

Sean and his coworkers helped stage a “sick out” in June to protest the lack of COVID-19 safety precautions. The company eventually produced masks and required masks of their customers, but they were sold to customers before they were provided to workers for their safety.

Under these conditions, long-time employees Kelley Bader and Matt Soliz discussed unionizing with fellow baristas. About 80% of the 56-employee retail staff signed union cards, and within two months, the union went public to demand recognition from the owners. The owners agreed to a meeting with the union, staging a “Town Hall” eight days later that ended with a weak commitment from the owners to “research unions.”

A few days later, the workers were let go without warning: Augie’s Coffee announced it was closing all five of its retail locations, instead focusing exclusively on the warehouse and roastery parts of the business, which remained unaffected by the pandemic and the union drive.

Augie’s Coffee claims it closed due to profit loss and concern about the health of its customers. These claims are inconsistent with its decision to remain open during the worst months of the pandemic. They also do not explain why the owners fired two pro-union warehouse workers and replaced them with anti-union retail staff. Their concern about public health has apparently expired, as the owners recently applied for a permit to open a wine bar. The union blocked the effort by organizing community members to write in their opposition to the city of Redlands.

Augie’s Coffee has not responded to union representatives since the town hall. To build public support and raise money for members, the union and former Augie’s workers hosted numerous pop-ups partnered with other coffee shops. “It’s nice to be working again,” Bader said after serving coffee for the first time in weeks. Their initial pop-up had the atmosphere of a family reunion, with many coworkers seeing each other in person for the first time since their mass firing.

As of 2019, 12.3 million workers in the United States were employed as food service workers. Non-supervisory food service workers take home median wages below $11 and work less than 25 hours weekly on average. (By making workers part-time, owners are able to deny them benefits). Only 1.4% of them are in a union, compared to 10.3% of workers overall.

The pandemic, massive layoffs, and governmental failure to address the crisis has pressured workers to comply with harsh employers. Even in ‘normal’ conditions, unionization in food service faced obstacles due to high turnover and employees viewing food service as a temporary job.

Despite obstacles, workers in the service industry have signaled their willingness to fight back. Two other coffee shops—Gimme! Coffee in Ithaca, NY and Spot Coffee in Rochester and Buffalo, NY—have since 2018. In Minneapolis, craft distillery Tatterstall recently won recognition of its union. Craft brewery workers nationwide have made similar efforts, signaling the potential for mass struggle.

Fast food worker struggle has sharpened over wages in recent years. The fight for a $15 federal minimum wage led to numerous fast food strikes and sit-ins from 2012 to 2015. In April 2015, tens of thousands of fast food workers went on strike in more than 200 cities. They were joined by workers in other low-wage occupations, resulting in the largest low-wage labor demonstration in U.S. history.

Unfortunately, many of these strikes were extremely short and were intended to serve as symbolic resistance rather than part of a concrete strategy to secure higher wages.

The fight for a higher living standard for the food service industry will require cross-sector solidarity against corporations like McDonald’s, Burger King, and others. Such a mobilization would require trucking, warehouse, and food processing workers to join the struggle, as corporate profits are dependent upon them.

Logistics and Service Workers Must Unite

We need unity between front-of-house food service workers and the army of logistics workers behind the scenes. The story of Augie’s Union illustrates this point.

The owners of Augie’s Coffee have been able to remain profitable without its retail locations due to its warehouse and roastery. Though two warehouse workers joined the union effort, Augie’s Union was unable to win over the majority of the warehouse staff. As a result, the owners were able to terminate their retail staff seemingly without loss to their bottom line.

Socialist Alternative supports Augie’s workers for starting the fight against their bosses. We urge the warehouse workers of Augie’s Coffee to join their fellow workers in struggle. It’s only through solidarity and united struggle that workers will be able to secure real gains from our bosses.