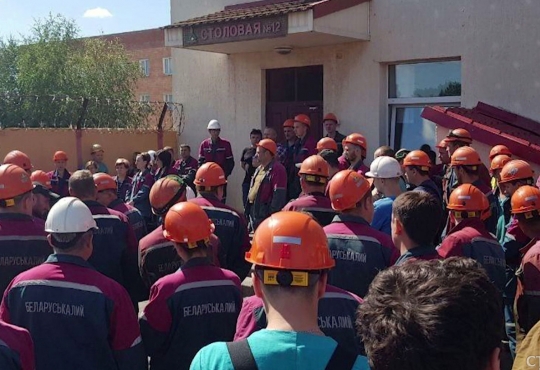 Since the beginning of August, and the declaration of the fraudulent election result that saw Alexandr Lukashenko claim victory, mass protests have rocked Belarus. Protesters have meet violence, repression and arrests. A turning point in the protests, when the police regime was forced to ease its violent repression, came when workers in over a hundred factories set up strike committees and declared strikes. One of the most effective strikes took place at Belaruskali in the city of Soligorsk, where miners produce one fifth of the world’s supply of potash. Following this, five members of the strike committee: Anatoly Bokun, Yuri Korzun, Sergey Cherkasov, Sergey Taras and Pavel Puchenya were arrested and have since been in jail.

On August 14, workers at the company’s number one mine met and drew up a list of demands. Later that evening workers from across the company together with local residents rallied outside Belaruskali’s head office to present our demands to the General Director, warning him that if they were not met by August 17 we would declare a strike. By that date, strike committees had been formed at each of the company’s sites, Anatoly Bokun was elected as President of No 1 mine’s strike committee and Joint president of the whole strike committee. He became the public face of the strike.

The demands of the strike committee are:

As soon as the strike started, production levels fell to 10%. Immediately, management started to threaten the strikers with sackings, loss of bonuses, criminal charges and with being sued for losses caused by the strike. They tried to persuade others not to join the strike but by the 18th, we had collected over 6,000 signatures. By the 20th real repression started.

Dmitry Kudelevich, a member of the strike committee stopped answering calls. He later explained he had been arrested by the KGB, un-renamed since Soviet times, but managed to escape and fled to Ukraine. Belarusian supporters living in Oslo picketed the Headquarters of YARA International, Belaruskali’s biggest customer. At the same time the global trade union IndustriALL and the Belarusian Independent Trade Union asked their members in Norway to intervene, asking Yara to invite their business partners in Belarus for negotiations.

The next day Alesya and Vladimir Loginov, members of the strike committee went missing. They were found arrested by the Soligorsk police. Anatoliya Bokun, driving through the town had his car blocked by police and was detained on false charges. Police pressure on another strike committee member Pavel Sechko forced him to withdraw from the committee. On the 23rd Roman Leonchika was arrested outside his home.

The majority of workers who returned to work found the management promises were broken — their annual bonuses stopped and several were sacked. On August 24 the strike committee called on those who had returned to “work to rule”, obeying all safety and hygiene instructions. We received information that 20 strikers were to be sacked. These included many members of the strike committee.

On August 31 Anatoly Bokun was again arrested and this time sent to prison for 15 days. In court he informed the judge that he suffered from chronic lung disease, but he was sent to the remand prison where he was left without shoes on a cold concrete floor. He was sacked for being absent from work.

These actions are typical of those that continued right up till the middle of September, then they took a turn for the worse. On September 9-10, leaders of the workers were “invited” to the “Department for the fight with organized crime and corruption” for a “discussion”. During their visit, they were warned about the law against terrorism and the violent overthrow of the government. The authorities now equate a peaceful strike with “terrorism”.

Despite all these threats, workers are continuing to protest. On September 10 Yuri Korzuna went into the mine and at the 305 meter mark handcuffed himself to the mining equipment. He added his own demands to those above, including the release of all arrested strike committee members and an end to repression of striking miners. He was threatened with violence and forcibly removed from the mine and bundled into an ambulance. A column of vehicles in support followed him to the hospital.

Now those arrested started to get longer sentences. The author of this article got seven days for supporting Yuri Korzuna. Then former President of the Independent miners’ union Sergey Cherkasov was sent down for 15 days after taking part in a peaceful protest. So too was Roman Leonchik. Alekcandr Novik and Pavel Puchenya face a month in jail for two charges of taking part in peaceful protests. Another miner, Oleg Kudyelka decided to handcuff himself underground. He was released and taken to a psychiatric hospital “for observation” 22 miners who supported him were arrested. This time Anatoly Bokun received a 25 day sentence.

On October 3 there was the mass arrest of people taking part in a “tea-drinking” party in one of the city parks. Among them, strike committee members Nina Tulaeva and Aleksey Kryzh received hefty fines, Yuri Korzun, Sergey Cherkasov and Pavel Puchenya were sentenced to between 7 and 15 days in prison.

The authorities have no way out of this crisis. Their only answer is crude repression. After the first few days when there were vicious attacks by the riot police they were forced to retreat by our strike. So then they started taking people to court and fining them for participating in protests. When they realized that people wouldn’t pay the fines, they started jailing people. Every time they use the same methods, the same witnesses, usually the police and with no regard for whether the cases are justified or not.

Of course, there is still a layer of people who are far from politics. And different attitudes to Svetlana Tikhanovskaya. Some think that she should be recognized as President. But the majority of workers do not trust her. That’s why the strike was necessary, a strike that developed spontaneously. As a result of these actions, the masses have become more politicized and many now understand that Tikhanovskaya is just a talking head. If we can get our message across now, to explain to workers why we need to fight and for what, I think we could see more strikes.

We now need a strike in all factories and workplaces, this would show workers once and for all that we have the power, that we can insist on our demands and rights. We are convinced that if there was such a national strike then the police and army would also come over to the side of the people.

Gorbaty (General Director) and his hangers on are doing all they can to squeeze as much profit from us for them and their relatives. All you are left with is money to buy medicine.

The list of illnesses miners suffer from is long, and if earlier they were considered professional, now it is impossible to prove that. Is it even worth fighting about this as many of you won’t live till your pension, when the average life expectancy of a miner is 46,5 years?

The state squeezes what they can out of us and then just discard us. They won’t even have to pay the miserly pension. But then the pen-pushers will have their luxury homes and cottages, and the moustachioed one alone has 18 residences!

But “what can I change” you ask? Everything! But only if you stop keeping quite or just complaining to your mates while smoking. Only if we start standing up for your rights as we did on August 17-18.

Remember how all the bureaucrats and hangers on started running around. Remember how the moustachioed king was scared!

They scare us by saying if we don’t return to work we will be like in Ukraine. But during Maidan in 2015 there wasn’t a single strike. The result is in 2019 the average wage of a miner is 15,000 grivna ($600). Now miners have to strike because they don’t have enough to feed themselves — for five months they haven’t been paid. They kept quiet then, now they have to fight.

If you think that won’t happen here — a new law allowing for the late payment of wages has just been passed. Better to act now.

Or we will end up going to the end of the road with this regime — we will not have to wait long before we are joined up with the Russian Federation — the moustachioed one has no other way out.

… Join the struggle friends. Don’t let uncle sell our country! Nobody is saying we should stand up and kiss Tikhanovskaya, we don’t even know what she really wants. But if we stand together, peacefully then we will know what to do if this lady suddenly decides to do anything else than organise new, free and fair elections!

ISA asks all supporters to support the strike committee

1: By protesting to the General Director Mr Ivan Golovaty demanding that Belaruskali reinstate all sacked workers, bonuses and cease any discriminatory actions against any of its workers who protest against the authoritarian regime.

Copies of these protests can be sent to Cira Holm, Chief Ethics Compliance Officer at Yara International at Cira.Holm@yara.com or directly on the Yara International Ethics hotline at the end of page https://www.yara.com/this-is-yara/ethics-and-compliance/contact-us/

2: By protesting to the Belarusian embassy in your country to demand the immediate release of all those arrested, particularly members of the Belaruskali Strike Committee Anatoly Bakun, Yuri Korzun, Sergey Cherkasov, Sergey Taras and Pavel Puchenya. There contact details can be found on the site of the Belarus Foreign Ministry at https://mfa.gov.by/en/ministry/

3: By sending photos and messages of solidarity to the Strike Committee at stackombelaruskalij@gmail.com with copies to rodkille@gmail.com