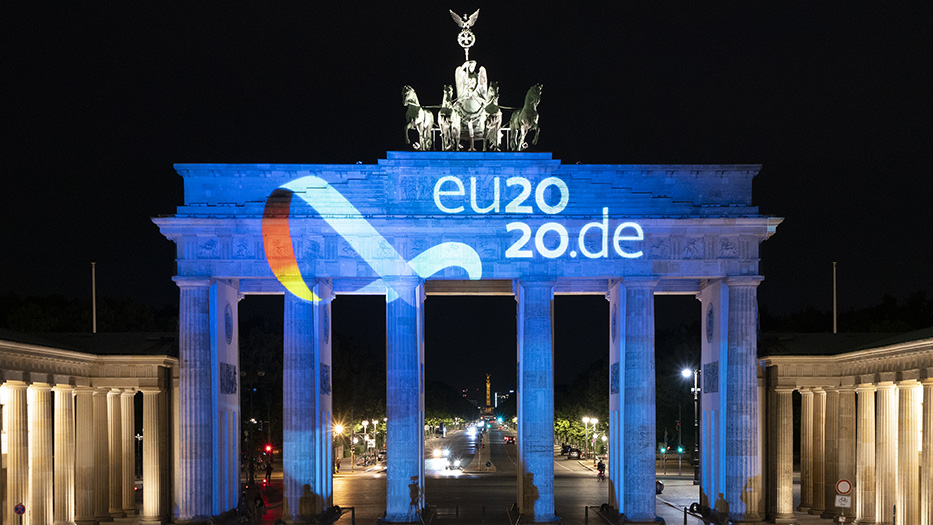 The Robber Baron takes over the running of the gang of thieves as it tears itself apart.

As the greatest crisis of global and European capitalism unfolds, it‘s the turn of the economic powerhouse to take over the presidency of the Council of the European Union. The German government will chair the meetings of the EU, its councils and committees, and represent the EU on an international level. A challenging task, given the extent of the looming crisis that will leave the Euro -crisis of 2010 in the shade.

The rotating council presidency is supposed to be neutral, but of course whoever holds the position is subject to pressure from various “special interests”. The capitalist classes and their lobbyists will always make sure they are heard. The giants of the German auto-industry or pharmaceutics will make sure that their tentacles reach into all political offices. Their think-tanks and media push their sugar-coated demands. “The need to ensure a level playing field in the steel sector” is how Süddeutsche Zeitung quotes the demand of a German federal state minister of economy, eager to protect “their” steel industry from foreign competition, irrespective of what damage it does to the climate.

In turn, those parts of industry that demand improvements in the infrastructure call for “a united strategy towards a digital future”. But here, increasing inter-imperialist tensions in the struggle for shrinking markets and especially the developing cold war between the US and China is taking its toll. Although the European Commission gave a cautious green light to the involvement of Huawei in January, demands for building the super-fast 5G network without the Chinese are growing louder and louder. The Federation of German Industry (BDI) wants to “bring the perspective of industrial competitiveness into the discussions on climate and customer protection” — in other words to talk more about profits and less about the needs of nature and people.

Even in March, the European Commission discussed the need for a “re-localization” of industry into Europe, reflecting the continuing trend of de-globalization, only to be met by calls of all kinds of capitalists to “reduce bureaucracy” by lowering taxes, wages and consumer protection standards.

The main fear of the most serious capitalists and their institutions though is over European stability. Their core demand is to maintain “European cohesion”. German capitalists in particular depend on the open borders, through which their goods flow into the vast European market. The combination of a developed low wage sector and high productivity has enabled them to overtake many of their European competitors to become one of the biggest export nations worldwide. Germany’s foreign trade surplus in 2019 was worth a whopping USD254 Billion — second only to China with $421 Billion.

More than half of Germany’s exports go to other members of the EU, which explains why the EU is so important for the country’s economy. But it also explains one of the main contradictions within the EU: One country’s trade surplus is another’s trade deficit, in other words wealth is being funneled from other EU members to Germany on a daily basis. Before Brexit, the UK had the highest trade deficit, possibly explaining why at least parts of the British capitalist class were fine with leaving the EU. It was followed by France, Greece and Portugal. The inequality of national industries within the tight framework of a common currency is a guarantee of potential conflict within the EU. That was before the current crisis of capitalism which, fueled by the pandemic, is turning into a truly existential crisis.

Economists predict that France will be hit harder by the crisis and will take longer to recover than Germany, resulting in a widening gap between the two countries. Economically, France might end up closer to Italy than to Germany, although Italy has been hit by the crisis like no other European country. Its industrial production has now declined for 17 consecutive months in a row, and by a massive 43% in April at the climax of the Covid lock-down, an economic catastrophe the EU’s third largest economy will not recuperate from very soon.

European governments, in their helpless attempt to drown the crisis in piles of money — €2.4 trillion are being mobilized on a European level — are preparing the ground for more contradictions. While tax revenues plummet, gigantic investment programs are being implemented. The great recession of 2008 and its consecutive euro crisis saw debt levels rise to historic heights, but these will be dwarfed by the new colossal debt mountains being built now. The average debt level of the Eurozone, at 84% of the GDP before the crisis, is forecast to rise to 112%. The Brussels-based think-tank “Bruegel” says that Italy, which had a debt rate of 134% before the crisis, might end up with a staggering 189%. This will completely humiliate the Maastricht stability pact, which limits the debt rate for members of the Eurozone to 60% of GDP.

The agreed European Recovery Fund is an attempt to revive the dead. For the first time in its history, the European union itself will be taking on debt. €500 billion will be distributed in grants to member states, €250 Billion will be passed on as loans. The biggest share of this, €209 billion, will go to Italy, to save its rotten banking system, that was in deep trouble even before the pandemic. At least that’s the plan, how it actually work out is another question. The best case scenario will be to buy some time.

Meanwhile though, the banking system in the belly of the beast itself, Germany, is causing concern. The bankruptcy of Wirecard has opened a scandalous, yet in no way surprising, network of corruption, reaching from the regulatory authorities all the way up to the finance minister, SPD big shot Olaf Scholz. But Wirecard will be a mere harbinger of a giant wave, which is looming on the horizon. The Titan of German banking, Deutsche Bank, is laying off 18.000 staff. Its stock value is only a third of what it was five years ago.

Even more important for the fabric of the German economy are the communal savings bank Sparkassen and the cooperative bank Volksbanken. They hold huge amounts of debts of the petty bourgeoisie, small shopkeepers, bars and restaurants, which have suffered most from the lockdown crisis. Right now, a huge wave of bankruptcies is building under the surface. Companies that can’t pay their expenses or repay loans anytime soon are exempted from declaring bankruptcy during the Covid-crisis. When this rule is lifted in September, these zombie companies could all default at once. The government’s solution is to artificially prolong their life by extending the rule until December. But they have no idea what to do, given that their system is in a structural crisis, to do with the banks that are not only being too big to fail, but also too big to save.

One study shows that 46% of the population is dissatisfied with the EU, saying it didn‘t live up to its responsibilities. Only 19% believe that the EU has been relevant during the pandemic. Interestingly though, a majority of 63% says the pandemic shows the need for greater European cooperation. Something that is impossible within the framework of capitalism and its inability to overcome the contradictions between the nation states. The diverging interests between the “frugal four” — Netherlands, Austrian, Denmark and Sweden — who tried to prevent the taking on of common European debts on the one hand, and crisis ridden countries such as Spain or Italy on the other hand, have shown the deep contradictions below the surface of European harmony.

The ruling of the German Constitutional Court against the European Central Bank’s bond purchasing program is a reflection of this. The Court heard several “financial experts”, i.e. lobbyists as witnesses, who made their case against the European quantitative easing program which, they argued, would result in inflation that would potentially decrease the value of German savings and the foreign loans granted by Germany’s banks and insurance companies. The Court ruled that the bond purchasing program partially violates the German constitution. By doing so, they questioned the superiority of the European Court of Justice, that is supposed to be above the national courts. Now the Federal Bank of Germany has accepted the explanation of the European Commission that the program is harmless, but this contradiction, which threatens the very existence of the EU is once again pushed under the already visibly bulging carpet.

Nothing can be said to be certain but death. But it is difficult to predict how long or in what form the European Union can survive. The tendency to get torn apart by its internal contradictions is balanced by the tendency of a band of robbers to stick together in a crisis, which they will do as long as the loot they can get is enough to share around. Germany, the Robber Baron, will try to keep the band together as long as possible, while looking at the balance sheet to ensure that the revenue is higher than the expenses. This is the maximum unity that Europe can achieve under capitalism. Or as Lenin put it: “From the standpoint of the economic conditions of imperialism, a United States of Europe, under capitalism, is either impossible or reactionary.”