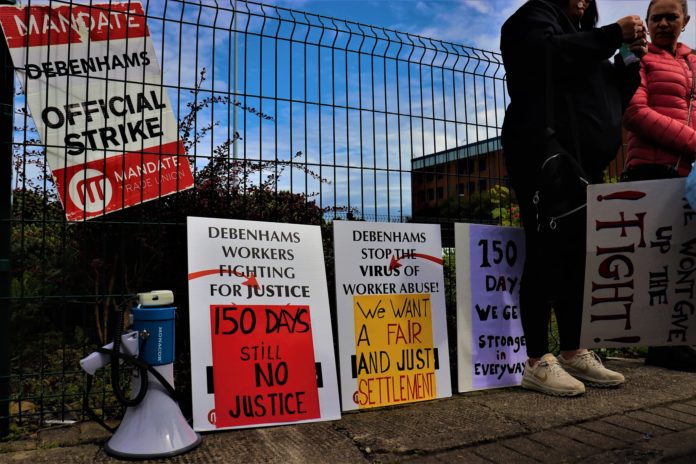 The lockdown enforced in Ireland in March by the onset of COVID-19 paved the way for a massacre of jobs, especially in the retail sector. The Irish subsidiary of Debenhams, a UK based retail chain, seized the opportunity to cut their losses and announced the closure of all 11 stores in the country with the loss of over 1,000 jobs.

The company bogusly claimed that they didn’t have the money to give laid off workers four weeks redundancy pay (severance in the U.S.), a guarantee won by their union MANDATE in 2016 during a previous round of job losses. The union leadership and company assumed that this would be accepted by the overwhelmingly female workforce, many with decades of service in the company. However, some of the shop stewards and many of the workers want to fight back.

One of the Debenhams workers in Cork, a city in the south of Ireland, contacted Socialist Party member of Parliament Mick Barry soon after the closure announcement. Similarly one of the Dublin based workers contacted Socialist Party member and former member of parliament Ruth Coppinger. We quickly facilitated a Zoom conference call of 70 workers spanning most of the stores. These meetings became regular during the severest period of lockdown and grew to over 100 workers spanning all the stores.

These meetings discussed the politics and economics of the closure, and were used to develop demands and a plan for struggle. We discussed the need for state intervention to save the jobs through public ownership, and to demand Debenhams cough up the resources for redundancy pay from their stocks and the profits hidden by their UK parent company.

Socialist Party members worked with Debenhams workers in these meetings to also organize socially distanced protests at the stores and the Bank of Ireland, which is a shareholder of the parent company and is itself part owned by the government. Once the lockdown restrictions eased, the workers took the initiative to mount strong pickets that have rebuffed attempts by the court appointed liquidator to sell the company’s stock to pay off businesses and state taxes instead of paying workers their agreed upon redundancy payments.

These blockades as well as recent occupations of two of the stores have been in defiance of Ireland’s restrictive labor laws, but have been absolutely necessary to sustain the struggle for five months and counting, giving the best chance of victory.