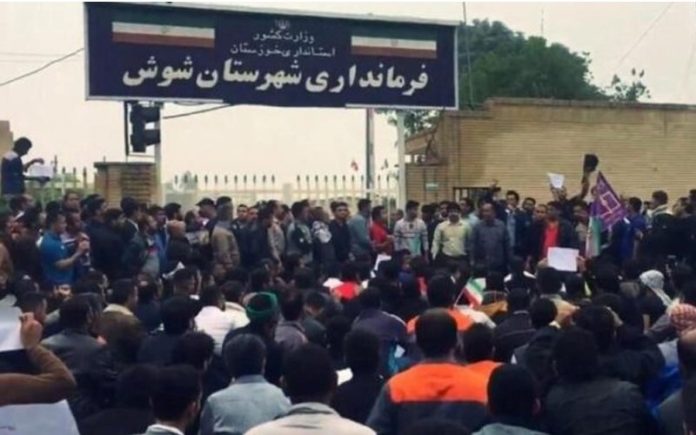 Since the beginning of August there have been major strikes in more than 50 companies throughout the country, especially in the oil-rich South affecting the oil, gas and petrochemical industries, which are all core sectors of the Iranian economy.

Following the outbreak of COVID-19 in Iran, it seemed for a period that the development of protests slowed down, but the reality is that after the brutal crackdown, the wave of protests reemerged in 2019. The struggle has shifted from confrontations on the streets into the workplaces, which is an important new step for the development of a new independent worker’s movement in Iran.

Since the beginning of August there have been major strikes in more than 50 companies throughout the country, especially in the oil-rich South affecting the oil, gas and petrochemical industries, which are all core sectors of the Iranian economy.

The background to these new strike movements is that the living conditions of the working class are becoming more and more precarious and unbearable. With the new crisis, in many companies wages are often simply not paid for months. There is a shocking number of companies in which the average wage level amounts to only one third of the official poverty line. Last week, four workers died after a mining accident in the province of Kerman. The workers had not been provided with the necessary protective equipment. This type of accident occurs frequently in the country.

One of the triggers for the strike wave in the industrial sector was the death of a contract worker in early August in a petrochemical factory due to a heart attack, which provoked protests against working conditions in the whole sector. Working conditions are often catastrophic and very unsafe, the majority of employees in many industries are employed on temporary contracts. The struggle included workers who are working on industrial projects in one of the largest natural gas fields in the world, in which multinational companies are also involved.

These struggles often show very strong determination. At a refinery in Isfahan columns of security forces blocked the gates to prevent the striking workers from going out to protest, but they were literally overrun by the workers. The emergence of the industrial working class onto the stage of struggle will be striking in the next months and years and will deepen the crisis in which the regime finds itself, especially because the dominant economic demands are often directly linked to political demands, as employers are often directly linked to the regime by the Islamic Revolutionary Guards Corps (IRGC).

In addition, in recent weeks and months, there have been miners’ strikes, pensioners’ protests, strikes by railroad workers, bus drivers, teachers and many others, all prepared to risk imprisonment and torture.

The strike of the Haft Tappeh workers, which has lasted since mid-June is an example for workers across the country who want to step into action. It is the longest strike in the history of their struggle. Their demands still include the immediate payment of unpaid wages, the dismissal of the corrupt owner and the nationalization of the company. They also demand the reinstatement of dismissed workers and the extension of their health insurance. Only some of the workers of Haft Tapeh have received a monthly wage this year. Claims by the corrupt employer and the authorities that they did not know about the demands of the Haft Tappeh workers forced them to continue their strike in the form of daily demonstrations. The situation of the Haft Tapeh workers is representative of the permanently deteriorating situation of millions of Iranian workers.

Haft Tappeh workers have been constantly intimidated by the administration and judicial system, some of the strikers and leading trade unionists have been arrested again and again. At the same time the regime, driven by fear, recently tried to appease the workers by sending a parliamentary delegation to the factory and invited the independent union to a meeting with a parliamentary commission. During its visit to Haft Tappeh the delegation was confronted with a speech by a trade unionist who attacked the regime directly for this and for the imprisonment of strikers.

If the workers take the next step and, as announced, occupy the factory once again, this would mean a new stage of escalation and lead to a harsh confrontation with the regime. It would also mean the need for massive solidarity across workers in Iran and internationally.

In this desperate situation, the regime sought salvation in an agreement with China. As part of a “strategic partnership” agreement, China was to invest 400 billion dollar in Iran over the next 25 years and gain “privileged access” to the Iranian market. In return, the agreement provided for China to receive spot cheap oil supplies from Iran. Military cooperation between the two countries was also to be deepened. But there is massive resistance to this, even within the factions of the Iranian bourgeoisie, which shows the deepened divisions within the ruling class.

Also recently, online protests against executions, repression and torture have increased. The jailed protesters from the 2019/2020 protests are still in dangerous conditions and facing possible execution. As repression increases, anger does too. The chairman of the Free Union of Iranian Workers, Jafar Azimzadeh, is one of the workers persecuted and arrested, like other trade unionists. After he went on hunger strike in mid-August, striking workers increased protests and pressure for his release.

The recent strikes and protests have been more coordinated than before. A joint Statement from mid-August by 50 Independent Workers Organizations, Teachers’ Associations, Students’ Associations & Publications & Retirees’ associations in support of strikes & protests by workers at Haft Tappeh, Hepco and the oil, gas & petrochemical industries says:

“We, the signatories of this statement, declare that in the current economic crisis of this land, it is very natural and expected that more and more workers and oppressed groups will join these strikes; the crisis causing all people to lose their patience are emanated by privatizations, de-regulation of prices, workers declining living conditions, pushing them to verges of death (and not just poverty), non-payment of even poverty wage, etc. It is clear that in order for these strikes to grow and achieve their demands in these critical circumstances, the striking workers must be able to organize and unite themselves more than anything else, and pursue the serious and high risk matter of forming autonomous organizations based on the will and ability of the workers.”

But it is clear that most workplaces don’t have the militant strength of the Haft Tappeh workers and their supporting community in the city. That’s why the creation and coordination of strike committees throughout the country is needed. This could also be the first step for the creation of a new independent revolutionary working class party. The key task in the next period will be to organize more strikes and a general strike in order to struggle for and win basic worker’s rights, the nationalization of the industry and the whole economy under workers’ control and also to build a powerful movement in order to overthrow the regime.