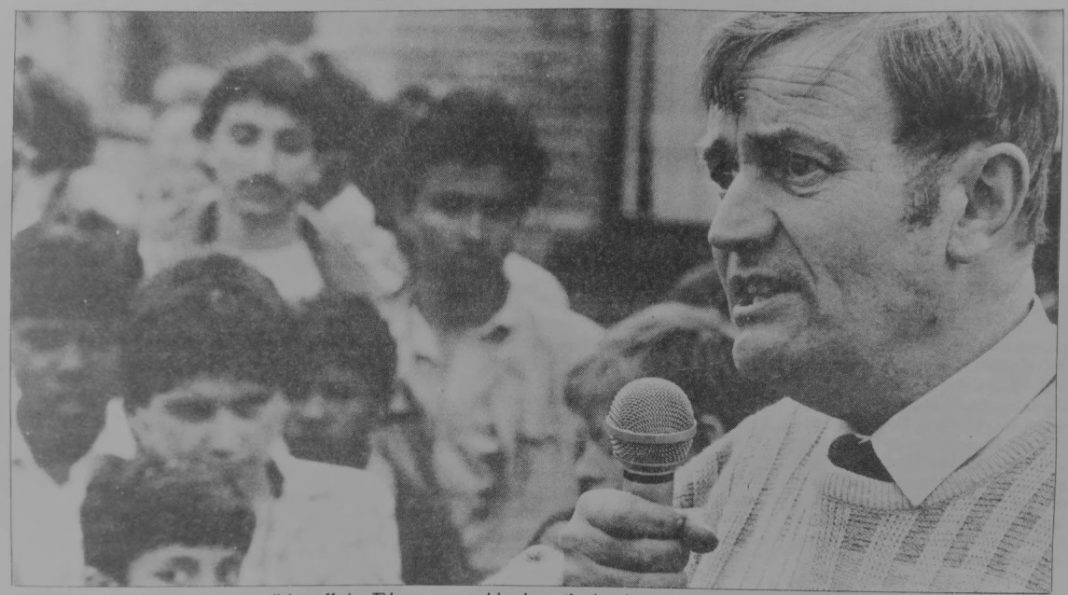 30 years ago, one of the three Militant (then the name of the British section of the CWI, the predecessor of ISA) supporting Labour MP’s in Britain, Pat Wall tragically succumbed to ill health and passed away having only just been recently selected by his Labour Party to represent them for a second term.

Pat was Labour MP for Bradford North from 1987 until his death in 1990 but his life had spanned decades of struggle and commitment to the cause of socialism.

He was born into an ordinary Liverpool industrial working class family on May 6, 1933. He entered political activity at the age of just 16, met during an election campaign by local activist Bill Thompson, early in 1950. Won almost immediately to Marxism and Trotskyism by what was to become known as the Deane-Grant group, he was Garston Constituency Party Secretary in Liverpool within the year. He remained a committed and active Trotskyist until his death.

Liverpool was later to become a stronghold for the Militant and ultimately led to the huge achievement of Liverpool City Council in the 80’s. However, none of that would have been possible were it not for the hard work put in by the early pioneers. Liverpool Labour Party was dominated by the right wing which in turn was a minority grouping on the Council. As a dynamic young activist Pat played a significant role in the breaking of the hold of the right wing on the Liverpool Labour Party in the late 1950s. He was elected as a Liverpool city councillor in the early 1960s.

“Pat, however, was much more than an effective and authoritative activist. He attached the highest importance to Marxist theory as a guide to understanding and action. He was associated with a series of journals aimed at leading and widening the influence of Trotskyism, and popularizing without compromising or diluting it. Latterly this was manifest in the leading roles he played in establishing and launching the Militant newspaper and before that the Socialist Fight of 1958–63. His role in the production of the Marxist youth journal Rally, organ of the Walton Labour Youth League in the 1950s deserves special mention. This journal, behind which he was one of the leading figures, gained a national and even international circulation despite its humble origins and duplicated production”.

—Extract from obituary by Ian Hunter in marxist.org

Pat worked for the mail order company, Gratton’s, which ultimately led to him moving away from Liverpool, first to Lincolnshire and then to settle in Bingley near Bradford. Pat very quickly emerged as a force to be reckoned with in both the Labour Party and the local Trades Council. He was elected to serve for Labour on Bingley Council, but he gained huge prominence as the President of Bradford Trades Council. In that position, he was able to organize and mobilize the hugely important initiatives to counter racism and the National Front which was attempting to whip up racist thugs against the local minority ethnic communities from both India and Pakistan.

The first ever national demonstration against racism was held in Bradford in 1974 initiated by the Trades Council and the Labour Party Young Socialists which even received the backing of the Labour Party! The first real multi cultural show of strength in the city saw thousands marching together from all backgrounds which helped to unite and steel the local Trade Union Movement. The Indian Workers Association played a vital role in mobilizing the local Asian community. The night before the demo, the NF had attacked and burnt the Trades Council banner but undeterred, what was left of the banner took pride of place in the forefront with Pat marching proudly underneath it. The threat from the far right was real and a lot of that decade was spent uniting and mobilizing the local community against racism with Pat playing a key role.

Pat also played a leading role in pushing the local and national Labour Party to the left and was instrumental in successfully moving the motion which was passed at Labour Party Conference in 1972 calling for the nationalization of the commanding heights of the economy.

Pat continued to play an active part in the Labour Party until he was selected to fight for Labour in the General Election of 1983 in Bradford North. This was despite a vile and coordinated attack on Pat in 1982 by the Sunday Times which accused him of trying to foment civil war and for attacking the monarchy. These comments were of course taken out of context and twisted to suit their ends. Lurid headlines swirled around national and local media; journalists camped outside his house and letters were sent to his employer demanding he be sacked. This set the tone for the 1983 general election.

This was a hard fought and bitter campaign. Pat had huge local support but there were two factors that played against him resulting in his defeat. In a spiteful and treacherous move, the former Labour MP, Ben Ford, decided to stand against him as an independent even though he had lost the selection contest fairly. Second, Michael Foot, the then Labour leader addressed a mass national election rally in St Georges Hall, Bradford, where he singled out Pat for attack days before the election repeating the nonsense from the Sunday Times. The newly formed Social Democratic Party, a right wing split off from Labour also stood a candidate and poured resources into Bradford to unseat the local Marxist. Facing almost daily attacks on him in the local press, Pat maintained a dignified and hard hitting campaign, narrowly losing out by 1500 votes to the Tory.

Four years later in 1987, Pat bucked the national trend and won a huge victory for Labour with a 12% increase in his vote, despite Labour polling badly on a national basis. The same could be said for his fellow MP comrades, Dave Nellist and Terry Fields who both increased the Labour vote in Coventry and Liverpool. Pat’s campaign left no stone unturned including a mass demonstration in his support the week before the election. The night of the election was electric as his victory was announced at the big post election party. Hundreds of us marched down to the official count to hear the result and the roar from the packed gallery could be heard throughout the city. There were no dry eyes in the room after Pat’s acceptance speech and the count was then abandoned by all the other candidates as we all belted out the International which later made regional headline news.

The attacks on Pat did not end there. Labour drew all the wrong conclusions from their defeat and blamed a manifesto which, they said, was too “left wing”. Kinnock stepped up the witch-hunt against Militant. Pat’s local Labour Party was closed down and the media demanded he have the Labour whip withdrawn from him. Such was Pat’s standing locally, his popularity increased. There was huge support for his principled stand to take no more than the average wage as an MP, donating the rest of his Parliamentary salary to the socialist movement.

Pat should always be remembered for his gentle but firm manner; his ability to take the most difficult of topics and explain it in simple terms which always left audiences in awe; and his firm grasp of Marxist theory. Pat devoted a lifetime to building the workers movement, often in the face of very difficult circumstances, and to popularizing the ideas of Marxism. A class fighter to be proud of and we celebrate his life on this anniversary by recommitting ourselves to the ideas he stood for.