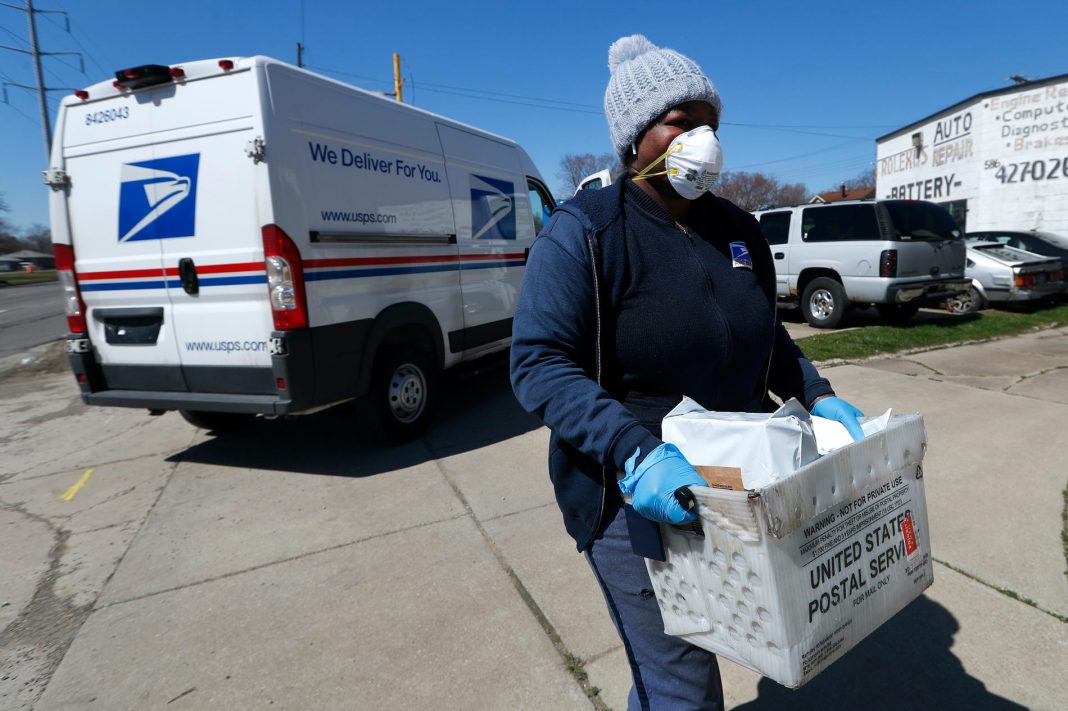 Tyler Vasseur is a letter carrier at the United States Postal Service in Minneapolis and a member of the National Association of Letter Carriers Branch 9. This article was written in a personal capacity.

The crisis at the United States Postal Service (USPS) has been making headlines for weeks as Trump’s new Postmaster General Louis Dejoy has attempted to push forward with major and disruptive changes to the service. This has brought to life the crisis that has faced the USPS for years due to a decade of bi-partisan efforts to strangle the service.

Dejoy has kicked a hornet’s nest, and aroused a significant section of the U.S. to publicly support USPS, with TV shows like Last Week Tonight with John Oliver holding important and informative segments on the history of the crisis, and people across the country tweeting support with #SaveTheUSPS. With the potential for massive voter suppression on the horizon through the disruption of mail-in voting, further attacks on USPS would be devastating for working class people across the country. It’s clear that it will take a fight to fully push back these attacks. There is a massive opportunity right now for postal workers to get organized and link up with the communities they serve to fight cuts to service and attempts to privatize the post office.

In 2006, Congress passed the Postal Accountability and Enhancement Act (PAEA) with bipartisan support and cosponsorship from Republican and Democratic lawmakers. The legislation included the “Pre-Funding Mandate”, which forced USPS to fully fund retirement healthcare benefits up to 75 years into the future. No other public or private entity faces this requirement. In 2006 USPS was reporting a net income of $900 million, and due to the PAEA, were reporting a loss of $3.8 billion just three years later in 2009. The law accounts for 74% of the losses in revenue over the last 13 years.

While the 2008-9 recession, movement towards online communication, and COVID-19 pandemic all hit the postal service hard financially, the PAEA was the real death blow. By starving USPS of funds and sending the agency almost immediately into debt, the political establishment can then turn around and use poor services as a justification for privatization.

Louis Dejoy, a major donor to Donald Trump and the GOP, was appointed by the Postal Board of Governors (a majority of whom are themselves Trump appointees) as Postmaster General this May. Before his appointment, Dejoy was the CEO of a logistics company. He had to divest stocks in UPS and Amazon upon accepting his nomination, and he still owns major equity in a private logistics contractor. With these deep connections to the private sector, it is clear that there are major conflicts of interest with his role as head of the public postal service.

In July, Dejoy implemented several alarming changes at USPS, including an end to overtime, the shuttering of mail processing equipment, shorter retail hours at post offices, and the removal of some USPS streetside mail drop boxes. It is clear that Dejoy was appointed for a reason, to intentionally disrupt service on the eve of the 2020 Presidential Elections, and further discredit USPS to justify privatization.

Postal workers across the country were forced to work unpaid overtime, skip breaks, and cut corners on safety procedures in order to heroically ensure the delivery of their mail routes. These new pressures on postal workers came amidst the COVID-19 pandemic, where around ten thousand of us have been forced to self-quarantine, thousands have tested positive for the virus, and over seventy have died from the virus. Dejoy’s sweeping changes to an understaffed agency caused immediate delays in mail delivery.

Following public outcry, Dejoy was forced to testify before Congress about the proposed changes. Because of that and the announcement that at least 20 states were suing over delay of mail and possible election interference, Dejoy announced on August 18 that he would be rolling back any proposed changes until at least after the election. While a victory for now, USPS remains under threat, and the collapse of the beloved federal agency would be devastating.

The 2020 presidential election will likely have the highest percentage of mail-in voting of any national election in history due to the threat of voting in-person during the COVID-19 pandemic. Trump has openly stated his opposition to increased funding for USPS so as to prevent universal mail-in voting, the consequences of which could lead to massive voter suppression come November. He has used the service disruptions to harp on the inefficiency and unreliability of USPS, boldly claiming that “the only way we’re going to lose this election is if the election is rigged.” The 2020 presidential election is set to be one of if not the least credible in U.S. history.

In addition to the very real threat of voter suppression if immediate action isn’t taken to fund USPS, the loss of the agency would be devastating in rural and hard to reach areas that other companies don’t deliver to because they are simply not as profitable. Just one example of the crucial services that would be lost is with medication delivery, where in 2019 USPS delivered 1.2 billion prescriptions, including almost 100% of prescriptions from the Veterans Administration.

Going forward the Trump-backed Dejoy will likely be careful to move too openly with major disruptive changes to the postal service before the election. But it is clear that he will look for any way to delay and disrupt service as a way of undermining the credibility of the postal service, which could make the case for privatization easier in the future.

Who Will Save USPS?

The Democratic Party’s newfound enthusiasm for the post office is more related to beating Trump than having a functioning national postal service. We can just look at their track record of privatizations and cuts to public services across the country, as well as the party’s support for the PAEA in 2006. In February the Democratic-controlled House of Representatives passed the USPS Fairness Act to repeal the Pre-Funding Mandate, but the bill has since died in the Senate. Just recently the House of Representatives passed $25 billion in emergency funding for USPS, but with mixed messaging from Trump about signing a bill to fund USPS before the election it is unlikely the Republican-controlled Senate will pass the bill without increased pressure from below. This is in the face of massive support for funding USPS, with a recent poll showing 88 percent of Democratic voters, 75 percent of Independents, and 70 percent of Republicans in support.

The strategy being put forward by the Democrats is “vote for us and we’ll pass something after the election.” But we can’t sit back and wait until November or have any trust that a Biden Administration alone will solve the deep crisis facing USPS. The Obama-Biden administration not only did nothing to protect the postal service from privatization, they also orchestrated a massive bailout for big business following the 2008-9 recession. Saving our public services will require the self organization of the working class outside the trap of the Democratic Party.

We need to get more deeply organized now to fight back against privatization attempts and to get full funding for the postal service. Nurses organizing for Medicare for All, and teachers pushing back attempts to privatize public education in recent years have shown the way forward for the rest of the labor movement of what it means to build an organized fight back.

The Role of our Unions

There is a dizzying amount of information that is changing daily, about what is happening to the post office with regards to the election, and the disruptive changes to service that were implemented (and temporarily removed) by the new Postmaster General Dejoy. Our unions should start now in our workplaces to educate union members about what’s going on, and by organizing rallies to educate the broader public and build support for the postal service.

Because of Trump’s blatant attacks, postal workers and our unions have a major opportunity to link the broader fight to save the public postal service to the mass desire to defeat Trump in the election this November. But this won’t happen automatically, it will take effort and resources.

Our unions can start by launching a #SaveTheUSPS campaign, and link up with other public sector unions who are facing budget cuts like teachers and transit workers. A campaign like this could include organizing community meetings across the country to build for mass days of action that can bring together postal workers, other public sector union members, and the communities we serve everyday. The union should also use a campaign like this to activate its members and encourage robust rank and file participation in the union. Our unions should also be organizing our workplaces to push back attempts to undermine the postal service. Letter carriers, led by their union steward, organized against the speed ups and disruption to mail service in Milwaukee. There are also examples of workers in Washington state and Texas, who have reinstalled shuttered mail processing equipment in their plants. This is in direct defiance of Dejoy, who even though he walked back his disruptive changes until at least after the election, has ordered plant managers not to reinstall equipment that was already shut down. These are inspiring examples of ways postal workers can effectively fight back. National union leadership should be actively encouraging this, and should organize a coordinated campaign of postal workers across the country against further attacks.

In 1970, postal workers were in a similar situation to the one we’re in now. At that time USPS was the Post Office Department and funding for it, as well as workers wages and benefits, were tied directly to Congress. After having endured years of miserable wages and working conditions, without action from Congress, postal workers went out on strike. It became known as the “Great Postal Strike of 1970”, the largest “wildcat strike” (meaning not officially sanctioned by union leadership) in U.S. history, and after only eight days won huge gains in wage and benefits for postal workers. In the history of labor struggles when the bosses attempt to cut wages, implement a speed-up, or make dramatic changes that negatively impact health and safety in the workplace, the strike has been the strongest weapon organized workers have used to fight back. A strike is never something for workers to take lightly, and it is almost always done because they are left with no choice. In building a fighting campaign to #SaveTheUSPS, the union should reserve the strike weapon as an option to deploy if cuts and privatization attempts are not reversed.