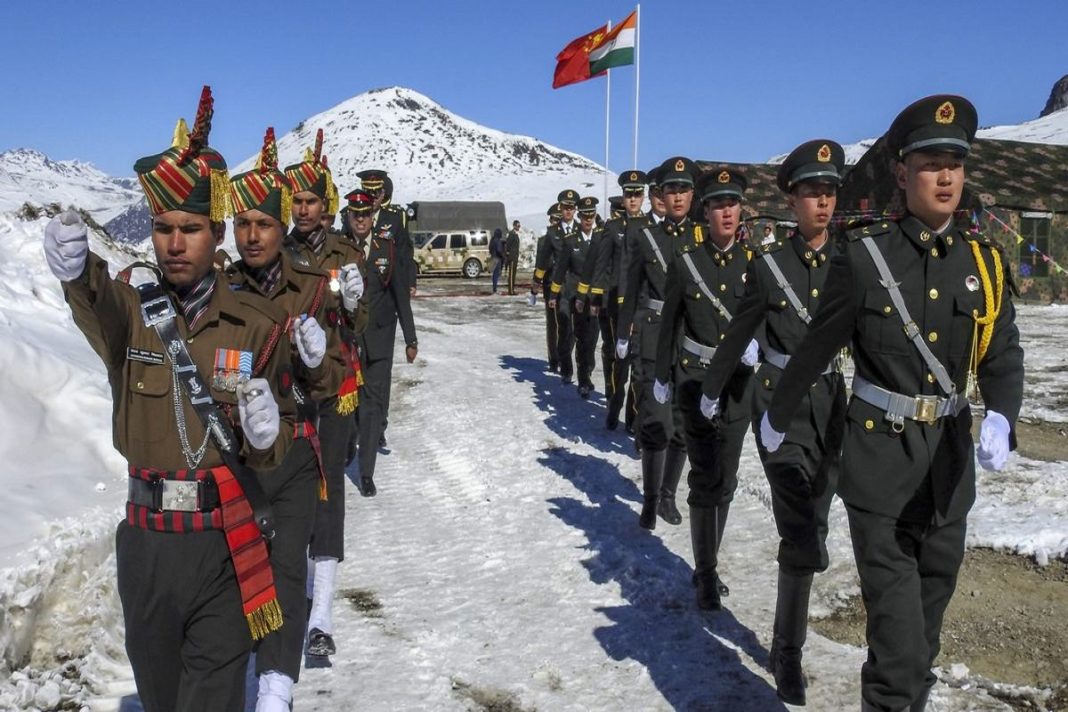 The military conflict in the Himalayan region of Ladakh, on the border between China and India has again escalated as the two countries fight for markets.

On June 15, 20 Indian soldiers and possibly a similar number of Chinese soldiers died on the contested border between China and India in the Himalayan region of Ladakh, part of Kashmir. These are the first lethal conflicts since 1975, and the most serious since 1967 on the 3,448 km long border, which has been disputed since 1962 when it was at the centre of a war between the two sides.

As troops are banned from carrying guns due to an earlier treaty, the soldiers died during fights conducted using fists, sticks with barbed wire and nails and in other direct confrontations as well as from the freezing temperatures.

This has taken place against the background of increased tensions between the countries, both of which have a population of close to 1.4 billion. Both are nuclear powers, whose governments are struggling with the coronavirus and the looming economic crisis, while trying to increase their economic and geopolitical influence in the region.

The dispute has been looming as both sides have been implementing infrastructural projects such as building modern roads and bridges, and in China’s case relocating the river Galwan. The de-facto border, known as the “Line of Actual Control” (LAC) is disputed by both ruling classes, and these new projects have led both regimes to suspect the other of changing the “facts on the ground” to strengthen their respective claims over the disputed land. It is clear that the new infrastructure is intended for military purposes, rather than to improve the living conditions of the local people in this remote and sparsely populated region. The population of Ladakh is 280,000 people in an area almost as large as Sri Lanka. Claims by either side that they are acting to defend the integrity of oppressed or smaller nations in the region like Bhutan, Kashmir or Tibet cannot be taken seriously given their record of the suppression of the rights of national minorities and denial of the right of self-determination.

It is the deepening economic and geopolitical tensions that are at the root of the latest military conflict.

As the world economy is heading into its deepest crisis for over 100 years, the fight over resources and markets is heating up. India and China are both trying to increase their influence in the region. For China, India is currently only its 19th largest trading partner, but it wants to open the Indian markets to Chinese companies. The Chinese car companies SAIC and Great Wall want to invest in the huge Indian market, something the Indian giant Tata is not keen to see. Chinese Smartphone companies like Xiaomi and Oppo are pushing into the quickly growing Indian market, where the Indian giant Micromax is already playing a leading role. Other Chinese companies like Alibaba, Bytedance and Huawei are heavily interested in the billion strong market.

The Indian government on the other side is trying to protect the market especially from Chinese Foreign Direct Investment and technology. It is no coincidence that the tensions increased when, earlier this year, the Chinese central bank bought 17.5 million shares in India’s biggest private bank HDFC. In April, India introduced new regulations demanding special permission directly from New Delhi for substantial investments into Indian companies by Chinese firms. Similar protectionist measures are being imposed elsewhere, from Japan to the EU, as inter-imperialist rivalries intensify and governments shift to more nationalistic economic policies. Many of these new protectionist measures are directed against China, which in turn is why Beijing feels pressure to show firmness in the current border conflict.

The other side of this process that has fuelled the tensions are the attempts by the Indian ruling class to attract US manufacturing companies away from China as part of their de-coupling strategy. This is also reflected in the fact that it is not just Modi’s Bharatiya Janata Party (BJP), but also the opposition Congress party that has taken a “tough” line against China, showing that this growing escalation has a strategic bearing for the Indian ruling class, but also that the Congress has no alternative to offer to Modi’s nationalist approach to this question. So the whole conflict not only reflects the interests of the respective ruling classes in China and India, but is also part of the larger conflict between China and the USA.

The Indian government has been using nationalist, Hindu-chauvinism and communalism since it came to power. Earlier this year we saw the attempt to introduce the discriminatory citizenship law which led to mass protests against the law but also communalist attacks against Muslims and other minorities, which left over 50 dead. The recent clashes with China were used by the Modi government to whip up anti-Chinese tensions including calls for a boycott issued by the Confederation of all-Indian Traders (CAIT).

Modi’s mishandling of the corona crisis from a health and social point of view as well as the attempts of the BJP to attack the labor law are meeting growing criticism. Back in January, India was shaken by a 250-million strong general strike, so Modi knows he needs to whip up nationalism and communalism to divert attention from the more deep-rooted problems.

It is also true, however, that Indian companies also need the Chinese market for exports, so Modi can’t push the conflict too far. Not only is the danger of a serious conflict between two nuclear powers an unthinkable option, but even a more limited border war would carry huge political costs for Modi if the Indian side was to be defeated. In the 1962 war, when both side’s armies were much less well armed and sophisticated, China inflicted a humiliating defeat on the Indian forces.

Similarly, for China there could be big risks with even a “local” war. Xi Jinping is upset about the increasingly close “friendship” between Modi and Trump. Modi is supporting Trump’s call for an “investigation” into China’s role relating to Corona and for Trump, India is central in his Indo-Pacific strategy as a counterweight to China. Xi Jinping, just like Modi and Trump, has an interest in a “little bit of conflict”, as long as it is kept under control. His reign is far from set in stone given the piling up of economic problems, not to forget about the movement in Hong Kong, the desperate situation of tens of millions of migrant workers in China, the hunger for democratic and trade union rights and the devastating ecological situation in many regions. These problems have reopened the fierce factional power struggle within the Chinese state and ruling elite. So, no! Xi Jinping is not acting from a position of strength.

The recent conflict is a warning shot especially from China not to cross more lines. Both sides use the conflict in their own interests, but neither wants a full-blown conflict. Earlier clashes were followed by a supposed “de-escalation”, but then led to the recent lethal conflict. Now there are talks again, while more troops and military equipment are poured into the disputed areas. While neither side wants this, playing with fire can run out of control, a danger that both sides are well aware off.

The movie “Wag the dog” from 1997 depicts a politician who creates a war to divert attention from a scandal. Although the situation is not that simple, all three of them, Modi, Trump and Xi Jinping, have an interest in such an approach. The bigger picture is, of course, the capitalist crisis and the war for markets. The price for this has to be paid by the working class in China, India and the whole region. The same working class that is the only force able to stop the warmongering as well as end the capitalist crisis. The ruling classes are trying to use the old “divide and rule” method as they are terrified that the working class in both countries is not only huge, but moving into action. In response, it is the working class that now needs to organise, to fight back and to unite to win.