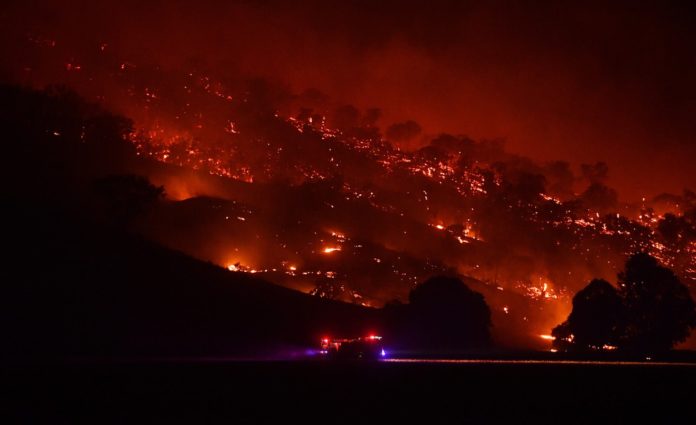 In April, as countries across the world shut down and millions sheltered in place during the COVID-19 pandemic, daily fossil fuel emissions plummeted to 17% lower than the previous year. Just two months later, emissions are on track to resume at pre-pandemic levels.

The COVID-19 pandemic is a sampling of what is to come in a time of unbounded environmental degradation. Public health crises of this scale, combined with mass displacement of people from areas that are susceptible to extreme weather events, will become the norm.

We need a dramatic and rapid transition away from fossil fuels. The reopening of the economy presents an opportunity to lay the basis for this transformation by putting millions of unemployed workers back to work, rebuilding our crumbling infrastructure on a green basis. Instead, big business and corporate politicians have put their full weight behind reopening economies before it is safe for workers, and with no regard for their environmental impact. As long as profit is the bottom line, the type of fundamental changes that will be necessary to avoid a full environmental and public health meltdown cannot happen.

The Australian mega-fires that kicked off 2020 were a massive warning of the dangers of increasing global temperatures. Permafrost is melting faster than predicted, threatening to release huge quantities of carbon dioxide and methane, an even more dangerous gas, into the atmosphere. One hundred fifty million people live in areas that will be below the high tide line by 2050, and many more live in coastal areas that will be decimated by increasingly frequent and severe hurricanes.

Deadly viruses like COVID-19 often appear in areas where humans are dramatically changing ecosystems through expansion of agriculture, manufacturing, etc. While many species are displaced from this development, bats are highly adaptable and often remain. They are the original hosts of six major epidemics in the last 26 years. Scientists think the COVID-19 virus spread from a bat to another animal in the wild that was then brought to a wet market in Wuhan, China. Animals are kept in packed cages and with their immune systems weakened from the stress, viruses can easily spread between species, including humans. Animal agriculture practices globally pose serious threats to public health, and are the leading cause of deforestation, ocean contamination, and soil erosion.

If lockdowns had been implemented weeks earlier in the U.S., tens of thousands of people would not have died. Scientists have been warning about the likelihood of a pandemic for years. While the criminal incompetence of Trump played a critical role, the dramatically under-resourced disaster response agencies and a for-profit health care system made Americans particularly susceptible to COVID-19.

How did we get here?

The global ruling class have made trillions of dollars from the extraction of fossil fuels, development of luxury properties, construction of military equipment, and mass production of unnecessary goods from unsustainable materials. They exert enormous control over political systems everywhere. Politicians and lawmakers cater to their needs by slashing environmental regulations, providing completely toothless oversight, and attacking workers’ rights in order to prevent organizing against hazardous work and environmental degradation.

This profit-driven approach is apparent in the chronic and criminal mismanagement of critical utility infrastructure. The owners of the Sanford and Edenville dams that breached in central Michigan in May, leading to the evacuation of tens of thousands, had been cited by federal regulators for safety issues since 2004. The 2019 California wildfires that destroyed 14,000 homes and killed 85 people started when a live wire broke free of a tower that was a quarter century past what PG&E, the state’s largest utility company, considered its “useful life.”

Our Infrastructure is Crumbling: We Need a Green New Deal

Over the course of the COVID-19 pandemic, the U.S. government has spent a whopping $2.2 trillion in three stimulus bills. $500 billion was granted in loans to major industries, $58 billion of which was in grants and loans to the airline industry, and tens of billions to the Department of Defense and Homeland Security. The U.S. military produces more greenhouse gas emissions than 140 countries combined.

The problem is not a lack of resources. It’s who is in charge of them.

It is democratic socialists like Alexandria Ocasio-Cortez and Bernie Sanders alongside a powerful movement of young people who have helped to popularize the idea of a Green New Deal in the U.S. We urgently need to fight for this massive program that would create millions of union jobs that would directly address historic levels of unemployment and tackle climate change.

Jobs could be created to fix and retrofit green infrastructure, including a massive expansion of public transit and high quality, public, affordable housing; rapidly develop renewable energy sources; rewild and reforest ecosystems; develop and expand urban green space; massively invest in and scale up organic farming; and build infrastructure to mitigate the worst effects of natural disasters. We also need to massively increase jobs in health care and first response (such as wildfire containment teams).

This is where trillions of stimulus dollars should go, not to bailing out corporations that got us here in the first place.

The fight for these fundamental changes will be met with tremendous opposition from powerful corporate interests and the political establishment. While some gains can be made under the pressure of a mass movement, they will not happen quickly enough given the short timeline we have to dramatically cut emissions and prevent irreversible climate change.

The economy needs to be run in the interests of the vast majority of people. To achieve this, we need democratic public ownership of the major polluters, including fossil fuel, utility, and major agricultural companies under the control of a workers government. Democratically elected councils of workers and consumers would make decisions about how industries are run on the basis of what is needed, efficient, and sustainable. These councils could rapidly, and immediately begin transitioning polluting industries towards 100% renewable energy and environmentally sustainable practices.

Because of the global nature of the capitalist economy and the climate crisis itself, we would eventually need international, socialist, democratic planning to achieve a fully environmentally sustainable future.

We can draw important lessons from the #JusticeforGeorgeFloyd movement on how to fight for real change. It is a grassroots, multiracial movement taking to the streets that has forced convictions of killer cops and reductions in police budgets. Democrats and Republicans alike have ruled over police brutality and an impending climate catastrophe for decades and have done little to nothing given the scale of these crises. We need to move beyond these thoroughly corporate parties and build our own political voice for working people. We need an independent left political party representing the interests of the multiracial working class and youth to take on and take over polluting industries.

We cannot afford to wait. The political establishment will see to it that we pay for the triple crises of the pandemic, economic depression, and climate meltdown even with our lives. The system of capitalism is sick, and the global working class is getting sicker. COVID-19 is a warning sign of the massive public health crisis, inextricably linked with environmental degradation, that is to come. But a healthier, safer, more equitable world is possible: if we’re willing to fight for it.