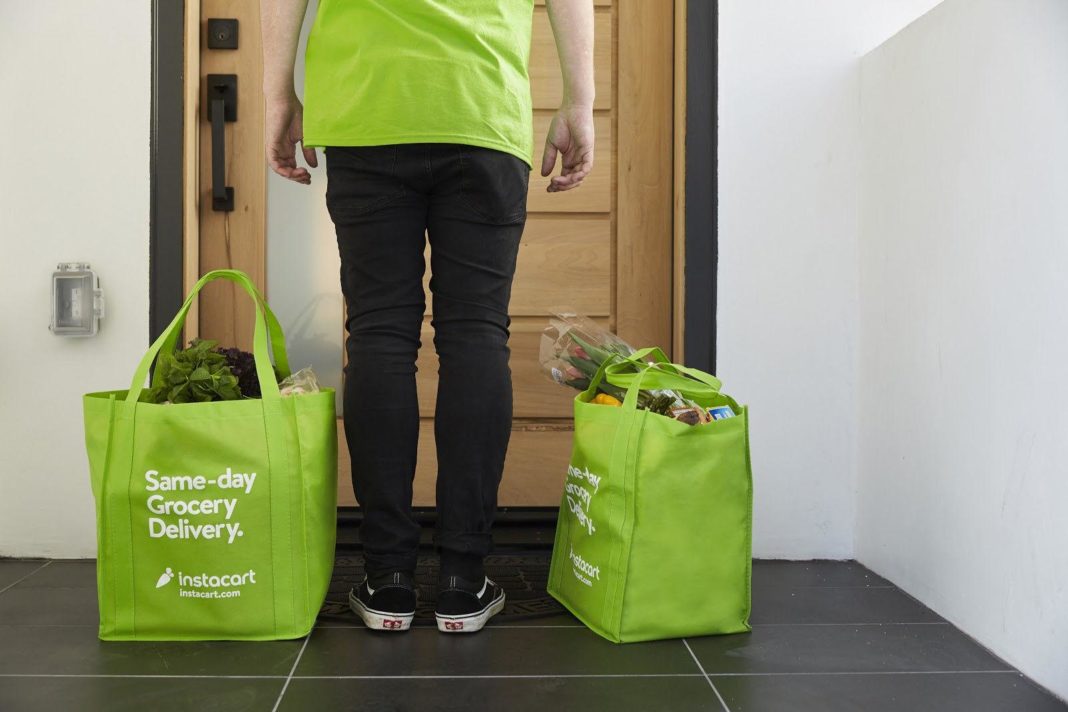 On March 30, tens of thousands of workers at Instacart shut off their apps and refused to accept grocery orders. Amid the COVID-19 crisis, grocery shoppers and delivery drivers have been deemed “essential workers,” and joined Amazon warehouse workers in Chicago and New York, factory workers at GM, and elsewhere in a series of workplace actions sweeping the country.

Instacart, the grocery delivery app, is valued at over $8 billion. They employ 185,000 workers and recently announced they’re hiring 300,000 more to keep up with unprecedented volume they’re experiencing during the COVID crisis. The overwhelming majority of these workers are “full-service shoppers” (meaning they shop for groceries at a number of stores in a given region and deliver them), and are misclassified as independent contractors, like most gig-workers nationwide, making even basic workplace protections like the right to unionize unavailable to them. A small section of the workforce are employees, the “in-store shoppers,” who shop for groceries in one store and stage them on shelving units for delivery drivers to pick up. In Skokie, IL, these Instacart employees successfully held a vote to unionize earlier this year. This sparked a wave of unionization efforts nationwide, led up by the United Food and Commercial Workers union (UFCW).

We Need to Fight Back

Instacart workers have been hit hard by the COVID crisis. They’ve received little to no PPE, were promised hand sanitizer which very few workers have received, and got no hazard pay or paid time off for pre-existing conditions. Instacart has introduced a limited sick-leave policy that says workers will get two weeks “quarantine pay” if they test positive for COVID, or are put under mandatory quarantine. Given the scandalous shortage of COVID-19 tests and the well-publicized near impossibility of getting tested, this policy makes it almost impossible for workers to receive this pay. Adding insult to injury, this policy was only in place until April 8.

Workers at Instacart have been widely subject to what’s known as “tip-baiting.” A customer puts a massive tip on an order in the app, coaxing a worker to take it, but when they fill the order and deliver it to a home, they see the tip has been zeroed out, so they receive no additional money other than what they get for an order, sometimes as little as $7. While there are certainly customers who tip-bait, it’s also highly likely Instacart is taking the tips for themselves and shifting blame onto customers, a practice Postmates was sued over in 2019.

With conditions in the stores rapidly deteriorating, Instacart workers organized a fightback. A group called the Gig Workers Collective (GWC), that runs a national closed Facebook group of 15,000 Instacart shoppers and have organized 4 walkouts in the past, called for an emergency indefinite strike. Gig Workers Collective put forward four demands:

Because of the current fighting mood around essential workers, the depths of the COVID crisis, and the organizing and unionization already developing, this call was taken up by Instacart workers all over the country and the strike call was transformed into a genuine, semi- spontaneous mass action.

Through the first week of the strike, tens of thousands of Instacart workers took part. This was clear looking at the worker Facebook group. Screenshots of “zones” (regions where shoppers can pick up orders from a number of stores) indicate as many as 40-50 orders were available for pick-up. Under normal conditions, only five orders may be available at a given time. These reports came from all over the U.S., in places like Florida, Wisconsin, Chicago, Arizona, Boston, and Seattle. The strike pushed wait times for customers to receive their orders to as long as nine days after they were placed. Deli counter workers in grocery stores were left asking “where is Instacart?” after preparing dozens of deli orders that were never picked up. These are major indicators that the strike took on a life of its own and had a real impact, despite Instacart releasing a statement claiming that operations hadn’t been affected.

Because of the nature of the gig economy and the atomization that flows from workers’ misclassification as independent contractors, strike participation was uneven, as the decision to join the struggle was an individual one. This speaks to the urgent need for unions such as UFCW to help independent contractors build workers’ organizations that can cut across this atomization and build real connections between gig-workers that encourages solidarity and lead bold fightback around demands in their workplace and can win re-classification as employees.

Despite these factors, there was a strong core of striking workers that brought Instacart’s service down to a slow crawl in the initial days. This effort won a clear victory, when on day four of the strike, Instacart announced they would be producing safety kits for their full-service shoppers (gloves, a mask, thermometer, and hand sanitizer in one bag), and masks for in-store shoppers. This shows how all big businesses are susceptible to pressure when workers organize around key demands. Instacart also agreed to extend the sick-leave policy through May 8, which still isn’t long enough but is a step forward.

At the same time, these victories are severely limited. It’s not clear how many safety kits or masks Instacart will be able to provide, or when. Safety kits were made available for request in the app on April 6, and were sold out in 10 minutes! They’ve been made available in limited windows since. Very few, if any, workers have actually received the kits. Safety kits for in-store shoppers finally arrived in late April, despite them being repeatedly promised as coming imminently. Without a strong show of strength in the heat of a strike, corporations can find endless numbers of ways to wiggle out of the promises they make, just as Whole Foods did when they were pressured into paying their workers $15 an hour but took it back by cutting workers’ hours overall and reducing the size of their workforce.

Lessons for the Future

As the strike lengthened to over a week, support fell apart. This was apparent after it became clear the safety kits weren’t coming in large enough numbers or even at all. Large sections of the Facebook group lost faith in the effectiveness of continued strike action, believing that they hadn’t really won anything and the strike was a waste of time. Unfortunately, GWC released a statement in the heat of this moment saying it was ok for workers to go back to work. Strikers were searching for ways to escalate the struggle, to bring more workers into the strike. What was needed was for workers to get organized on the ground beyond just on Facebook, including direct and constant communication between GWC and the workers. GWC could’ve used the group to identify key workers in every part of the country that could’ve become “strike captains” along the way, relaying information and trying to build support for the strike. Zoom meetings could’ve been organized to discuss the strike and democratically decide tactics, and when to end the strike. Instead the strike call extends indefinitely despite workers overwhelmingly back at work, sewing confusion among the workforce.

Additionally, gig-workers rarely work just for one app. Someone will be working for Instacart, driving for Lyft, delivering for GrubHub, Postmates, etc. Gig workers’ ability and need to bounce from one app to another shows the precariousness of the gig economy and the structural barriers to getting organized, including the lack of a physical workplace and their legal classification. These are the major factors in the Instacart strike being an individualized, passive action that can only be cut across by a relentless, fighting organization.

The Instacart strike is a part of the first steps that the working class is taking in the wake of the biggest crisis capitalism has faced since the Great Depression. It is crucial that we learn these lessons and start to rapidly build workers’ organizations in independent contractor workforces and across the working class. Then when the time comes for the next Instacart strike, we are twice as organized and prepared to win big gains on pay and sick-leave.