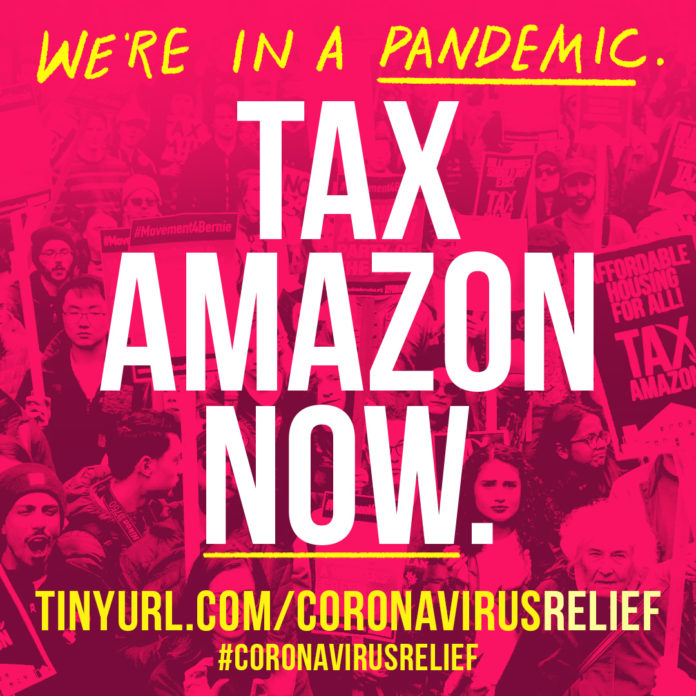 As the coronavirus health crisis necessitates closing down non-essential sections of the economy, unemployment has exploded. A full third of renters nation-wide missed rent payments in the first week of April. Already a city with high and rising housing costs, Seattle is in desperate need of affordable housing. It is the rich who should pay for the disastrous collapse of their system. The Tax Amazon campaign is bringing a ballot initiative to do just that, funding affordable housing and safe jobs for working families, paid for by the same corporations Trump is bailing out.

The victory of Kshama Sawant’s re-election campaign and the campaigns of other candidates opposed by big business in 2019 set a mandate from people in Seattle: Tax big business to address the housing crisis.

The movement to Tax Amazon is strong and growing today – despite multiple attempts by the political establishment to kill it and the disorienting impact of the coronavirus crisis – because it reflects the actual needs of working people in Seattle for affordable housing, living-wage jobs, and progressive taxation. This public health crisis, fueled by the inequality and profit-driven priorities of capitalism, has only served to underline these basic material needs of working families.

Going into this crisis the majority of Americans couldn’t afford to miss a paycheck, while over two-thirds had less than a thousand dollars in the bank. With millions facing layoffs and loss of income, this system has given us no economic breathing room. Despite temporary relief for some workers included in the federal stimulus package, the lion’s share will go directly into the pockets of the billionaire class.

In recent weeks, the campaign to Tax Amazon has seen an outpouring of support as more and more families realize that collective struggle is necessary to defend our physical and economic security during this crisis.

We have a two-pronged strategy to get our initiative on the ballot. We will gather digital signatures and build pressure to make the state accept them. But because we know the state does not act in the interest of working people, we won’t rely on that and will be using every safe means at our disposal to get print signatures also.

The Tax Amazon campaign hosted nearly 150 people in a virtual signature gathering launch in early April. Speakers included labor union members, frontline workers, tech workers, and Socialist Alternative member Kshama Sawant, who is leading the fight in Seattle City Council. The initiative would build up to 8,000 new permanently affordable homes over the next ten years, and upgrade tens of thousands of homes to Green New Deal standards through a tax on the biggest two percent of companies in the city.

The other point of the initiative is pressuring the City Council to pass legislation brought forward by Kshama Sawant and councilmember Tammy Morales. This bill would immediately implement a $200 million relief for workers that would roll into an annual tax on big business for $500 million to build social housing and upgrade existing housing to Green New Deal standards.

To overcome the challenges of social distancing we’ve developed a creative social media and phone-banking approach to gathering signatures, having supporters reach out to personal networks to host virtual house parties and public meetings; and phone-and-text banking Seattle residents directly to secure their signatures. Sign up to help out and donate today.

What We Stand to Win

If we win, $300 million every year would go towards sustained employment and building up to 8,000 union-built homes in the next decade. This investment would surpass all the development Amazon has put into their Seattle campus to date.

These affordable units will provide an alternative to the failed private market for housing. The existing units that are out of reach for many and sometimes sit empty will have to compete with a growing option for affordable living.

Perhaps most important, workers across the country will have a concrete example proving that we can stand up for ourselves and build the movements we need to take what’s being denied to us by a system that is willing to send us to work sick and throw us out into the street. I hope you’ll join us in this fight, we have a world to win!