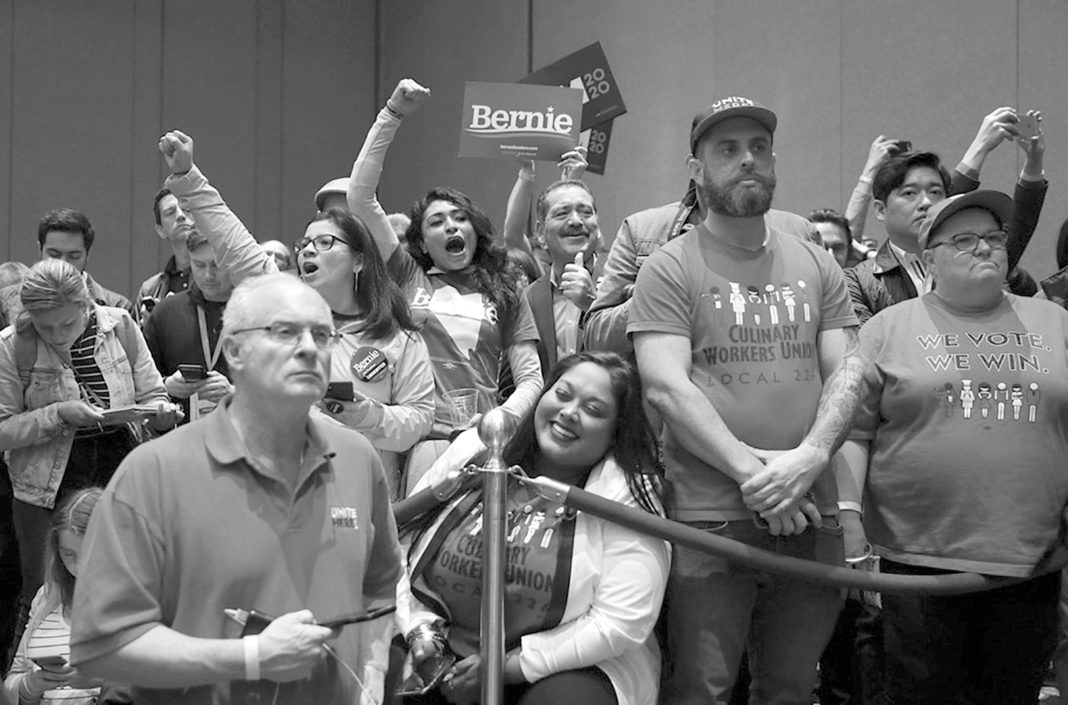 Before the Nevada caucuses, the Culinary Workers union, Local 226 of the national union UNITE-HERE, passed out leaflets to its members claiming that Bernie Sanders’ Medicare For All would “end Culinary Healthcare,” the health plan which its members depend on.

In Nevada, union leaders’ attack on Bernie seriously backfired. Rank-and-file members of UNITE-HERE have their own views on their health care plan which resulted in the Culinary Workers local making no endorsement, and on caucus day its members voted in massive numbers for Bernie, the candidate of Medicare for All (The Intercept, 2/23/2020).

The vast majority of union activists recognize that Medicare for All would take medical costs off the bargaining table, sharply reducing the employers’ power to intimidate union members and cut into wage claims. The threat to take away health care is a key factor in most union fights.

Publicly, UNITE-HERE leaders put forward a fallacious “sunk-cost” argument – “we sacrificed for this” – implying that when the war over health care is ended, the sacrifices made to win it will have been in vain. They also argued that the health care benefit is an essential organizing tool for their union, a transactional point of view which, as CWA flight attendant leader Sara Nelson has pointed out, relies on exploiting unorganized workers’ lack of access to health care instead of fighting for working class solidarity.

There is no question that for workers, especially in the traditionally low-paid hotel and restaurant industry, the hotel union’s health plan was a huge step forward, one that union members tenaciously fought for. However, as with all employer-based health care, the plan has serious limitations, and as always – if you lose your job, you lose your insurance.

But there is also a serious conflict of interest behind the UNITE-HERE leaders’ position. UNITE-HERE Health, which does business in Nevada as the Culinary Health Fund, is a massive nonprofit organization, taking in more than a billion dollars in 2017 (ProPublica.org, 03/2018). As a joint labor-management venture it is run much like any other health plan – spending $15 million a year on an administrator, Zenith Solutions, which is in the business of denying benefits, using a notoriously anti-union law firm (Seyfarth Shaw) to manage its accounts, and paying exorbitant salaries to its President, Chief Executive, and others. A 2012 IRS filing shows that health care executive Kathleen Silver, who had recently resigned under a cloud after failing to turn around the fortunes of the Las Vegas University Medical Center was hired to serve as Las Vegas-area President of the union-administered fund, getting paid $370,926 in her first year while another professional health management executive, Thomas Zumtobel received $416,496 as “Vice-President of Strategy.” By 2017, Ms Silver’s pay had risen to $410,984 while Mr Zumtobel had left the fund to set up various other health care management firms.

UNITE-HERE Health also sponsored a Nevada-based health care cooperative which was one of the first recipients of an Obamacare fund to promote such co-ops, receiving a $65.9 million loan in 2012 but going bankrupt after less than four years in operation, leaving providers unpaid and in many cases, billing their patients for their losses.

News reports confirmed by tax filings with the IRS show that one of the highest paid officers of this fund is a health care lobbyist, Bobbette Bond who is married to Donald “D” Taylor who at the time was principal officer of the Las Vegas affiliate of UNITE-HERE, Local 226. Taylor is now the union’s International President.

In the same year, the national UNITE-HERE Health fund employed Elizabeth Gilbertson as its Chief of Strategy for a total compensation of $379,560. Ms Gilbertson is married to former International President John Wilhelm, who like current President Donald “D” Taylor is a Trustee of the Fund. Mr Wilhelm continues to collect a six figure union salary as an Assistant to the President while D Taylor’s 2015 compensation as Union President was $397,195.

Overwhelmingly, the union leaders that oppose Medicare For All have similar conflicts of interest. A major factor leading to the degeneration of the leadership of the United Auto Workers (UAW) was the creation of VEBAs (Voluntary Employee Benefit Associations) in which UAW members’ main employers, GM, Ford, and Fiat-Chrysler unloaded their health care and pension obligations onto the union. This created a conflict of interest between the union’s role as defender of its members interests, and its new role as administrator of their benefits. It also created a massive pool of jobs to be handed out as patronage rewards to union officials who might otherwise have challenged the union leadership. The same dynamic exists in the construction unions and Teamsters, all of whom manage multi-million dollar health and welfare funds.

A universal, publicly owned and democratically controlled public health and pension system would abolish these corrosive conflicts, but socialists aren’t waiting for that victory. We also demand that officials elected to represent the working class should live within the same means as the workers they represent. This is the case with Seattle’s Socialist Councilmember Kshama Sawant who only accepts the average wage of a Seattle resident and the same needs to apply to union leaders.