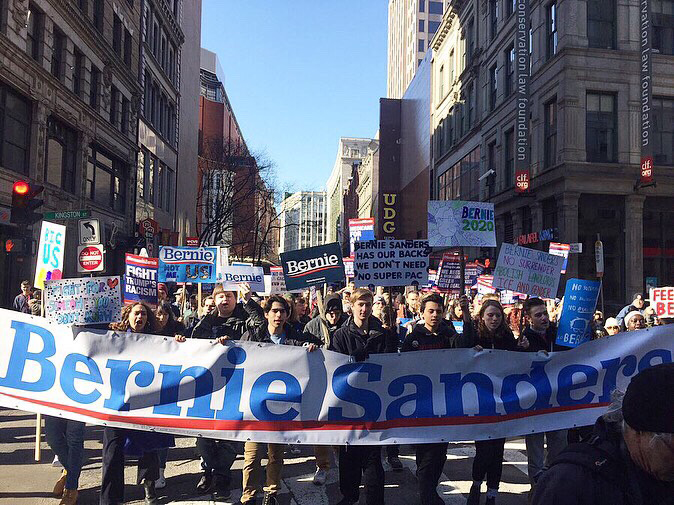 Chants of “hey hey ho ho, billionaires have got to go” and “not me, us” echoed off the buildings in Boston’s financial district as one thousand Bernie supporters marched through the city’s downtown. The march and rally, organized by Socialist Alternative, showed the strength of the dynamic movement of workers and young people behind Bernie’s bold platform, a movement that is only getting stronger.

“This is a pretty good indication of a people-powered movement. He’s got the power of the people behind him,” said Sarah Frazier, a stay-at-home mom who brought her infant daughter to the rally with her.

Contingents of students from local colleges, union construction workers, union educators and many more flocked to Boston Common to show their support for Bernie. “Bernie Sanders has our backs, we don’t need no super PACs” read one sign. “Fight for someone you don’t know” read another.

Carey Howard, a health care worker and member of Socialist Alternative who spoke during the rally, got wild applause and cheers as she called for a million people to travel to Milwaukee this summer to support Bernie and guard against any undemocratic maneuvers of the DNC during the Democratic National Convention.

But beyond fighting to get Bernie elected, she said, Bernie supporters need to keep building a mass working class movement to win Medicare for All, a Green New Deal, free public college and more.

“What we are out here fighting for is a complete shift away from corporate politics that serve billionaires at the expense of the rest of us,” she said. “We need to continue to build a powerful socialist movement to win Sanders’ platform and end the for-profit system of capitalism all together.”

Ordinary people don’t belong in the same party as Joe Biden or Michael Bloomberg, she said. That’s why we need a new party, free from corporate influence and entirely run by the working class.

The march and rally came as the leaders of the Democratic Party scramble to halt the growing movement of workers and students who are rallying behind Bernie’s demands, with relentless attacks in the corporate media and a last-minute rule change to allow Bloomberg to participate in the most recent debate. Many people in the crowd said this campaign cycle has fully exposed the real nature of the establishment leaders of the DNC.

“I don’t think (the DNC) are concerned with working people’s values. I think they’re more concerned with their donors. But I think we’re gonna come out and vote in big enough numbers that they can’t deny our movement,” said Frazier.

People in the crowd pointed to health care costs, crushing student debt and the climate crisis as some of their biggest motivations for voting for Bernie.

Chris Joazard, a student at the University of Massachusetts Boston who’s involved with his school’s campus Bernie group, said it will take tactics like workplace walk-outs to win the demands that first attracted him to Bernie’s campaign. Joazard said he’s confident that Bernie, with his promise to be the “organizer in chief,” is the only candidate who would help lead the way in the struggle for Medicare for All, a cancellation of student debt and a living wage.

“Bernie’s the only one who’s really fighting for the people,” he said.

The march and rally was a powerful display of grassroots organizing. Activists from Socialist Alternative, Democratic Socialists of America, student groups from across the city and others passed out 10,000 flyers and hung up 1,500 posters to build for the event. All in all, it showed workers and students are ready to take Bernie at his word when he says “not me, us,” building a mass movement to fight back against oppression and win the change we need.