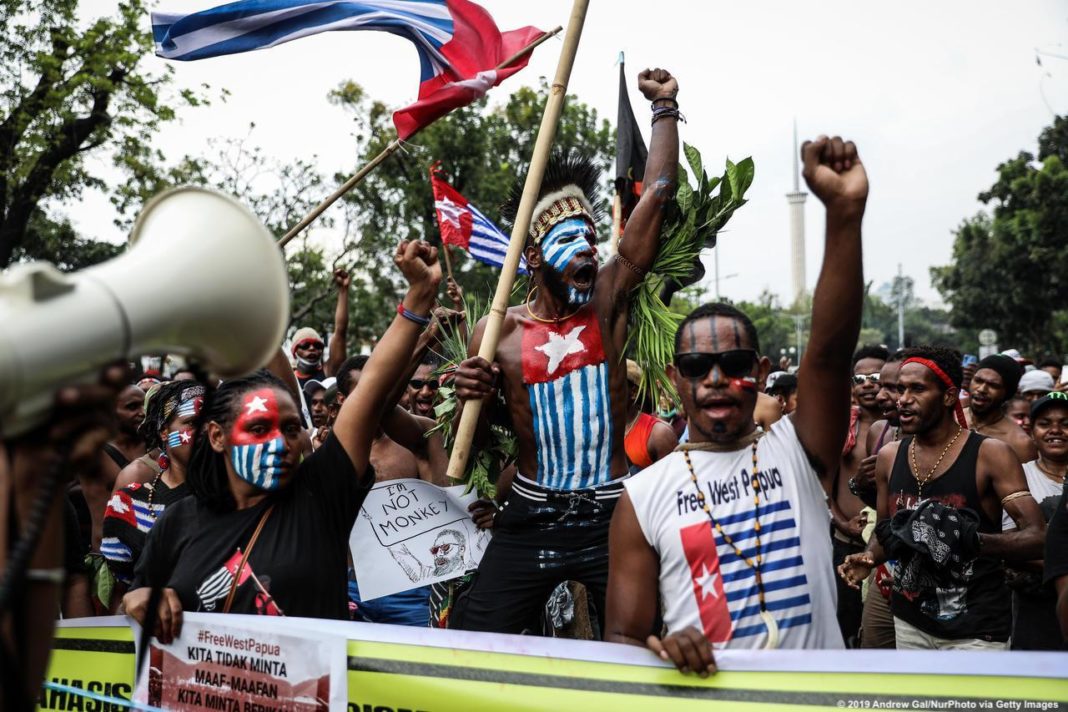 In August and September last year, thousands of Papuans demonstrated across Indonesia to oppose the occupation of West Papua. Protests were planned for the same day that the topic of West Papua was raised at the Pacific Islands Forum. Attacks by police and racist vigilantes then spurred them on to become the biggest West Papuan protests in years.

Indonesian police used vicious anti-democratic laws against the protesters, even arresting small children for being at demonstrations. Papuans routinely face racist abuse and violence, and a number of the protests were met with rallies by far-right militias. Racist slogans and chants of “massacre Papua!” were heard at these counter-rallies.

Despite the racism, there has been growing support for West Papuan independence among Indonesian people. Two Indonesian students in Surabaya were arrested and beaten after they attempted to bring food and water to Papuan protesters.

In response to the growing movement, the Indonesian government sent 6000 police and soldiers into West Papua, and blacked out the internet there. Activists were targeted for the crime of “expressing separatist opinions”. Police opened fire on demonstrators in a number of places, and dozens of people were killed. Tear gas, rubber bullets and live rounds have all been used.

The Indonesian lawyer Veronica Koman, who regularly tweets about human rights abuses in West Papua, fled to Australia in September. Indonesian police have charged her with “spreading hoaxes” for sharing news of Indonesian repression. The government issued an Interpol red notice, and the Australian government and Australian Federal Police have shamefully refused to rule out complying with an international arrest warrant, if one is issued.

The Indonesian government continually lies about what is happening in West Papua, and acts to stop information from getting out. It has a long history of brutally suppressing dissent. This violent repression is carried out in the service of capitalism.

A history of imperialist rule

West Papua was ruled by the Dutch colonial empire until World War 2, when the Netherlands surrendered to Nazi Germany. It then passed under the control of Japan, in an alliance with Germany. After the Japanese surrender, the Indonesian War of Independence broke out to fight the re-establishment of the Dutch colonial regime. But West Papua remained under Dutch control until the early 60s.

The head of the young Indonesian state was Sukarno, a leader in the armed liberation movement against the Dutch. Sukarno was a populist figure, and tried to balance between the left and the right. Pushed by the large and influential Indonesian Communist Party (PKI), Sukarno carried out some progressive reforms. However, he was not interested in democracy, or in breaking with capitalism.

The United States and United Nations brokered an agreement for the Dutch to hand West Papua over to Indonesia in 1963. They wanted to appease Sukarno, who was leaning toward China in the Cold War. In addition to this, US mining executives, who wanted access to West Papuan minerals, had positive relationships with elements of Sukarno’s regime. Their most important ally was one of his generals, the future dictator Suharto.

During this time, General Suharto moved to oust Sukarno on behalf of the capitalist class. In 1965, Suharto launched an anti-communist terror campaign that murdered a million people and wiped out the PKI. He seized power in 1967. While Sukarno had made moves toward independence from the major capitalist powers, Suharto gave them special access to the region’s resources.

“Act of No Choice”

The 1969 independence referendum was called the Act of Free Choice, but critics refer to it as the Act of No Choice. Instead of polling the 800,000+ residents of West Papua, the Indonesian military picked 1026 people to take part in the vote. The army controlled these delegates with a mixture of bribes and threats to their families. The vote was unanimous to remain under Indonesian control.

Just a year earlier, classified documents from the US consulate in Indonesia had said that “Indonesia could not win an open election”. The Indonesian government had almost no support among ordinary people in West Papua.

Indonesian repression ramped up after the referendum. The government put further bans on expressions of West Papuan culture. It’s estimated that more than 100,000 West Papuans have since been killed by occupying forces.

The major capitalist powers supported this repression, with the United Nations accepting the fake referendum. The Australian government played a role in shielding the Suharto regime while it attacked West Papuans. Australian authorities denied asylum to refugees escaping the Indonesian army.

During the referendum, two West Papuan politicians, Clemens Runaweri and Willem Zongganau, crossed into Papua New Guinea. They tried to board a plane to New York, carrying documents that would expose the referendum as a sham. When their plane stopped to refuel, they were locked up by Australian authorities until after the vote.

Repression in the name of profit

All of this has allowed capitalists to make billions of dollars by having special access to West Papuan resources. The area has large reserves of gold, copper and natural gas. Mining dominates the economy, with many relying on it for jobs. At the same time, West Papua experiences extreme poverty. As of 2017, 28% of the population lived below the poverty line.

The US mining company Freeport, now Freeport-McMoRan, received permission to mine in the same year Suharto came to power. Along with Melbourne-based Rio Tinto, they developed the Grasberg mine, the largest gold mine on Earth (and the second-largest copper mine). Under the current president Joko Widodo, the Indonesian government has taken majority ownership through the state-owned company Inalum.

Rio Tinto and Freeport have paid millions of dollars directly to the Indonesian police and military. These bodies wage terror campaigns against West Papuans. They carry out torture, rape and murder and routinely arrest people for speaking out. They are also used to suppress striking workers.

Local militias who support independence often carry out attacks on Indonesian forces. These guerrilla campaigns have sometimes targeted workers. This is used by Indonesian forces as an excuse for bloody reprisals. In December 2018, a militia in Nduga killed 24 construction workers. In response, the army burnt houses and bombed villages. 39,000 people were forced to flee their homes, with scores dying of famine and disease in refugee camps.

As well as physical violence, racism is used by the elite to divide and rule ordinary people. West Papua is home to a large number of Indonesians, mostly from Java, who were moved there under Indonesia’s ‘transmigration’ policy. The government stokes racism between transmigrants and Indigenous Papuans, but at the end of the day, both groups are exploited to create profits.

Capitalism has also caused massive environmental destruction in West Papua, from mining operations to oil palm plantations. Revenues overwhelmingly benefit foreign and local capitalists and corrupt government politicians. Local people have no democratic control over what happens – decisions are made for the sake of profit.

Contrary to what capitalists say, those decisions are not focused on preserving jobs or encouraging local development. Workers are discarded whenever it benefits those in power. For example, Freeport introduced forced leave affecting more than 30,000 employees in 2017, and when workers took strike action in protest, more than 4000 were sacked at once.

A united socialist struggle is needed

Capitalism is the driving force for human rights abuses in West Papua. Capitalists have always been staunch enemies of democracy in the third world. Independence for West Papua will not be enough to free Papuans from the rule of capital.

The history of neighboring countries shows this to be true. Most countries in the region, like Indonesia itself, have won independence on a capitalist basis, and all have failed to lift their people out of poverty.

The guerrilla struggle in West Papua has little hope of improving things. History has shown that even when guerrilla struggles are able to transform society, like in Cuba or Vietnam, they fail to win democratic rights because they are not led by a democratically organized working class. Instead they disempower ordinary people.

The way forward lies in building a movement led by workers. This movement needs to cross ethnic divides. Despite cultural differences and racism encouraged from above, transmigrants have more in common with Papuans than with the capitalists who exploit them both. Including them in the struggle is vital to undermine the far right. Similarly, the movement must also forge links with the working class of Indonesia, who have the potential to stop the Indonesian government in its tracks.

Enough wealth exists to transform the lives of everyone in the region, but it is stolen in the form of profit. Workers produce all this wealth, and can take their workplaces into public hands to be democratically managed. Unlike Indonesia’s state-owned companies like Inalum, who are focused on profit, democratic worker’s control would mean prioritizing people’s livelihoods, the environment, and Indigenous land rights.

A movement that rejects the profit system has the potential to offer a real future to all. Such a movement will need to stand for a democratic socialist West Papua, as part of a socialist federation of the region and the world.