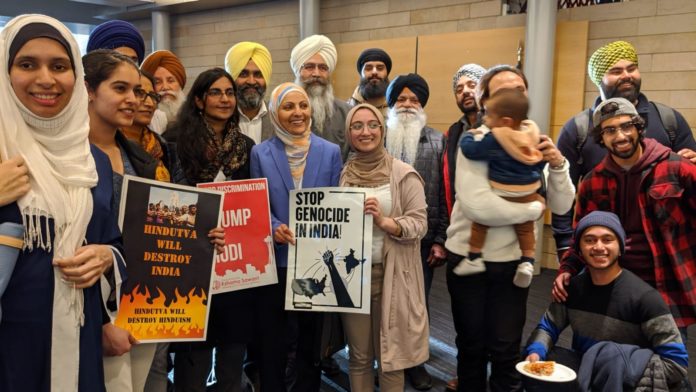 Together, the NRC and CAA would strip citizenship rights from certain religious and ethnic minorities in India, including two-hundred million Muslims, unless they can meet onerous documentation requirements. Such documentation would not be required at all for members of the Hindu religious majority, while the wealthy and upper caste would generally be able to skirt the requirements.

Echoes of the Third Reich

Many have already noted the frightening similarities between the NRC-CAA and the Nuremberg laws enacted early by the Third Reich in 1930s Germany.

Before the concentration camps and the death camps, the Nazis passed the Nuremberg Laws including the Reich Citizenship Law, which redefined German citizenship to exclude Jewish people. The result was the isolation of Jewish communities, making them an increasingly easy target for scapegoating. The CAA and NRC have ominous echoes.

There is also a clear comparison to what the Chinese regime is currently doing in Xinjiang province where hundreds of thousands of Muslim ethnic Uighurs have been put in detention camps with the goal of “reeducation” and seeking to destroy their culture. There are indications that this is the model the BJP is looking to with credible news reports that the Modi regime has already put many people who have been unable to prove their citizenship in detention centers and prisons, and that new ones are now being built.

These bills can be compared to the attacks Trump has made – from the Muslim Ban, to the detention of immigrants though Modi is going much further. Trump and Modi even held a joint rally last year in Texas called “Howdy Modi.” Passage of the NRC-CAA will further embolden the right wing here and internationally. However, a defeat of the NRC-CAA would inspire people around the world to fight with renewed confidence against religious persecution, racism, Islamophobia.

Across India, millions are already fighting back against the racist citizenship laws. On January 8, 250 million Indian workers conducted the largest one-day general strike in world history, demanding not only that the NRC-CAA be rescinded, but also drawing attention to the economic devastation, corruption, rampant privatization, and neoliberalism in the country. But as of now, Modi and the BJP are not backing down. Resolutions like Councilmember Sawant’s can help draw international attention to this urgent struggle. Sawant’s office received reports that people were watching the Seattle City Council vote in public squares in India. Internationally acclaimed novelist and activist, Arundathi Roy, sent a statement in support of the resolution. After the ordinance passed, Kshama’s office received calls from New York, Salt Lake City, and other cities from people who want their City Councils to pass similar resolutions.

The Modi government knows the impact that this resolution could have. In the days leading up to the resolution’s passage, the Consul General of India in San Francisco, Ambassador Sanjay Panda, sent in a letter to the Seattle City Council urging them to vote “no.” Luckily, Councilmember Sawant’s office, along with many South Asian cultural and human rights organizations, including API Chaya, Tasveer, IAMC Seattle, Council of American-Islamic Relations (CAIR) Washington, Muslim Americans of the Puget Sound, Seattle South Asians Building Accountability and Healing (SABAH), Khalsa Gurmat Center Federal Way, Gurudwara of Renton, Gurudwara of Auburn, Gurudwara of Kent, Gurudwara of Bothell, the City of Seattle LGBTQ Commission, Equality Labs, Amnesty International USA, and the Ambedkar King Study Circle were able to rally the community to put counter pressure on the Council, and ultimately win the resolution’s unanimous passage.

This victory has been heralded by news outlets across India as an important step towards building international pressure on the Modi regime to scrap the NRC-CAA. Councilmember Sawant celebrated the win with a call for the movement to spread to other U.S. cities and tackle the roots of racism and discrimination:

“People around the world are standing up against this religious persecution and Islamophobia, the discrimination, scapegoating, and oppression of Muslims, poor people, and marginalized communities by the Hindu fundamentalist regime. This victory is an example of how when we build fighting movements that unite working people across religion and nationality, and we have our own elected representatives as we do through my socialist council office, we can push back against the political establishment and win!

But our movement will need to fight to get such resolutions passed by other legislative bodies around the country, just as we had to fight to get this one passed here. Working people will need to urgently begin building movements in other American cities like the one we built here in the Seattle area.

We need to organize a serious left alternative to the ruling parties both in the United States and in India, which have failed to address even the most basic needs of working people, and have created a political vacuum that has been seized upon by the far right. We will need to build a new party for working people, a party that will represent the interests of the majority, not the super-wealthy and the elite.

We will not defeat the xenophobic forces behind Trump and Modi with the same old corrupt political establishment tied by a thousand threads to Wall Street and the billionaire class.”