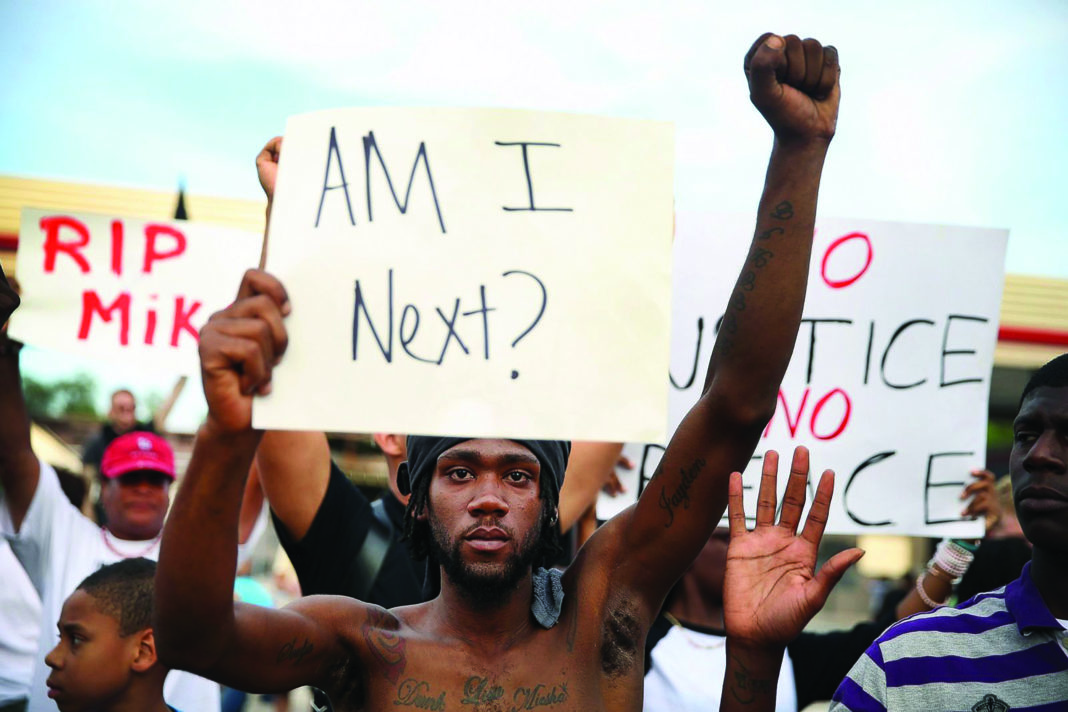 In 2014, a black teenager was shot by a cop in Ferguson, Missouri. His name was Michael Brown Jr., and law enforcement officer Darren Wilson fired six bullets into him – one through the right eye in a downwards direction. He was 18 years old and bound for college.

The death of Mike Brown sparked mass protests across the country. The city of Ferguson erupted into passionate rage. In spite of a wave of multiracial protests across the country, a grand jury decided to not indict Darren Willson for the murder of Mike Brown. Working people in Ferguson went into the streets. The Ferguson police responded with rounds of tear gas and rubber bullets.

Mike Brown’s death and the Ferguson rebellion was the spark of the Black Lives Matter (BLM) movement. The black working class of Ferguson sparked the rebellion that took aim not just at racist policing but at rampant inequality. In 2014, Ferguson’s median household income per capita was around only a wretched $21,000. In 2012, about one in every four residents lived below the poverty line. Ferguson was entrenched in poverty. This poverty is a cruel fact of life in every ghetto in the United States due to low wages, mass incarceration, and lack of affordable housing.

Segregation and poverty are not new realities in the U.S., but they have been massively reinforced in the neoliberal era beginning in the ’80s with the decimation of good union jobs for black workers and the enormous growth of inequality, which hits black and brown people hardest. Things got even worse in the aftermath of the 2008 crash and collapse of the subprime housing loan market, which led to a massive loss of wealth in black communities. Nor did the change in rhetoric under the first black president make any real change, although it encouraged young people to hope for and demand more.

The underlying reality was summarized in a 2018 Urban League study: “To put a number on it, African-Americans are at 72.5 percent – less than three-fourths – when it comes to achieving equality with white Americans, according to the study, which addressed economics, health, education, civic engagement and social justice” (U.S. News And World Report, 5/4/2018).

Black Lives Matter began as President Obama declared a “post-racial” America. The moment protests broke out in Ferguson, Obama began to condemn the “violence” of the protesters while mincing words when it came to law enforcement ripping young people away from their families.

Many positive things were won by the grassroots movement of young black community organizers. Body cameras, community policing, and other reforms spread across the country on the back of an increasingly militant rebellion against the racist status quo.

However, many of these reforms have fallen short. Killer cops in this country are still generally untouchable – indictments are rare and guilty verdicts are even more so. Nearly a thousand people were shot and killed by police in 2019 in the United States, virtually the same amount as in 2015. David Jones, a black man in Philadelphia, was killed in 2017 by officer Ryan Pownall for nothing more than riding a dirtbike. Atatiana Jefferson, a 28 year old black woman living in Texas, was killed this year by police. Ferguson is still deep in poverty with the median income still around the same level as in 2014.

Another longer term trend reinforced by BLM is the decline of the number of people incarcerated, especially in federal prisons, partly due to sentencing reform. But this should not obscure the reality that the U.S. still has by far the highest incarceration rate in the world, disproportionately black and brown.

The failure to achieve more decisive change on the core issues of policing and criminal justice generally was a serious setback for the Black Lives Matter movement. The election of Trump and his reactionary regime made it clear that any opposition toward law enforcement would be met with serious repression. An example of this is the passing of the “Blue Lives Matter” bill by congress in 2018, which made assaulting police a federal hate crime. The bill reinforces the ability of cops to use the excuse of being threatened by black youth, such as Mike Brown, or feigning being assaulted, such as George Zimmerman had done with the killing of Trayvon Martin. On top of all of this misery, over the past five years a number Ferguson activists have been mysteriously found dead with single bullet wounds through their heads. All of these factors contributed to a mood of hopelessness and despair.

A broader issue that faced the Black Lives Matter movement from the beginning was the need to more deeply root itself in the black working class and to take up and fight around all the issues facing people. This approach would have helped to spur the building of a wider multiracial workers movement against all the attacks of the ruling class.

During the height of Black Lives Matter, Socialist Alternative sought to connect the demand to end police repression to a wider program including a “guaranteed quality jobs with a $15 an hour minimum wage, as well as a massive investment in public education, transit, health care, and other economic services paid for by taxes on the super-rich and corporations.” Some of these demands were taken up by the movement in Boston and elsewhere.

Building a Sustained Movement against Racism and Capitalism

There is an urge today to re-ignite the fight for black liberation, this time with a sharper political edge. It’s shown with the protests in response to the acquittal of the cop killing of Anthony Smith in St. Louis as protesters chanted “No Justice, no profits.” It can also be seen with the huge amount of support for Bernie Sanders among young black people – black women in particular. A recent example was the Dream Defenders, a racial justice organization formed initially after the murder of Trayvon Martin, endorsing Bernie Sanders for President.

Young organizers of the once emerging BLM movement have learned lessons from Barack Obama’s administration which expressed sympathy for protestors but did very little to push for serious reform. In reality, in the big cities where a large section of the black population lives, it is generally the Democratic Party establishment, including its black representatives, who have overseen decades of police terror and entrenched segregation.

The corporate identity politics that have propelled the likes of Kamala Harris and Cory Booker have also been shown to represent a dead end for working class people. Obama who consistently supports the neoliberal, anti-working class agenda of the Democratic establishment now wags his finger at Sanders for going “too far left” and has threatened to weigh in to help block Bernie from winning the nomination.

What is needed is a fundamentally working class movement and a rejection of the neoliberal policies of the Democratic and Republican parties – one that is based around a program like Sanders’ and uses class struggle methods. Imagine the #Red4Ed, climate change, and black liberation movements combined with sections of the organized labor movement to jointly shut down points of production! It would cause a ripple effect across the world and mark a tremendous advancement of the class struggle in the United States.

Already we see the huge role played by black and brown workers in the recent wave of labor struggles, including in the #Red4Ed movement, as well as strikes by hotel workers, grocery workers and more recently the auto workers strike at GM. These strikes give visible expression to the reality that the labor movement and the working class itself is more racially diverse than ever.

The deaths of Mike Brown, Trayvon Martin, Sandra Bland, and many others are reminders of the task at hand. It’s not enough to jail killer cops. We need to bring an end to the capitalist system that has trapped us in a cycle of poverty and violence. A workers government, in which the economy is run by the multi-racial, multi-gender working class, would lay the basis for a socialist society free from racism, sexism and all forms of oppression. This is the real way to honor the legacy of all the victims of police violence and this racist system.