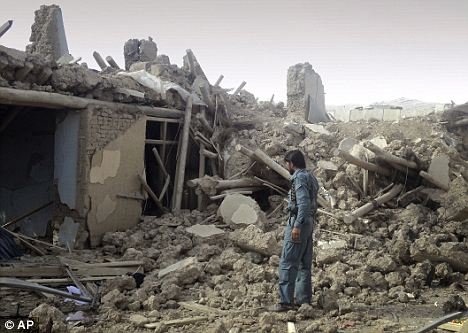 Tens of thousands of Afghan civilian deaths. Over 2,000 American soldiers killed. Over one trillion U.S. taxpayer dollars spent. The staggering costs of US military engagement in Afghanistan since 2001 take on an even greater weight in light of the complete lack of coherent strategy and public deception spanning three presidential regimes revealed by the Afghanistan Papers, a trove of government documents obtained by the Washington Post in December 2019.

In their responses, U.S. politicians and media have focused on condemning the revelations of how officials under presidents Bush, Obama, and Trump intentionally misled the American public about the amount of progress being made in Afghanistan towards establishing a “stable, democratic state.” Such deception exposes the sham of “government by the people” in capitalist America.

However, the larger indictment of the U.S. government and military lies in what it is exactly they were trying to hide: decades of continual dysfunction, instability, and widespread violence across Afghanistan as a direct result of U.S. intervention. U.S. counterinsurgent strategy was described by one interviewee as “colonial” in its lack of concern for ordinary Afghans. Other interviewees describe a widespread tolerance of “warlordism”, tens of billions spent in “development aid” with little to show for it except massive corruption, and a total absence of any coherent long-term strategy.

One interviewee stated “If we think our exit strategy is to either beat the Taliban – which can’t be done given the local, regional, and cross border circumstances – or to establish an Afghan government that is capable of delivering good government to its citizens using American tools and methods, then we do not have an exit strategy because both of those are impossible.”

Putting the lives of thousands of overwhelmingly young, working class American soldiers and tens of thousands of Afghan civilians on the line for a war with no clear objective and no functional on-the-ground strategy is an appalling abuse of power. And for what? Who are the beneficiaries of this scheme? The war in Afghanistan was about U.S. imperialism using the opportunity created by the terrorist attack of 9/11 to reassert its “right” to intervene militarily in the Middle East. The war in Afghanistan in turn paved the way for the disastrous invasion of Iraq.

The decades of bloodshed and chaos have massively enriched U.S. weapons manufacturers, military and DOD contractors, and helped two U.S. presidential administrations whip up patriotic support and deflect criticism from their domestic policy ahead of elections.

Today, as Donald Trump threatens to drag the U.S. into an escalating military engagement with Iran and boosts U.S. troop levels on the ground throughout the Middle East, the lessons of the Afghanistan papers could not be more relevant. Trump himself once warned on Twitter that a “weak” president might provoke military conflict with Iran to “look tough” heading into reelection. Trump now seems determined to continue the precedent set by Presidents Bush and Obama of treated the Middle East like a giant game of “Risk” in order to seek domestic political advantage.

However, fully drawing out these lessons requires elected officials from either party to admit to catastrophic failures by a former president from their own party. Joe Biden has never renounced his own vote in favor of invading Afghanistan in 2001 or his role in leading the Democratic charge to rally public to support President Bush’s invasion of Iraq. Pete Buttigeg recently stated his position that the U.S. had “no choice” but to invade Afghanistan in 2001.  Elizabeth Warren walked back a pledge made during a recent democratic debate to “pull all U.S. troops out of the Middle East” by clarifying that she was only referring to combat troops, a minority of the total U.S. forces deployed in the region. By contrast, Bernie Sanders has publicly called his vote for the Afghan invasion “a mistake” and voted against the invasion of Iraq.