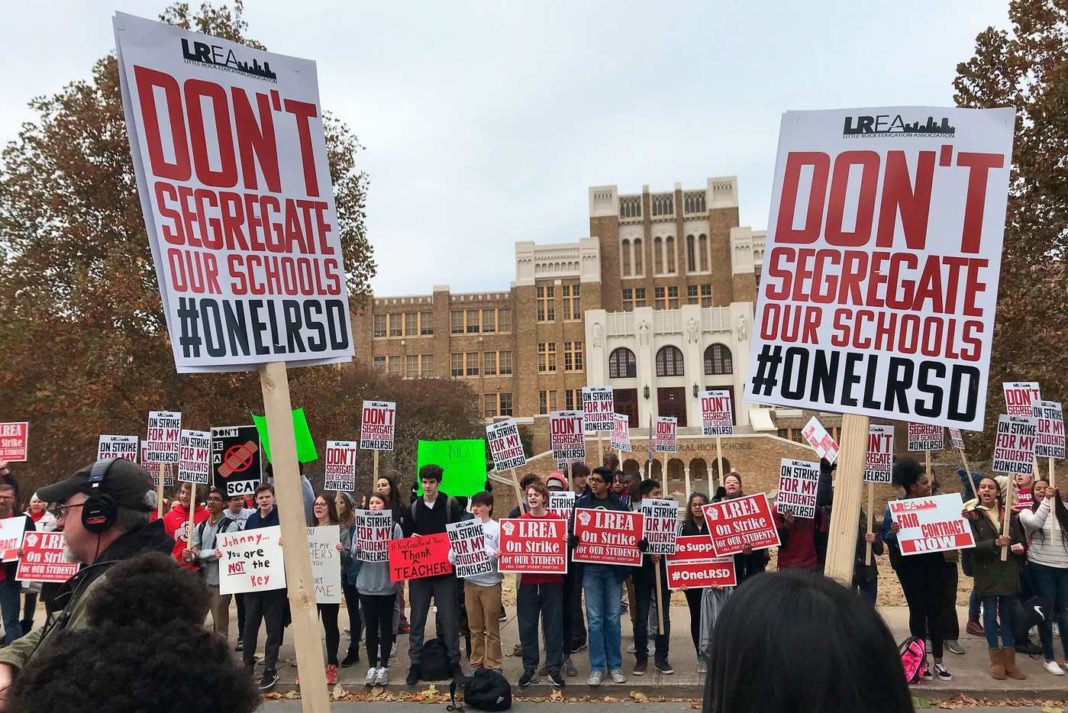 The Red for Ed movement spread to Arkansas on November 14 with over 1,800 teachers and 13,000 students participating in a one-day strike that included picketing at local schools, a rally at the Capitol building, and an action at an Arkansas Board of Education meeting. This marks only the second time that Little Rock teachers have gone on strike, and the last action occurred back in 1987. This time, the teachers’ are fighting against not only state control of the public and charter schools in the city but also against the influence of the anti-union, pro-charter school Walton Family Foundation, which has dominated education policy in the state for years.  As a result of the privatizing policy led by the Waltons, the schools have become divided once again along racial and class lines.

The Little Rock School District (LRSD) has been under state control since 2015, and teachers want the city to regain power over both public schools and charter schools. At the Arkansas Board of Education meeting, they agreed to restore limited local control with a school board election to be held in November 2020; however, the proposal would allow some local control of charter schools to happen first, while public schools would remain under state control for a longer period. Furthermore, the Board also stripped the Little Rock Education Associaton’s (LREA) of its right to negotiate on behalf of the teachers right before the October 31 expiration of the contract.  Under the slogan #OneLRSD, striking educators made demands to return all public and charter schools in the district to local control sooner and restore the LREA’s right to represent teachers in contract negotiations.

Although the strike lasted one day, teachers, parents, and students held other preparatory actions to demonstrate their commitment to challenge the state government. Over 3,000 students showed solidarity with their teachers on October 30 with sickouts, and on November 6, teachers, parents, and students staged walk-ins at forty schools in the district despite the rainy weather.

In retaliation, the state reminded teachers that they could be fired and rallied substitute teachers as strike breakers. After the strike, Little Rock Superintendent Mike Poole sent letters to the participating teachers notifying them that they would receive pay and benefit deductions as well as further disciplinary action. While the one-day strike was a step forward in the fight against state control, teachers have shown that they are committed to a long battle to win their demands.

The Waltons Push Their Agenda

The conflict between the teachers and the state government has been brewing for the past five years, when the state originally stripped the Little Rock School District of local control citing low test scores. Despite the state’s takeover, the quality of public education did not improve, and charter schools expanded during this time. Teachers and parents alike have complained about the “separate but not equal” school system that has put black and brown students in underfunded public schools at a disadvantage compared to their white counterparts in charter schools.

Aside from the state government, the Walton family played a major role in promoting charter schools and privatization in Arkansas. The Walton Family Foundation founded the Arkansas State Teachers Association (ASTA), an anti-union organization that opposes the LREA.  Shortly after the announcement of the strike action, ASTA even created an anti-strike fund with the claim that students’ educations should not be interrupted. Moreover, the Walton Family Foundation has given millions of dollars to push charter schools. It has provided funding for other organizations like the Arkansans for Education Reform Foundation (AERF) and Arkansas Learns, which also support the privatization of schools.  The Walton’s lobbying has played a role in Governor Asa Hutchinson and State Commissioner of Education Johnny Key allowing billionaires and big business to exploit the school system for the sake of profit.

Socialist Alternative fully supports the teachers’ demands for local control of all Little Rock schools and the restoration of the LREA’s rights to represent these educators. The people of Little Rock, teachers, students, and parents, cannot afford to wait for the next election or to rely on the Democratic Party establishment, which would likely do nothing to end the influence of the Walton Family Foundation.

Under capitalism, profit is prioritized over preparing students to become well-rounded, well-adjusted adults. The push for charter schools and privatization has resulted in consistent, unmitigated underfunding of public schools as well as racial resegregation of entire school districts. The fight against the privatization of the education system must be coupled with demands for fully-funded public education. The Red for Ed movement shows that working class people – whether they are teachers, parents, or concerned members of the community – are willing and able to fight for high quality public education for their children.