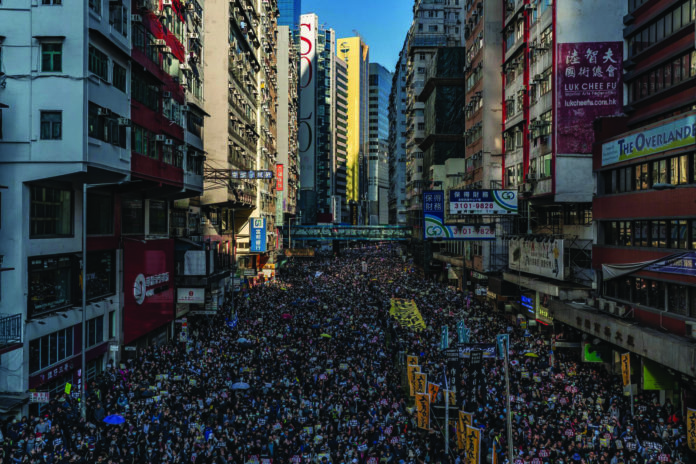 2019 marked a definite political turning point globally. Particularly in the final months, we have seen mass struggles and general strikes around the world with revolutionary characteristics. This is a mass explosion, a result of accumulated anger and discontent against those in power; their neoliberalism and lack of democracy. These protests have also featured some basic elements of a socialist struggle – most notably the strength of the working class and an instinctive internationalism.

At the same time, governments, dictators, and generals demonstrated that the ruling class will not step down voluntarily. In a number of countries, armed counter-revolution and brutal repression have been deployed against peaceful demonstrations and young activists.

Most governments around the world are silent about the violence of the counter-revolution, or are calling for “calm.” The news media talks about “violent clashes” between state forces and demonstrators. In fact, in every case “violence” means attacks by heavily armed counter-revolutionary state forces, while those protesters try to defend themselves. In Bolivia, more than 30 people have been killed by state forces in a two week period, eight of them in a massacre in El Alto on November 19.

For the key imperialist powers, these events are a sharp warning of the weaknesses of their global capitalist system. This wave of protests takes place at the same time as a sharp increase in inter-imperialist conflicts, a likely downturn in the world economy and a deepening climate crisis.

And the protests are still spreading. In late November, Iran and Colombia became the most recent arenas for mass protests. In Iran, following another drastic price hike on fuel, protests took place in over 100 cities. The economic burden on workers and the poor was immediately linked to the theocratic dictatorship. The “Supreme Leader” Khamenei went on television to condemn the protests, claiming the extra income from fuel price hikes was destined for the poorest. The response was increased anger, including burning pictures of Khamenei. More than 300 have been killed by state forces. In Colombia, the general strike on November 21, with 250,000 on street demonstrations, was followed by a second general strike on December 3, against privatizations and cuts in pensions. The state answered with a curfew in Bogota and a heavy police presence.

Now Macron in France is facing a massive strike wave against his regime’s attempt to undermine the pension system which is one of the key post-World War II gains of the French working class. This began on December 5, with up to 1.5 million marching in the streets. A strike wave is also developing in Finland.

Commentators have made historical comparisons with 1848 and 1968, when revolutionary and pre-revolutionary struggles spread to many countries. Comparisons have also been made with 2011, when a wave of revolutionary struggles in North Africa and the Middle East overthrew Mubarak in Egypt and Ben Ali in Tunisia. Now, nine years later, the wave of protests is not confined to one region, but global in scope, and with clearer social demands: for jobs, water, electricity etc.

Politically, the masses have also drawn conclusions that regime change is not enough. In Sudan, the lessons of the Egyptian revolution which ended with al-Sisi establishing a new dictatorship, have led the masses to continue their mobilizations after al-Bashir was overthrown.

Compared to 2011 and other protests in recent years, the struggles of 2019 are much more long-lasting. Protests in February in Haiti and June in Hong Kong are still ongoing. Lebanon’s “October revolution” forced Prime Minister Hariri to resign after two weeks, but has continued through his resignation. In mid-November, bank workers were on indefinite strike, roads were blocked around the country and state buildings were blocked by protests. Algeria has seen mass demonstrations every Friday, which did not stop after Bouteflika was forced to resign, with “New Revolution” as a frequently-used slogan.

Most of the protests have seen youth and women in leading roles, without question inspired by the youthful climate strikes and the global women’s and feminist movement. 7.6 million people participated in the climate strikes in September, with an increasing understanding about the need for a movement for drastic social change. The feminist strikes and movements also have an international character and make use of the strike as a weapon.

Where the working class has taken decisive action with general strikes and strike waves, the balance of forces have been made very clear – the isolated small elite versus the majority of workers and poor. This has also underlined the economic and collective role of the working class, the force that can achieve a socialist transformation of society.

The movements are combining many issues: economic hardship and lack of democracy with the  oppression of women and environmental degradation. This was made clear by the movement in Indonesia at the end of September. Student protests at over 300 universities were triggered by a bill making sex illegal outside of marriage, directed against LGBTQ+ people, but the protests also attacked corruption and the destruction of rain forests.

Bourgeois “experts” are unable to explain this global political moment. Bloomberg stresses that these are not working-class protests, but rather “consumers” reacting against a rise in the cost of fuel, taxes, or travel costs. This totally underestimates the strong political demands of the movements, although in most countries a strong, organized and unified workers’ movement remains to be built.

The Economist magazine says “The search for a unifying theme is pointless,” stating protests can be “more exciting and even more fun than the drudging daily life,” and warns that “solidarity becomes fashion.” This, of course, explains nothing: why do the protests takes place now and why do more people not always enjoys this kind of “fun”?

Marxists consider and analyze both the clear common denominators, the strengths and weaknesses of these movements, as well as the different forces of counter-revolution. Of course, there are national peculiarities, but also many common features.

What is Behind the Explosive Anger?

This is a global turning point, created by the deep political and economic crises of capitalism, its blind alleys and decay. Politically, we see the ruling class relying on right-wing populism and nationalism, in an increasingly parasitic economic system. They have no way out.

Who are these mass protests directed against? What is behind the explosive anger?

The struggles show many common and important features.

The movements have won big victories and concessions. Longstanding dictators in Sudan and Algeria have been overthrown, the government in Ecuador fled the capital, ministers have resigned in Lebanon, Chile, and Iraq. In Chile, President Pinera first claimed the country was “at war” against the protests, then had to “apologize” and reverse all the measures that initially triggered the movement. Similarly in France, Macron was forced to retreat on fuel prices and increase the minimum wage as a response to the “Yellow Vest” protests last year. In most cases, the protests have continued after these concessions.

Consciousness can take leaps forward based on the experience of struggles. This process has begun but, in the main, the mass struggles lack the organization and leadership necessary to point the way to the socialist transformation of society. No workers’ or left parties capable of this task have developed so far. The new left parties formed in the past period have been volatile and politically weak.

The comparisons with 1968 show how far the labor movement – workers parties and trade unions – has retreated in terms of its active base. However, this also means that Stalinist “communist” parties and social democracy have less possibilities to block and divert the struggles as they did back then.

This autumn has also shown that the capitalist class does not hesitate to use the most brutal counter-revolutionary repression in order to stay in power. They prefer other, more peaceful, means but are prepared to use violence when necessary.

In Bolivia, there was a military coup, with the support of U.S. imperialism and the Brazilian government under Bolsonaro. The new “president” Anez was “elected” by less than a third of parliament.

More than 300 have been killed and 15,000 wounded in Iraq in the last month.Two hundred eighty-five people have been shot in the eyes in Chile. In France in the spring, 40 people were blinded.

There is still a risk of a major clampdown by the Chinese army in Hong Kong, even if the many warnings of a new Tiananmen Square massacre have not materialized so far. Also, the risk of a return of sectarianism in Lebanon or Iraq is a real danger.

The ruling class – where they don’t seek to crush the movement by force – want to disarm the protests, and derail them into elections or negotiations. In Argentina, this was clearly the case when the Peronist populist candidates, Fernandez and Fernandez-Kirchner, won the elections recently. The masses’ main target was to oust Macri, the former big hope for capitalism in Latin America who presided over a new deep financial crisis. The new Peronist government, however, will not have a honeymoon since it will continue implementing the policies of the IMF.

In Sudan, official protest leaders signed a deal over the heads of the masses with the military about sharing power. This left the real power with general Hemeti and his notorious Janjaweed militia. Now there are growing protests again, against the deal and the generals.

However, in general the movement in this period will recover more quickly from defeats than in the past. Mass protests in Iran were crushed in 2009 and again in 2017, but returned again this year. The same has happened in Iraq, Zimbabwe, and Sudan. New protests also show that the dictatorship in Egypt is not stable.

Indefinite general strikes and mass movements of a revolutionary character raise the question of power. Which class should rule?

Most of the present struggles immediately challenge the power of the capitalist class. The counter-revolution is preparing itself for such struggles, but in recent months they found that their normal methods are insufficient to drive the masses back.

Another important historical comparison is with the first Russian revolution in 1905. The working class showed its strength and the Tsarist state hung on by a thread. A final confrontation was inevitable.

Leon Trotsky, one of the leaders of the workers in 1905, declared at his trial in 1906 that,  “to prepare for the inevitable insurrection… meant to us first and foremost, enlightening the people, explaining to them that open conflict was inevitable, that all that had been given to them would be taken away again, that only might can defend right, that powerful organization of the working class was necessary, that the enemy had to be met head on, that the struggle had to be continued to the end, that there was no other way.”

In 1905, despite the formation of the workers’ councils (soviets), the insufficient organization of the working class alongside the weakness of the struggle in the countryside, gave counter-revolution the upper hand. The experiences of 1905, however, laid the basis for the victory of the Russian Revolution of 1917. Today’s situation does not leave room for long periods of reaction with no struggle.

As the 2020s begin, we will without doubt see the wave of struggle spread to more countries and regions including “advanced” capitalist countries as it has now in France. Working people internationally will increasingly understanding that determined social struggle is the only way to achieve real change. Anti-capitalist and socialist ideas will be strengthened by the search for an alternative to austerity, oppression, and repression. However, the weakness of the left and workers’ organization inherited from the last period means that it will be a drawn-out process, with both leaps forward and set-backs.

The general lesson, however, is the same as in 1905 or 1968 – it is still a question of the need for a workers’ government to defend the gains a mass movement can win and to move decisively to achieve fundamental change.