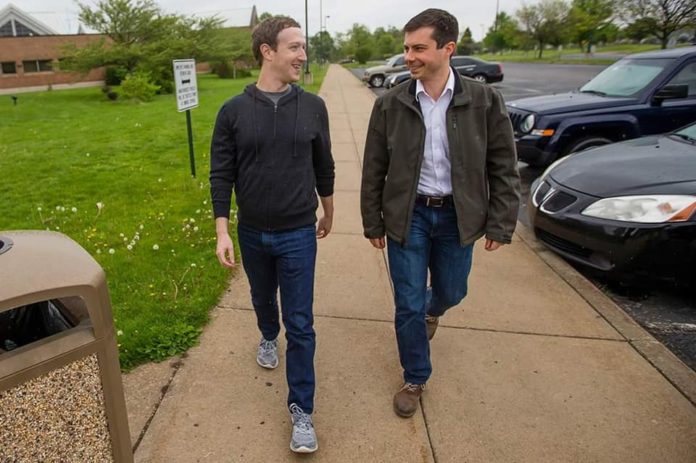 With under two months until the Iowa caucus, Pete Buttigieg has risen to the top of the polls there, according to the RealClearPolitics.com polling average. His backers hope a victory in Iowa and New Hampshire, where he closely trails Sanders, will propel the South Bend, Indiana, mayor into frontrunner status, wrecking Biden’s central appeal as the most “electable” candidate, and elevating Buttigieg into U.S. capitalism’s best hope against both Sanders and Trump.

As Democratic strategist Brad Bannon explained to Fortune: “Silicon Valley and Wall Street thought Biden was going to be the one to stop Warren or Sanders from being the nominee. Now, people like Zuckerberg are leading the way and they’re looking for a new moderate, business-friendly candidate because they don’t think Biden is going to make it to the finish line. In Buttigieg, they’ve found a young attractive rising candidate to be the anti-Warren.”

Buttigieg has outpaced Biden in fundraising by $15 million, fueled by small online donations and especially by Wall Street and Silicon Valley. Big Tech has given five times as much to Buttigieg as Biden. However, whether Mayor Pete can unseat Biden as the corporate establishment’s favored candidate, or defeat Sanders and Warren among Democratic primary voters, remains far from certain.

“I have never been part of the Washington establishment,” Mayor Pete declared, aiming to undercut John Kerry’s early December endorsement of Biden. At the core of Buttigieg’s appeal is his image as a pragmatic, progressive outsider, with a personal profile that ticks a bunch of boxes. As a 37-year-old gay veteran Harvard-educated mayor of a small mid-western city, his backers have packaged him as a “transformational candidate” who can inspire young people like Bernie and defeat Trump among white workers in the heartland.

When knocking doors for Kshama Sawant’s re-election in Seattle’s historically black Central District neighborhood back in September, I was surprised by a conversation with a 16 year-old supporter.

“So who are you supporting for president,” he asked. “Bernie,” I said, adding: “Like Kshama, he’s fighting for things like taxing the rich to fund affordable housing and a Green New Deal. He understands we need to build mass movements of regular people to win real change.”

“I like Kshama, but I think Bernie’s too old,” he said. “I’m supporting Buttigieg.” His mom, a middle-aged Black women who had invited me in for a conversation on the local election, was visibly annoyed at her son’s interjection. “You shouldn’t judge people by their age,” she shot back.

Sanders retains a significant lead in the polls over Buttigieg among both young people and African Americans. Yet there is widespread confusion about Buttigieg and, more broady, about the root causes of our deep social problems. We’re in a political moment where mass appeal for the “OK Boomer” meme overlaps with polls showing 70% of millennials would vote for a socialist.

More flexible strategists of U.S. capitalism hope these contradictions can be exploited to cynically tap into generational resentments, and other shallow appeals to identity, to build a winning electoral coalition for a thoroughly pro-corporate candidate like Buttigieg. At the same time, as Buttigieg faces greater scrutiny as a potential frontrunner, the half-hidden reasons he’s become a darling among wealthy elites will increasingly repulse millions of politically conscious workers, young people, and progressive-minded voters.

Already, facing mounting pressure, Buttigieg’s been forced to open previously private fundraisers to the media, disclose the identities of his big-money bundlers, and release the names of his clients when he worked for McKinsey, a secretive consulting firm with deep ties to the U.S. security state, dictatorships abroad, and big business.

After this news broke, #WallStreetPete and #RefundPete began trending as many of his early small donors, now realizing his claims to progressivism were fake, asked for refunds. As a Politico headline put it, “The left nukes Buttigieg” for his role at McKinsey, helping to engineer austerity measures and layoffs at the US Postal Service and Blue Cross Blue Shield.

In an election where Sanders in particular, but also Elizabeth Warren, have forced a discussion on what genuine progressive policy looks like, Buttigieg has carefully positioned himself as a reliable corporate centrist, just a few degrees left of Biden.

In a TV ad attacking the popular proposal for universal free public college from Sanders, Buttigieg says: “I only want to make promises that we can keep.” This is code for limiting policies to what is acceptable to the corporate establishment, which still dominates Congress and most U.S. political institutions. Not naive to this reality, Sanders correctly links his call for tuition-free college and student loan forgiveness, among his other demands, to the need for mass movements and a broader political revolution.

Buttigieg’s alternative proposal is to means test students, only waving tuition for families making under $100,000. On the surface this appears like a solution to the debt crisis for most working class students. But the history of means testing for social benefits is a history of bureaucratic obstacles intentionally designed to deny benefits to many. Just ask the teachers, social workers, and others who were promised student loan forgiveness for taking public service jobs only to find out – a decade later! – that hidden hurdles built into the program mean 99% of applicants are being denied.

The same problems plague Buttigieg’s deceptively named “Medicare for All Who Want It” plan. It is essentially similar to Biden’s plan, which centers around a public option which would compete with private insurance for customers. By leaving the for-profit medical system intact, this plan would do little to address the out-of-control costs that have Americans spending twice as much for medical care as most countries with single-payer systems. Yet winning even this limited reform would require an all-out fight with the powerful insurance industry, something Buttigieg has shown no appetite for.

Biden’s backers and media commentators attack Buttigieg’s electability by pointing to his terrible polling numbers among African Americans. But these attacks have a real basis. Protests erupted against how Mayor Pete and his South Bend, Indiana, police chief handled the case of a white officer shooting down Eric Logan, a 54-year old black man, following years of racially biased police violence there which Buttigieg ignored.

More recently, Buggigieg has come under fire for clumsily comparing his experience as a gay man to the oppression faced by Black people. While genuine solidarity between working class and oppressed communities should be welcomed, Buttigieg’s cynical attempt to leverage his personal identity fell flat because he is still, at the same time, defending the neo-liberal politics responsible for the systemic racism, poverty, and police violence plaguing black communities.

As Keeanga-Yamahtta Taylor wrote in her New York Times opinion piece: “The leadership of the Democratic Party regularly preaches that moderation and pragmatism can appeal to “centrist” Democrats as well as Republicans skeptical of Mr. Trump. It is remarkable that this strategy still has legs after its spectacular failure for Hillary Clinton in 2016… offering watered-down versions of what has made Mr. Sanders a household name will not motivate those who do not typically vote or angry voters who recoil at the cynicism of calculating politicians” (12/10/19).

This is why Buttigieg’s boosters are dead wrong when they argue that his identity as a young, mid-western, gay veteran will be enough to inspire and turnout the Democrats’ leftward trending base to defeat Trump. Most young voters – including a majority of black millennials and women under 45 – are backing Sanders because they understand that winning real change will be far easier with an “organizer-in-chief” in the White House rather than another progressive faker who owes their career to big business.