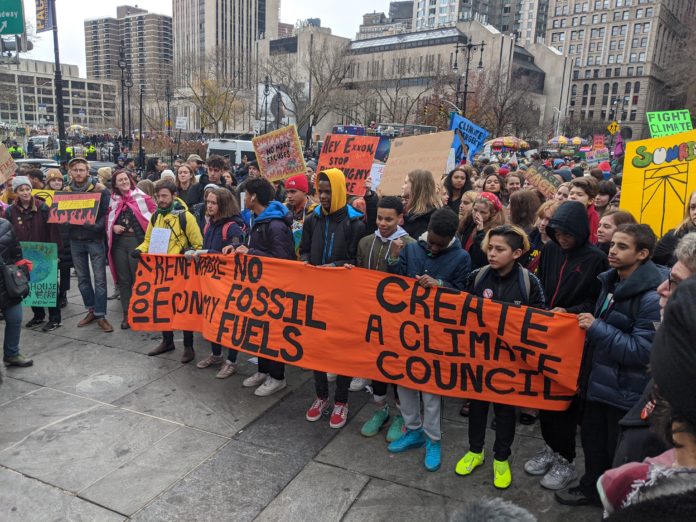 Collins Dictionary has declared “climate strike” as the word of 2019. It’s no surprise considering that millions of people, overwhelmingly young, have participated worldwide in the various climate strikes. The recent November 29 – December 6 strikes had smaller attendance than the millions who participated in September, but the determination has remained strong.

Teenagers are leading and organizing this movement worldwide. While far more resources were poured into national organizing in September, the November-December strike was significant for the breadth of actions that took place. There were demonstrations in nearly every city in the U.S. – from Eugene, Oregon to Gainesville, Florida, and from Boston to Los Angeles. At the protest in Des Moines, Iowa, Bernie Sanders was welcomed to the stage as the only candidate that young climate strikers see as willing to take immediate action.

The mood at the November-December climate strikes was determined, but struck desperate notes. While pointing out that climate change is a fact and bemoaning the current president’s denial of it, the urgency of action was central. Youth everywhere are ravenously searching for ideas and methods that can succeed where the status quo has not. They are increasingly impatient toward the U.S. two-party system and politics as usual.

While young people’s rejection of business as usual was evident everywhere, there were many different ideas for how exactly to fight this polluting capitalist system. Some teenagers addressed their peers as “future voters,” others extolled the benefits of recycling and lifestyle changes. It’s true that young voters are further to the left than older voters, as we’ve seen with Bernie Sanders’ overwhelming youth support, but the bigger question for voting is having candidates and a party that will fight with everything it has against further climate change – which is the least that’s needed. Neither corporate political party fits that bill. Similarly, while individuals can live “greener” lifestyles, the vast majority of pollution and emissions come from big business, and taking fewer showers will not change that. We have to put forward the idea that we can’t control what we don’t own and, as part of a Green New Deal, we should be taking energy companies into public ownership so that we can retool them to end the use of fossil fuels.

The search for new ideas has led to putting demands on all levels of governments, shaming corporations and banks, calling for a Green New Deal, and a relentless criticism of all who pay lip service to the movement. It is no surprise then that the leaders of the U.S. Youth Climate Strike have stepped forward and endorsed Bernie Sanders, citing his Green New Deal plans and his insistence on starting immediately.

In New York City, nearly one thousand high school students marched around City Hall demanding that the city council take environmental action. Afterwards they spoke about the need for action and to get organized. At the end of their rally, Senator Chuck Schumer spoke, getting a skeptical response that included a portion of the crowd chanting “Green New Deal” during his speech. This is just a further example of the audacity epitomized by teenagers like Greta Thunberg and many others, and their unwillingness to accept the normal platitudes of corporate politicians in the Democratic or Republican Parties.

To win a future in which a just transition to renewable energy and a Green New Deal saves the planet for humanity, further steps must be taken. The next climate strike is planned for Earth Day in April, but we can’t wait that long – further demonstrations should be called nationally and internationally, linking up with organized labor and calling on them to take real action.