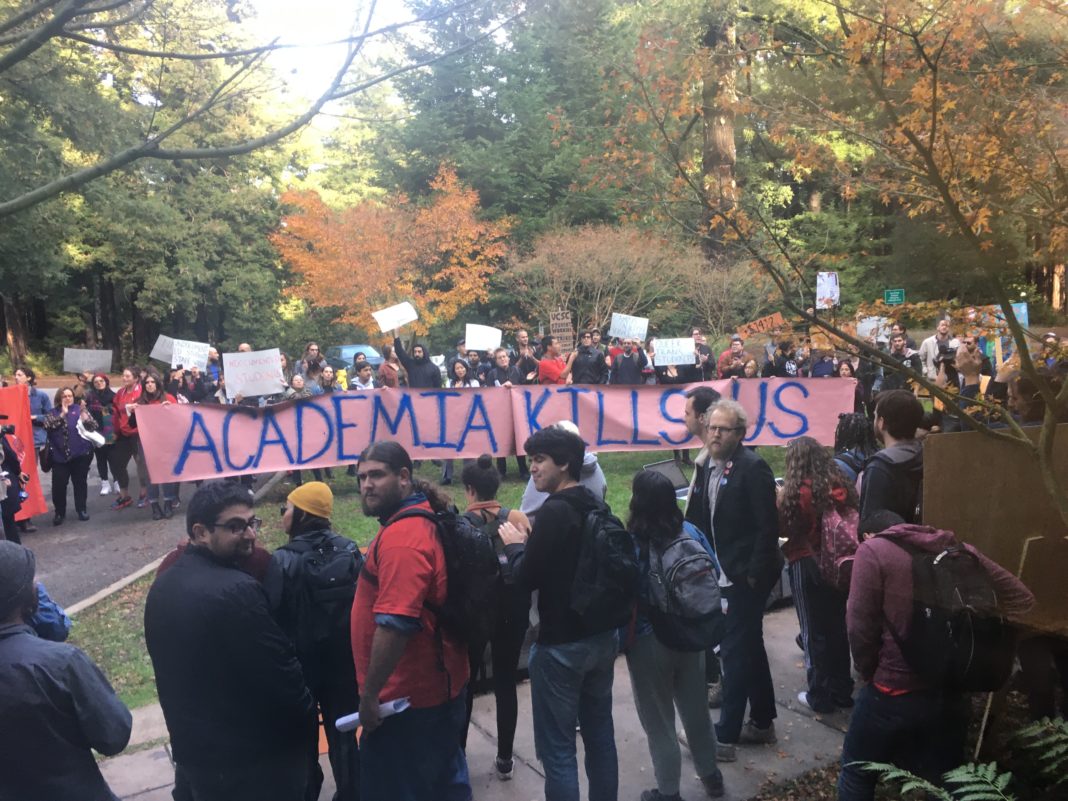 Last week, 250 UC Santa Cruz grad student workers, many of whom are members of the statewide University of California student workers’ union, UAW 2865, packed into a General Assembly meeting that was bigger than most official union meetings in recent memory. Student teachers are fed up with sleeping in their cars and fed up with an administration that just doesn’t care. The room overwhelmingly supported a wildcat strike, as did 65% of Santa Cruz union members in an online ballot.

Working people, labor unions, and housing activists should join together to support the incredible courage and resolution of our sisters, brothers, and siblings at UC Santa Cruz and we urge everyone to donate to their strike fund.

The union’s statewide contract, rushed through by leadership in the summer of 2018, has left students stuck between a rock and a hard place. Low pay is deadly in Santa Cruz, a coastal town where there are few rental units, and none that are affordable. Across California it was Santa Cruz UAW members that voted by the largest margin against the mediocre contract that passed.

During the 2018 contract discussion, Socialist Alternative UAW members pushed for a monthly housing stipend of $500; this was deemed unrealistic by conservatives in the union. Santa Cruz strikers, looking realistically at the cost of living in their town, have decided to fight for a $1,412 per month cost of living adjustment (COLA). Workers decided the best way to get what they need is to wildcat, set up picket lines, and to withhold grades. No one knows how long this rank-and-file uprising will last, but the desire to end student teacher homelessness is the top priority.

The UC Santa Cruz administration has put out an appeal to professors to rent rooms to grad students, potentially making your boss into your landlord. This is not good enough. Faculty recognize this too, as shown by the Santa Cruz Faculty Association coming out in support of the students’ COLA demand. At Berkeley, UC claims to address the crisis by building more housing, then charges more in rent than graduate student instructors are paid per month! California is rolling in cash and rolling in billionaires, yet UAW members are living in vans. To drive this movement forward, other campuses – especially at UC, but also nationwide – will need to plan solidarity actions, including more strikes.

Working people, labor unions, and housing activists should join together to support the incredible courage and resolution of our sisters, brothers, and siblings at UC Santa Cruz and we urge everyone to donate to their strike fund.