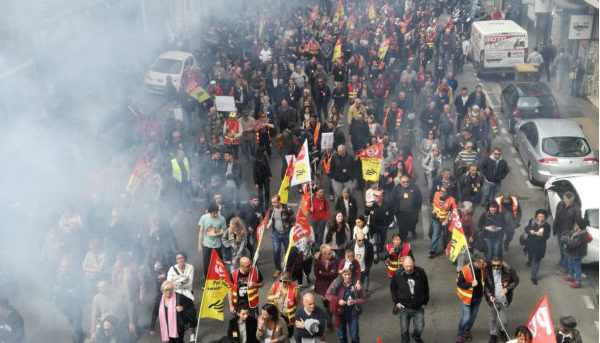 According to an IFOP survey, 64% of French people believe that the general strike of Thursday, December 5 is justified. President Macron’s pension reform is going badly. The list of sectors calling for a strike has grown steadily (railway workers at SNCF, transport workers at RATP, air traffic controllers, transport, energy company EDF, students, the education sector, postal workers, care workers, police, media,…). This day of action comes three months before local elections in a political landscape where the traditional parties are in ruins.

It has been a year since the yellow vest movement began. A movement of unprecedented duration that illustrated the extent of the anger in society. A movement that also represented the first steps in the rebirth of large-scale class consciousness. The protest movement against the pension reform is a direct extension of this.

As Adrien Quatennens, Member of Parliament for left formation France Insoumise, explains, the situation in France is one of “social anger that goes beyond the question of pensions.” Society is cracking everywhere and the authorities are no longer doing much to close the gaps. This week again, a report from the daily paper Le Monde highlighted the explosion in the number of homeless mothers. This came while we were still in shock at the self-immolation of a student who had just lost his scholarship last November. Such acts of desperation speak volumes about Macron’s France, the France of the rich, the France of injustice.

Workers in many sectors have been struggling in recent months and have tried to respond. There were, for example, the protests of the health care workers. There also was an impressive participation in the demonstrations of November 23, in the run-up to the international day of protest against violence against women. Women, once again, will be most directly affected by the attacks contained in the pension reform.

What does the pension reform contain?

The government wants to extend the period in which workers need to contribute before they are entitled to a full pension. Pensions will be reduced by establishing a pension system with points. The government also argues for the abolition of “special regimes”. It plays the card of ‘equality’: those workers like teachers or railway workers who still have better pension rights are presented as privileged. When Macron talks about equality, he means all workers should get less.

A truly egalitarian policy would of course mean that the best pension plans become the norm for all workers. This is not possible without going where the money is: in the pockets of the big capitalists of the biggest companies, the CAC40 shareholders. In 2018, the companies in the CAC40 made no less than €100 billion in profits!

Labor productivity has increased significantly in recent decades: we produce more, with fewer workers. It is not true to say that pensions are unaffordable: there has never been more wealth than today. We must organize against the theft of the fruits of our labor! In the end, the mass struggle is not only about pensions, it has the potential to start to challenge a society where the levers of the economy are in the hands of a tiny minority. We must demand the nationalization of the key sectors of the economy (banking and finance, energy, metallurgy, communication,…) and their democratic management and control by workers and the community. This is the only way to be able to collectively plan what is socially and ecologically necessary for the entire working class.

Building unity against the enemy

The call for the strike on December 5 gives the opportunity to bring together the anger present throughout society in a generalized struggle. A majority of trade union organizations are calling for action against the pension reform, while some trade unions, such as those at the Paris public transport (RATP) and the railway company SNCF, have made this day the starting point for a ‘renewable’ (indefinite) strike.

If the labor movement uses its power in the production process, it is able to play a key role in the struggle for real system change. The strike of December 5 must be considered as a step towards the organization of a real general strike, that blocks the entire economy of the country. Such a show of strength would not only hit the capitalists where it hurts them the most, in their profits, but it would also clarify that it is the workers who produce the wealth and that without them, nothing functions.

On the basis of this confidence, and the enthusiasm created by the current international context of mass struggle, it would be possible to direct the movement against capitalism itself, to overthrow it, and to lay the foundations for an economy centered on the interests of all workers, a democratic socialist economy, where the key sectors of the economy are democratically controlled and managed by the workers and their families.