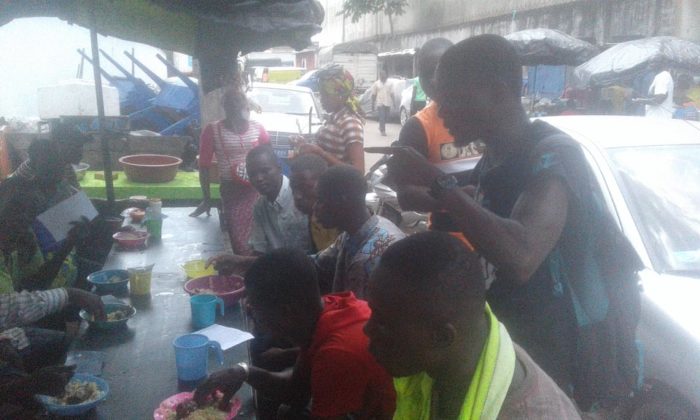 Militant Côte d’Ivoire is calling for solidarity with workers at the SCCI (Société pour le Compoundage en Côte d’Ivoire), a chemical factory in Vridi industrial zone (in Abidjan, the country’s capital) in their struggle over a bonus that was owed by their boss but never got paid – and against the reprisals they have suffered as a result of their strike action.

The workers organized one day of strike, and as a result 35 of them are threatened with the sack with no rights, as the strike was judged “illegal” (they did give a warning letter to the “labour delegates” in the factory, but they failed to forward it to the boss, or so it seems). This includes some workers who had been working there for more than 20 years. Of course, it is just scapegoating – others might be threatened later if the boss gets his way.

The workers called on Militant Côte d’Ivoire and the CWI for assistance. A series of meetings already happened in Vridi, and a thousand leaflets have been distributed by our group, not counting those shared by the workers themselves.

A victory in this struggle could be an important step towards the plans for building a workers’ association in Vridi industrial zone – a dense factory area established in Africa’s second biggest harbor (after Durban).

We call on workers, socialists and left and union activists across the world to phone the company’s management in defense of the unjustly sacked workers and to demand justice for their right to get their due bonuses and wages, as well as the full hiring of the precarious “daily” workers. You can also write a letter of protest and send it to this e-mail address : contact@scci.ci. A model letter of protest can be found below.

I am contacting you because your workers went on a strike for one day in protest against the non-payment of bonuses that had been promised to them, and it is my understanding that in retaliation for this action you have threatened them with being fired, despite the fact that this was a legal strike in which they had informed their union delegates prior to the action, and despite the fact that some of these workers have given you more than 20 years of service in your factory.

I have also been informed that you are now demanding that these workers pay you a fine of 6 months’ wages, allegedly to reimburse you for the profits you lost during this one day strike. In other words, you are attempting to impose six months of forced labor on these workers, as a punishment for standing up for their rights to get paid for their labor.

This is a form of debt bondage which violates international labor standards, as laid down in the 1919 Treaty of Versailles and in the statutes and policies of the United Nations and the International Labor Organization. It also violates the labor laws of your country.

I demand that you immediately withdraw this threat, which I understand some workers signed under duress – the threat of dismissal – and that you pay all of the workers the bonuses that they were owed, as well as a day’s pay to recompense them for the fact that they had to go on strike in order to get the wages that you owed them.