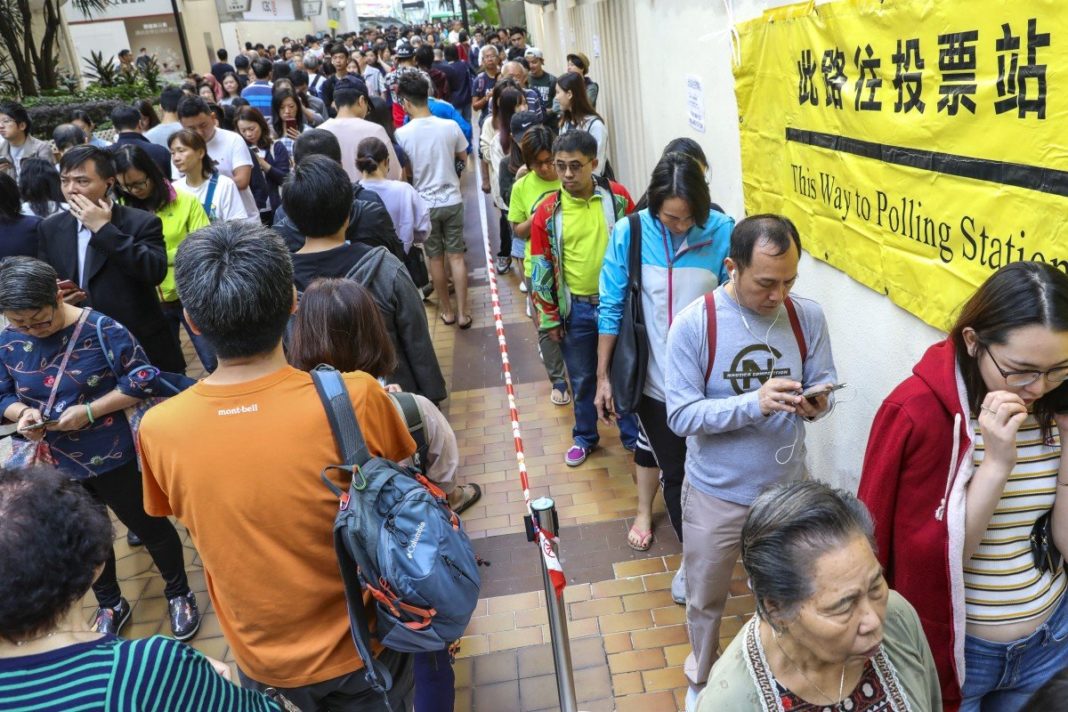 The District Council elections held on Sunday November 24 were a huge victory for the anti-authoritarian protest movement which began in June. Without the mass protests, which have raged continuously for almost six months, it is clear that this mother-of-all-landslides wouldn’t have happened.

5,000 protesters have been arrested in the course of the struggle so far, around one-third of them under 18 years of age. Police brutality has been a main driver of the protests, with thousands hospitalized and three youngsters, one a 14-year-old, shot with live ammunition as the level of police violence has been ramped up in recent weeks.

The final count in the district council elections is 388 seats (up from 126) for the pro-democracy opposition and 59 (down from 298) for the pro-Beijing camp. This means the pan-democrats and other opposition candidates won almost 90% of the seats thanks to a first-past-the-post election system. Their share of the vote was 60% compared to 40% for the pro-government camp.

The turnout was a record-breaking 71.2%, which dwarfs the turnout of 58% in the last elections to the Legislative Council (Legco) in 2016, which itself was a record. Compared to the last district council elections in 2015, when the turnout was 47%, almost twice as many people voted – 2.94 million (2019) compared to 1.47 million (2015). Queues formed outside many of the 600 voting stations up to an hour before they opened. Many youth were among the early voters in a complete turnaround from previous years.

Hong Kong is not a democracy; its political system allows elections for the district councils, which are the lowest level of government, and for half the seats in the Legco where the pro-government side have an in-built majority thanks to rigged so-called functional constituencies reserved mostly for Big Business. The government, headed by a Beijing-approved Chief Executive, cannot be elected.

The bourgeois pan-democratic leaders are probably just as surprised as anyone: They go from controlling zero councils to controlling 17 of 18. Only the Islands District (Lantau), where eight of 18 seats are not elected but appointed, is still controlled by the pro-government camp. Three district councils have gone from pro-Beijing control to not a single pro-Beijing councilor elected (Sai Kung, Tai Po and Wong Tai Sin). The latter is a working class district where local residents have clashed several times with police and protested about police brutality and heavy use of tear gas during the past months.

The district councils are not very important bodies, relatively powerless. There has been a strong conservative tradition to depoliticize these elections, only focusing on “local issues”. This has always favored the pro-government camp who wield huge financial resources. They can mobilize “block votes” using patronage systems and bribery, and through their domination of traditional networks such as cultural societies with links to mainland China.

But this year the “non political” tradition of these elections was blasted aside by an unprecedented mood of militancy. The vote became a de facto referendum on support either for the anti-government protests or the government’s increasingly brutal crackdown. The results leave no doubt where the majority of Hong Kongers stand. For the government, the pro-Beijing capitalist establishment and Xi Jinping’s dictatorial regime this is a humiliating setback.

It also raises new complications for the government and the CCP in attempting to bring the political crisis to an end. Following the CCP’s keynote Fourth Plenum meeting in late October, it was clear that Beijing was exerting pressure on the Hong Kong government and the police – Beijing’s extended arm – to deal more ruthlessly with the mainly youthful protesters. Plans were in the pipeline for a local variant of “June 4” – the 1989 massacre in Beijing – perhaps using less lethal methods but aiming to achieve a similarly shocking and forceful end to the protests. This plan is no longer possible in the short-term.

Furthermore, the CCP has now given itself a new problem. Under Hong Kong’s rigged small circle election system, in which just 1,194 electors chose the Chief Executive, the district councils wield almost 10% of the votes. Previously these 117 votes were controlled by the pro-Beijing camp under a winner-takes-all system. Now the pan-democrats control all 117 votes. This can cause further complications for Beijing in micro-managing these “elections” next time – which, according to some rumors could be in 2020, if there is a plan to terminate Carrie Lam and replace her with a “new” less hated establishment face.

The past six months of mass struggle has seen multiple miscalculations by the government, starting with the now withdrawn extradition law. Carrie Lam, the walking-disaster of a Chief Executive, confessed her “mistakes” have caused “huge havoc”. After the district council election debacle, Lam says she will “seriously reflect” on the message this sends. Nobody should hold their breath! Banned by the Chinese dictatorship from making any significant political retreats, Lam’s government has become a “great destabilizer” – enraging the populace with its brutality and arrogance.

Xi’s regime fears that any weakness or readiness to make concessions in Hong Kong will encourage the mainland masses to organize and raise their own demands to deal with multiple grievances. The grievances of Chinese workers and youth read like a checklist of Hong Kong’s own problems: low pay, precarious jobs, inhuman working hours, unaffordable housing, suffocating pollution and a dictatorial regime that persecutes all opposition.

The decision to proceed with the district council elections looks like yet another monster miscalculation by Carrie Lam’s government and its support parties. Up until the very last moment they were deliberating whether to cancel the elections (a de facto coup) but decided to go ahead fearing cancellation could trigger new sympathy for the protest movement and increased international pressure. They counted on a bad result, but nothing on this scale.

The pro-government bloc surpassed itself with a huge mobilization of its voter base, receiving 1.17 million votes in total. This is 330,000 more votes than it got in the previous district council elections, when the total number of voters was only 1.47 million. Clearly it was the record voter turnout that was the key to their rout. Now, predictably, there is a queue of pro-government “losers” condemning Carrie Lam for costing them their political positions and creating the biggest crisis in the camp since the Chinese takeover in 1997.

The main pro-Beijing party DAB (Democratic Alliance for the Betterment and Progress of Hong Kong) was decimated, winning just 21 seats compared to 119 in the previous election. Its leader Starry Lee offered to resign but was persuaded to stay on because nobody wants the job. The FTU (Federation of Trade Unions) won just 4 seats, down from the 27 it won in 2015, meaning it is no longer the second largest party in the pro-Beijing camp, being pipped by the tiny Liberal Party on 5 seats.

This result is a crushing blow to the government and a serious setback for the CCP regime. It will also have repercussions inside China, both on the ground and in the intra-regime power struggle. Beijing’s nationalist anti-democratic anti-Hong Kong chauvinist propaganda has always claimed the anti-government protests were only supported by a minority. The best internet censorship in the world will not keep these election results from penetrating and becoming known in China, which can significantly undermine the state’s propaganda against the movement.

But there are other factors that could play into the regime’s hands in trying to regain control of the situation. A section of the pan-democratic leaders will be susceptible to pressure from the regime and the capitalists to deescalate the protest movement. The biggest election winner within the pan-democratic bloc is the Democratic Party, with 91 seats (up from 43 last time). This party has a history of entering into backroom deals with the representatives of the CCP and applying the brakes to the struggle for democratic rights.

Indicating how the Democratic Party sees its new larger role, its chairperson Wu Chi-wai said, “The split in society has to be carefully handled.” There is a real danger that the pan-democratic compromise politicians – largely marginalized by the mass struggle to date – will try to use their enhanced positions from the elections to claim a bigger influence, urging a shift away from mass action (of any kind) to “negotiations”. The movement can only guard against this threat, which would mean a return to the failed approach and leadership strategy of previous struggles, if there is democratic organization of the struggle at grassroots level, as we explain below.

Step up the struggle

The Hong Kong mass movement needs to step up and press home the political advantage these elections have delivered – a giant injection of new energy. To defeat the Chinese dictatorship, which is the only way to win the movement’s five demands and end authoritarian rule in Hong Kong, a Hong Kong-only movement is not enough.

The struggle needs to spread to mainland China by linking up with the oppressed workers and youth – a force the CCP fears more than anything – and also by appealing for solidarity around the world. This means solidarity from ordinary working people and especially those fighting similar oppression in heroic mass struggles from Chile to Catalonia to Iran. It does not mean placing hopes in Trump or other right-wing capitalist politicians in the US or Europe, whose attitude to China and Hong Kong is dictated by trade and business deals rather than democratic rights. That route is the fast-lane to betrayal and defeat.

Hong Kong’s stunning election tsunami is an opportunity to reboot the mass struggle, which is badly in need of a change of direction in order to win. The struggle has to be based on the working class as the most effective social force to paralyze and overthrow an authoritarian regime. Building democratic committees – in workplaces, schools and local communities – to organize the movement more solidly and effectively is also a top priority.

This poses the need for a new political approach to link the democratic struggle with the struggle for the rights of workers and the poor, because one cannot win without the other. It means expanding the five demands to incorporate the needs of workers and the younger generation: for an emergency house-building program to build 100,000 public housing units per year, dramatic increases in wages, a universal pensions system and 8-hour work day.

Break the power of the billionaires

These demands have always been resisted by the capitalist tycoons whose interests the authoritarian government serves. We want the right to elect a government, by universal suffrage from 16-years of age, but we also need to take democratic control over the big companies and banks, which are blocking all social progress and concentrating society’s wealth in the hands of a tiny elite – to a greater extent than almost any other economy in the world. A recent study shows Hong Kong’s 50 richest billionaires have a combined wealth of 300 billion US dollars (Hong Kong’s GDP is 362 billion US dollars). The super-profits of the Hong Kong tycoons are made possible by the authoritarian system in Hong Kong and China.

Those who agree with these proposals to upgrade the anti-authoritarian struggle should join Socialist Action, the CWI* in Hong Kong. We are campaigning for a new working class party to be formed, uniting all oppressed layers in the struggle against capitalism and dictatorship, in Hong Kong, China and globally.

*The CWI (Committee for a Workers’ International) is a revolutionary socialist organisation with parties and groups in more than 30 countries.