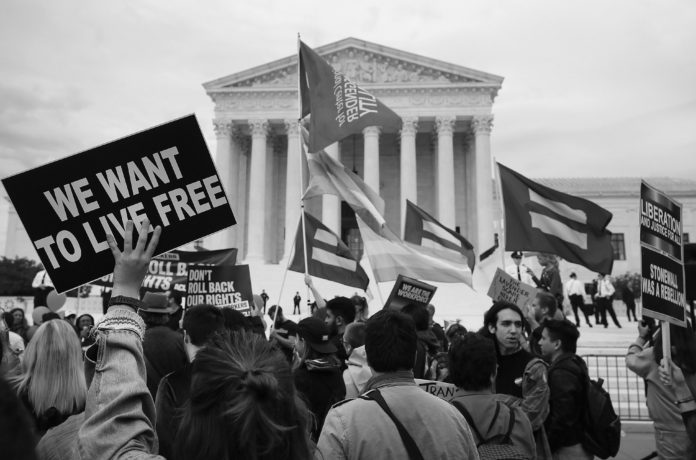 LGBTQ activists rallied outside the U.S. Supreme Court on Tuesday, October 8 while the Court heard a trio of landmark cases on LGBTQ discrimination, Altitude Express Inc. v. Zarda, Bostock v. Clayton County, and Harris Funeral Homes v. EEOC.
All three cases involve employees fired from their jobs for being gay or transgender. The Court will decide whether existing U.S. anti-discrimination laws apply to discrimination on the basis of sexual orientation and gender identity.

If the conservative Court rules in favor of the employers, there will be far reaching implications for all workers. A loss for the plaintiffs will be disastrous and a blatant handover of power to the bosses. While the cases themselves deal with employment, Supreme Court decisions affect courts across the country. This precedent could effectively give the green light to intensified discrimination in housing, health care, education, and credit.

Only 22 states outlaw firing employees for being gay, and only 21 states for being transgender. In other words, in over half the country, LGBTQ people currently have no protections at work. Meanwhile the other half, with millions of people, could lose their legal protections as a result of the new ruling. The effects would be devastating, especially given the fact that in the U.S. workers lose their health insurance when they are fired.

The stakes are higher for trans and nonbinary workers who would find it harder to find stable employment and face an increasingly stressful and dangerous workplace. In the 2011 National Transgender Discrimination Survey, one-quarter of trans workers reported they had lost a job due to gender-based discrimination, and a stunning 90% reported harrassment and mistreatment at work. The LGBTQ working class, who are disproportionately low-income and housing insecure, could now be burdened with the additional stress of having to look, act, and speak feminine or masculine enough or potentially be fired.

Corporations happily exploit changed social attitudes to rake in millions on Pride marketing, while on a broader scale paying their workers poverty wages, denying benefits, and fighting tooth and nail to avoid paying their fair share in taxes.

More Power to the Bosses

The impact of these decisions will absolutely extend to all workers whether or not they are LGBTQ. To decide against the employees would significantly weaken the 30-year-old rule against gender stereotyping, upending the entire legal basis for banning sex discrimination at work. All workers regardless of sexuality and gender will be less secure in their jobs if they can be fired for failing to conform to their boss’ gender stereotypes. Women in particular are already unfairly burdened by dress codes in school and the workplace, and individual choices like wearing pants instead of skirts or having a short hairstyle could be held against them if the Court rules against the plaintiffs.

These cases arise in the context of an onslaught of anti-worker decisions that make the union-busting role of the courts increasingly clear. Last year Janus v. AFSCME outlawed fair share agreements in public sector unions, serving a monumental defeat to the labor movement. Epic Systems v. Lewis ruled that employer contracts can bar their workers from collective arbitration. Now, the upcoming decisions could pave the way for bosses to single out workers for their identities and further engage in divide-and-conquer tactics.

Labor Must Fight Back

Unions need to urgently take up this fight against workplace discrimination. Whether queer or straight, trans or cisgender, no worker should have their gender presentation, dress and behavior unnecessarily policed by their boss. Statements of support and solidarity rallies from unions could help send a clear message that the labor movement supports trans workers’ right to transition and the right of all LGBTQ workers to be out of the closet.

We are up against an unelected body of justices wielding enormous power over our lives and punching down on the most marginalized. In recent years activists have seen the courts let off killer cops, indict peaceful protesters, and continually raise threats against Roe v. Wade and reproductive rights. The capitalist legal system is not designed to protect working people and the oppressed.

The fight for Roe v. Wade and marriage equality show that the courts, even when overwhelmingly conservative, can be pressured by a strong mass movement. Court decisions are not just a product of stale analysis of legal texts, but the outcome of a living political struggle. While not etched in stone, decisions can take years and even decades to be revisited. These crucial cases are a litmus test of our movement’s ability to organize sustained mass campaigns to fight off attacks.

The Struggle for LGBTQ Liberation

The LGBTQ community is facing a series of uphill battles against relentless assaults from the Trump administration and the right. Trans people have been in the crosshairs of hate mongering to pass “bathroom bills” at the state level for years.
On the other hand, there has been a revolution in social attitudes toward sexuality and gender, especially among youth. More than 90% of Americans believe gay and lesbian workers should have equal rights in job opportunities, according to a 2019 Gallup poll. More than half, rather than wanting to weaken existing laws, believe new civil rights laws are needed to reduce discrimination against lesbian, gay, bisexual, and transgender people.

Trump-appointed Supreme Court justice Neil Gorsuch expressed fear that ruling in favor of the LGBTQ plaintiffs would cause a “massive social upheaval.” Indeed, if this majority were to mobilize, it would create an unstoppable force that could lay the groundwork not only to defend the basic legal rights of the LGBTQ working class, but also to win important victories that can push the struggle forward.

Crucial tasks for this movement will be fighting for inclusive Medicare for All with full coverage for HIV prevention, hormone replacement therapy, and surgery; affordable housing for the 40% of homeless youth who are LGBTQ; and a federal $15 an hour minimum wage to raise the living standards of all low-wage workers. These accomplishments would be only the first major steps toward eradicating homophobia and transphobia once and for all.

The struggle for socialism is inextricably tied to LGBTQ liberation and the fight against oppression. A system built on the ability of the wealthiest minority to grow wealthier while the rest of us fight to survive is not a viable means for delivering real, material equality. We call for an end to this exploitative system and a total reorganization of society on a socialist basis, in which basic needs are met and no individual is denied a living because of their identity.