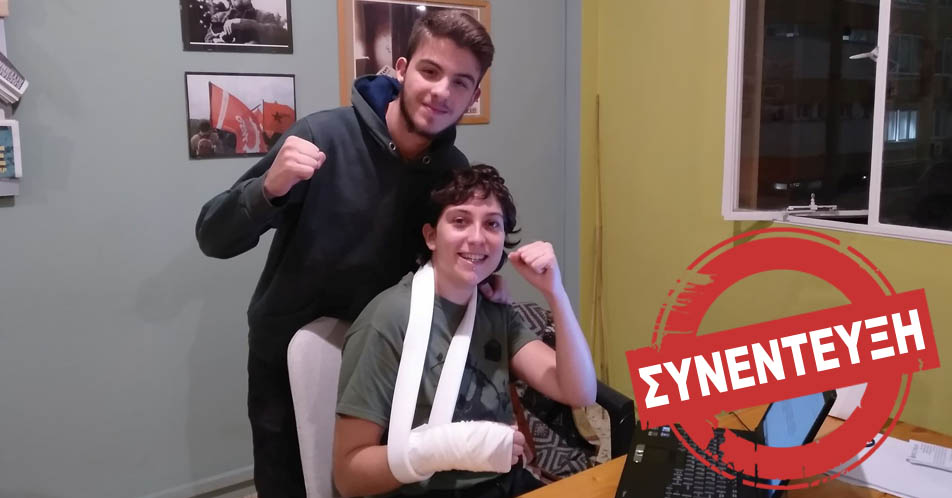 Solidarity campaign must be stepped up!

Two young members of Xekinima were arrested on Sunday night and are being accused of serious crimes.

In November 1973, Greek students occupied the Athens polytechnic in protest at the continued rule of the Greek military Junta. Although broken up by the army with many killed, the protest accelerated the process of the overthrow of the military regime one year later.

Each year since, demonstrations are held to commemorate this action, they are always mass protests. This year, they were bigger than the last few years, with 25.000 people demonstrating in Athens, 7.000 in Thessaloniki, and thousands in other Greek cities. They reflect the anger of the working class and especially the youth against the wave of repression and police brutality unleashed in the last months. Although the repression has inevitably scared some people, it has enraged a big part of society and is starting to lead them to the streets.

At the end of the peaceful demonstration in Athens, Irini Eminidou and Zisis Sourlas were walking in the area of Exarchia, going to the flat of a friend. Although the neighborhood was peaceful, Irini and Zisis were suddenly attacked by riot police from the notorious MAT forces and arrested.

Punching Zisis several times, they threw Irini on the ground, started kicking her head and crushing her arm under their boots many times. The riot cop was screaming “when you see MAT, you will kneel”.

Irini and Zisis were not the only people attacked by the riot police that night. More than a dozen other people in the same area that night were unjustifiably attacked, beaten and arrested.

Before they were taken to the police headquarters, the riot police took those arrested to a closed garage and photographed them in order to be able to “recognize” them, when the case goes to court. Irini, Zisis and others heard one riot policeman say “we are mistaken, it’s not them” and the officer in charge replying “the plan has changed. Its them”.

At the police headquarters the police took away the phones of all people arrested, refused them contact with their lawyers and their families for several hours. They stripped the women of their clothes, searching them in a humiliating way, in a room with the door open for everyone passing by to see. They also refused them water and they were not allowed to visit the bathroom for many hours.

About 5 hours after their arrest, the police informed the lawyer of Irini and Zisis that they were being charged with, among other things, possession of weapons, possession of explosives, arson, resisting arrest and inflicting serious injury on police officers. The “case” the police were trying to build was that Zisis, Irini and other people arrested in the area were a group of anarchists, who had attacked the police throwing Molotov cocktails, stones etc. The police, of course, had no evidence to back up these fake charges, but in Greece the police don’t bother with these kind of “details”.

The lack of evidence and the mass campaign of support that unfolded from the moment of the arrest of the comrades compelled the public prosecutor to reject the felony charges the police had tried to pin on the comrades and other people. However, he still charged them with the serious misdemeanor charges of “resisting arrest”, “intentional assault”, “causing bodily harm to police officers” and “verbal abuse towards police officers”. These charges are also completely false and fabricated and must be immediately dropped!

We therefore call for the international campaign of solidarity to be stepped up.  Details of what can you can do are found below.

Members of Xekinima have never participated in, nor used the methods of individual violent clashes with the police. On the contrary, we heavily criticize them. In numerous articles and political interventions, we have explained that these methods are alien to the mass movement, they are not helpful in building a movement, on the contrary they scare and repel working class people and at the same time they give the police a pretext to attack demonstrations and activists. Irini and Zisis have publicly defended this position in their universities and during mobilizations and movements many times.

In the last weeks, the police, under the instructions of the government, has unleashed a wave of repression and intimidation, especially against the youth.

The following incidents are only a small part of the wave of repression unleashed in the last month:

This wave of attacks is a response to the youth movements in Hong Kong, Chile, Catalonia, the Middle East and other parts of the world, which make the Greek bourgeois shiver with fear. They hope that by terrorizing the youth in this way, they will prevent a radical youth movement developing in Greece in the near future. They know that the Greek working class and youth movement has very militant traditions and although it is still suffering from the defeats of past years, it could reemerge to challenge their policies. After all, almost all New Democracy governments in Greece have been seriously challenged and often defeated by such mass movements.

The methods used against Irini, Zisis and other people have been used by the system in Greece before, in the recent past:

Methods will rebound on the government

The new right wing government of Kyriakos Mitsotakis thinks that by using these methods they can intimidate the youth, the working class, the poor and force them into retreat. They are mistaken. They are creating even more anger. This anger will eventually find its expression through class struggle and political organization. It will fuel the search for revolutionary ideas on how to change the world, to get rid of barbaric capitalism and replace it with a socialist society based on workers’ power and workers’ democracy.

How can you participate in the solidarity campaign.

To participate in the solidarity campaign for Irini Eminidou, Zisis Sourlas and other people unjustifiably attacked, arrested and charged with fake charges, you have two options:

1: Ask trade unions, human rights and left organizations, public figures to sign the attached Model protest letter, not forgetting to send one yourself, to the following e-mail addresses:

2: Donate to the campaign to help us cover the expenses.

Donations can be made by Paypal at http://net.xekinima.org/donate-paypal/ or by transferring money to the following account:

Drop all fake charges and end police fabrications against Irini Eminidou, Zisis Sourlas and other people in Greece.

On Sunday evening, 17th November, after the end of a 25.000 strong peaceful demonstration to celebrate the anniversary of the student uprising against the military Junta in 1973, university students, Irini Eminidou and Zisis Sourlas, were arrested by the riot police on their way to a friend’s house.

The riot police (MAT) attacked them unjustifiably. They punched Zisis several times and threw Irini on ground, kicked her, crushed her head and her arm under their boots. More than a dozen other people who happened to be passing through Exarchia square were also unjustifiably attacked and arrested by the riot police.

Before they were brought to the police headquarters, the people arrested were dragged into a nearby garage, where they were photographed so that the police could “recognize” them in court. At the police headquarters, Irini and Zisis were denied contact with their lawyer for many hours. Irini and other women were also denied water and a visit to the bathroom for many hours. They were stripped of their clothes to be searched in a humiliating way in a room with the door wide open. In addition, Irini was taken to hospital to have her injuries caused by the police attack treated only at the insistence of her lawyer.

The police have fabricated a “scenario” in which Irini and Zisis were part of a group of people that attacked the riot police with petrol bombs and stones. Their initial strategy, to pin heavy felony charges on them has already collapsed as there was no evidence to support the charges, and as a result of the mass campaign in support of Irini, Zisis and all youth who were unjustly attacked and arrested. However, they are still charged with misdemeanor charges of “resisting arrest”, “intentional assault”, “causing bodily harm to police officers” and “verbal abuse towards police officers”. These charges are also completely false and fabricated and must be immediately dropped!

Irini and Zisis are members of the left-wing organization Xekinima – Internationalist Socialist Organization. Xekinima is very well known in the Greek left, as well as to the police and its agents, for having repeatedly taken a position against the use of “urban guerrilla tactics”,  i.e. the actions of small groups or individuals who, among other things, attack police patrols with petrol bombs and often use rallies and demonstrations as cover. Such methods are of no use to the mass movement, on the contrary they undermine it. It is absolutely clear that Irene and Zisis did not, and could not, do any of the acts that the police have pinned on them.