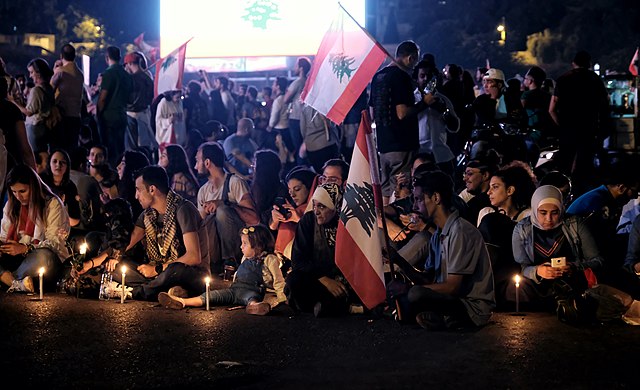 For nearly a month, October 17 uprising has been shaking Lebanon. This movement was born spontaneously following a series of additional taxes, including a tax on the WhatsApp free communication application.

Since the end of the civil war (1990), Lebanon has been a country ruled by parties that were heavily involved in the civil war. The leaders of most of these parties are former warlords, or their sons. The only fundamental difference between the parties is the religious group with which they are linked. This is strengthened by the Lebanese constitution, which bases the separation of powers and the Lebanese political regime on religious sectarianism. Seats in parliaments are allocated on the basis of representation for each religious community, as are other key positions (the President of the Republic is a Maronite Christian, the Chief of the Assembly is a Shia Muslim and the Prime Minister is a Sunni Muslim). Ostensibly, this exists to ease community tensions but, in reality, it serves to apply “divide and rule” for the benefit of the elite.

The October 17 uprising is the first movement in Lebanon’s contemporary history to undermine this sectarian division. Even if there have been various movements against the government in the past, they were always very partial and divided along sectarian lines. Now , for the first time, Maronite Christians, Orthodox, Sunni Muslims, Shiites and Druze are walking hand in hand in the streets against a common enemy: the government and all its corrupt allies.

A people under pressure, a disconnected elite

This development is the result of decades of neoliberal policies and austerity leading to under-investment in public services while a high tax burden is maintained on the poorest segments of the population. In recent years, following their inability to form a government coalition, the various political parties have been represented in a kind of “national unity” government, led by Saad Hariri. Since the 2008 economic crisis that hit Lebanon hard, and the political crisis and conflict with Saudi Arabia in 2017, government income fell drastically. This led the government to raise taxes and cut spending. Thus, in 2019, the government announced the country’s worst ever austerity program, to limit the public deficit. This included an increase in tobacco taxes and the famous WhatsApp tax, a measure that “broke the camel’s back”.

On October 17, thousands of people began to take to the streets to protest against this new tax. This number grew very rapidly, reaching nearly 2 million people in a country with less than 6 million people (a large part of whom are Syrian and Palestinian refugees).

The government reacted very quickly, withdrawing the taxes it had announced, but the fuse was already lit. The movement had already adopted more radical demands, namely the resignation of the government and the end of the existing sectarian political system in Lebanon.

Since then, the Prime Minister has resigned and religious leaders of the various communities are calling for the immediate formation of a new government. This shows how hard the elites are trying to calm the movement, by responding to some of its demands, but in vain. The October 17 uprising took up many social demands including for a progressive tax system, social security, and massive investment in the water and electricity networks. The whole country still suffers from frequent power cuts due to a lack of investment in infrastructure. Thus, the luckiest often buy an oil generator in order to have electricity during power cuts, while the poorest have several hours a day without electricity.

Young people and women at the forefront

After several weeks of protests, many analysts expected the movement to run out of steam. This was without counting on the intervention of the youth, who gave a new breath of life to the movement.

Over the past week, many schoolchildren (high school students and younger) refused to go to school when they were re-opened. Instead, they decided to take to the streets and join the movement. In all the major cities, many youth demonstrations took place.

In a country where 41% of the population is under 25 years of age and where more than 35% of 18-25 year olds are unemployed (according to official figures, but the reality is much worse), youth are key, as are women who, for the first time in the country’s history, are at the forefront of a mass social movement.

This is why key demands for a significant improvement in women’s rights are emerging, even in the most religious regions. It should be noted that in Lebanon, according to the World Bank, a woman has only 60% of a man’s rights. For example, she is prohibited from receiving family allowances unless her husband has died or is unable to work. It is still legal in Lebanon to marry a child under 16 years of age as long as the parents agree. Such laws are now being challenged and women are rightly calling for a new civil code in which they would be equal to men.

Perspectives for the movement

This massive movement is really a first in the country’s history. While giving it full and enthusiastic support, we must also be aware of its weaknesses. To achieve more victories and move towards real change, the movement needs to structure and organize itself in the workplaces, where real economic power is held. The workers’ and social movements are still at a nascent stage in Lebanon. Less than 8% of Lebanese employees are union members, and the few unions present in Lebanon are mostly ineffective in terms of struggle and work hand in hand with the ruling political parties. No mass independent workers’ organization exists to date.

The Communist Party of Lebanon (CPL), heir to Stalinism, has since the fall of the Soviet-Union considered Hezbollah as an ally because of its anti-American and anti-Zionist policy. Nevertheless, its alliance with such a ruling party that benefits as much as the others from the system is not well perceived by the population despite the recent radical change in its position.

This lack of organized leadership is a serious problem for this revolt. And this is reflected in one of the movement’s key demands, which is the constitution of a transitional government made up of independent experts. Even if this demand is understandable coming from a population in search of an alternative, such a government would have great limitations.

If such a government could initially allow some limited social advances to calm the situation, it would ultimately work with the country’s economic elite. The population would still lack the necessary public services.

In the same way, foreign interference would only serve the imperialist interests of this or that imperialist power, whether at a regional level, with Saudi Arabia or Iran, or with global imperialist powers such as the USA or Russia.

The Lebanese people must understand that only they can take charge of their own future. Putting this power in the hands of a minority, however “secular and apolitical” it may be, would only postpone the problems already present. One of the movement’s demands could be the creation of a revolutionary constituent assembly to draft a constitution that would truly meet the needs of the oppressed workers and masses and demand public ownership of the biggest private companies central to the economy, which currently benefit only a handful of people.

A first step in this direction could be the organization of meetings and coordination committees in the workplaces and in the neighborhoods to develop a set of demands and organize actions. This democratic organization could consolidate the unity of the oppressed and the workers and lay the foundations for new mass organizations to defend their interests. This would be an ideal way to thwart all attempts to divide the movement or put it to sleep with empty promises and to build the struggle towards a real popular government, i.e. an anti-capitalist and socialist government that would ensure that the means of production are put into the hands of the oppressed workers and masses to plan the economy in the interests of the majority and no longer in the interests of the economic and political elite.

Solidarity with the Lebanese People: Bring Down the Corrupt Elite!

ABOUT US
Socialist Alternative is a national organization fighting in our workplaces, communities, and campuses against the exploitation and injustices people face every day. We are community activists fighting against budget cuts in public services; we are activists campaigning for a $15 an hour minimum wage and fighting, democratic unions; we are people of all colors speaking out against racism and attacks on immigrants, students organizing against tuition hikes and war, people of all genders fighting sexism and homophobia.
Contact us: info@socialistalternative.org
FOLLOW US
© Socialist Alternative 2020 | All rights reserved
24 Shares
Tweet
Share24