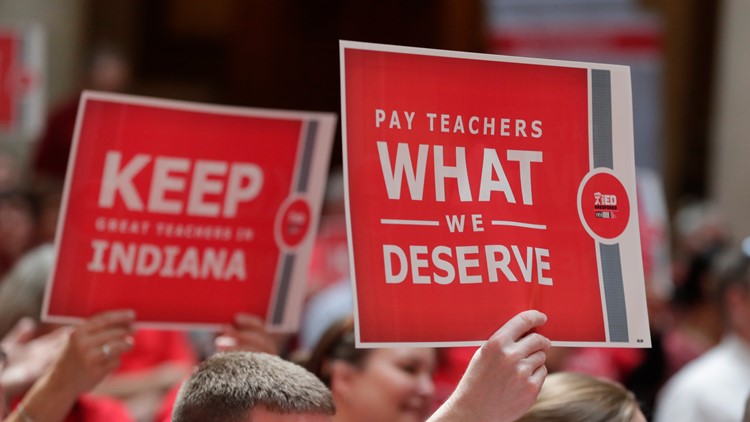 As the Indiana legislature returns to session this week, thousands of Indiana teachers and school staff will rally in an effort to reverse the decades-long trend of cuts and unpopular reforms to public education. Over 13,000 have registered to attend the rally at the Indiana Statehouse on Tuesday. The surge of teachers requesting personal days has forced over 100 school districts, representing nearly 50 percent of the student population, to cancel classes.

The protest in Indiana continues the wave of statewide mobilizations and strikes that has defined the #RedForEd movement over the past two years in states like West Virginia, Arizona, and Oklahoma, where teachers have fought and won major victories around teacher pay, pensions, and school funding.

Socialist Alternative stands unequivocally with the teachers and school staff fighting for public education in Indiana.

The union is raising three demands as part of Tuesday’s action:

These are modest demands compared to the enormous needs of public schools in Indiana, following decades of attacks by big business, education profiteers, and the right-wing political establishment. While things like the externship law provided a spark for the anger of many teachers, the roots of the crisis go much deeper.

“The problem is that we’re already overworked and underpaid,” Jessica Berg, an English teacher at Franklin Central High School in Indianapolis, told Socialist Alternative. “If something doesn’t change in education so we have the time and space to teach children – smaller class sizes, more freedom with our curriculum – if we can’t fix those other things, it doesn’t matter how much time we spend outside the classroom. It doesn’t matter if we spend 15 hours with a company or not. The implementation is impossible.”

Indiana ranks 47th in the country in per-student spending on education. It ranks 51st (aka dead last) in teacher salary growth since 2002. Nearly every school district is experiencing a teacher shortage, yet Indiana continues to pay teachers less than any other state in the Midwest.

This is no mistake. Indiana has been a test lab for the billionaire-backed “education reform” efforts, whose real goal has been to defund public schools and break the power of teachers unions. In 2011, Indiana launched the country’s most expansive school voucher program, funnelling tax money into subsidies for private schools at the same time that then-Governor Mitch Daniels was preparing to cut $300 million from public education.

The Indiana political establishment has been ruthless in its attempts to smother the voice of teachers in making education policy. After teachers successfully elected a rank-and-file educator, Glenda Ritz, to the position of State Superintendent of Public Instruction in 2012, Republicans (led by then-Governor Mike Pence) sabotaged her victory by stripping the position of its most important powers. Having stripped Ritz of all meaningful power, the state moved to make it an appointed seat, preventing any future rank-and-file efforts to capture the position.

Reversing the damage done to Indiana schools over the past decades, and overcoming the resistance of the Indiana political establishment, will require an organized and militant fightback on the part of teachers and their unions. The rally on Tuesday is a positive step, but more will be necessary.

Important features of the powerful teacher movements in West Virginia, Arizona and Los Angeles included: building powerful activist groups in each school, building broad public support for improvements in public education among parents, students and the community, and building escalating public activities to demonstrate this public support for their agenda. These were all essential steps for building towards a powerful strike movement that won important victories against the right-wing education agenda in the state legislatures.

A victory for Indiana teachers is a victory for the national movement. Strengthening and uniting this movement will be critical for fully defeating the capitalist agenda for school privatization. This means rebuilding fighting unions as well as building a political party that truly represents the interests of working people, including fully-funded, high quality public schools.