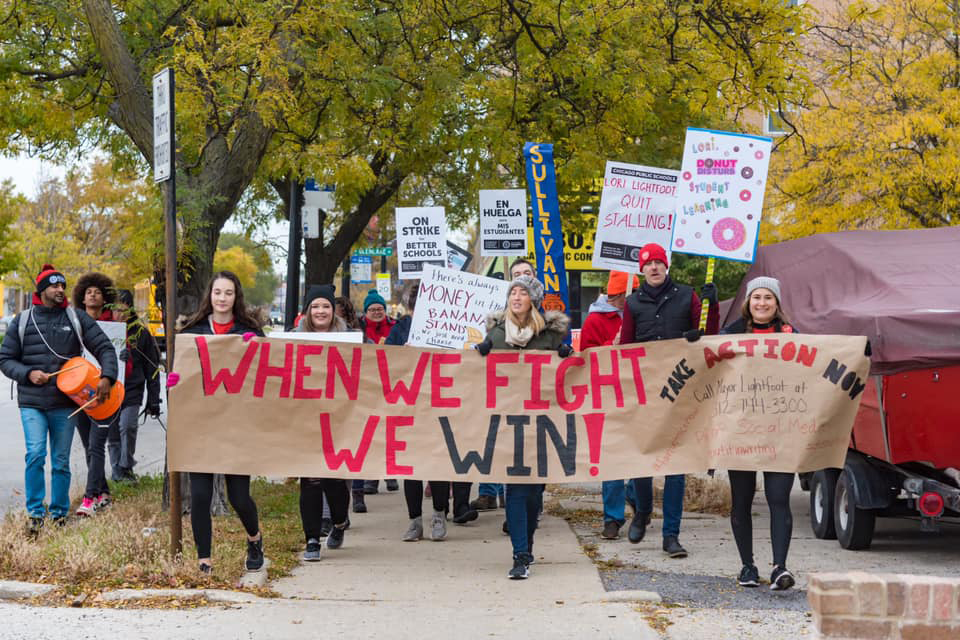 The longest Chicago school strike since 1987 was suspended November 1 after 11 days in which the Chicago Teachers’ Union (CTU) with 26,000 members, along with the 7,500 mostly low-paid school workers in SEIU Local 73 stood united, together with hundreds of community supporters in the fight for better schools.

Socialist Alternative offers its congratulations to the thousands of SEIU and CTU members who went on strike for the schools our kids deserve. This is not an easy fight, waged against a powerful corporate establishment and their representatives in the Democratic Party. The union members deserve credit for the bold demands they put forward and their willingness to struggle.

The previous strike, in 2012, helped inspire the RedForEd movement that started in West Virginia in 2018 and significantly demanded adequate funding for schools, not just wages or benefits. Therefore, the 2019 strike in Chicago was watched carefully by teachers and working people all over the country.

Both unions approached the strike with similar goals – to reverse the underfunding of Chicago schools while raising their lowest paid members out of poverty. But the CTU’s initial demands were even more transformative, seeking to create “The Schools Our Children Deserve.” While there were victories in this contract, it largely did not live up to the demands from the start of the strike and leaves much still to be fought for.

In 1995 a state law banned Chicago teachers from striking over class sizes. Next year another law set up privately run charter schools, to be paid for out of the public schools’ budget. Today overcrowded public schools compete with charters for the children of a shrinking working class population, stressed out by the high cost of living and Chicago’s massive social problems. Each year brings more teacher layoffs creating a vicious cycle of further cuts. 17,000 of Chicago Public Schools (CPS) students are homeless and schools are desperately under-resourced.

The union’s 2019 contract demands challenged the 1995 law by calling for the hiring of 2,000 teachers to bring class sizes down to a reasonable standard: 20 students in kindergarten, 24 in first through fifth grade, and 28 above that. The union also demanded that the district hire 3,000 non-teaching staff: social workers, nurses, counselors, special education assistants, and librarians, costing $880 million over a three year contract.

Newly elected Mayor Lori Lightfoot’s counter-proposal offered raises of less than 3% a year stretched out over five years, with no staff increases, for a total of only $300 million.

After the State’s fact-finder sided with Lightfoot, the unions prepared to strike together on October 17. Both unions’ members were ready for action, approving the strike by margins of over 95%.

But as the date approached, the teachers’ union missed a golden opportunity to build community support by publicizing its demand for the creation of 5,000 jobs. Instead, the leadership chose to emphasize candidate Lightfoot’s campaign promises to fix Chicago’s schools, using the slogan “Mayor Lightfoot, keep your promises! Put it in writing!” – meaning, in a contract which the Union could legally enforce.

But Lightfoot’s promises never amounted to more than a continuation of the status quo. She never called for hiring additional teachers, and she had talked of only 250 nurses and 200 counselors. The slogan “Put it in writing,” was catchy and taken up by the rank and file on demonstrations as a demand for Lightfoot to bargain in good faith. Thus, while the demonstrations showed the commitment of the teachers to fight, the CTU leadership was using the same language to signal their willingness to come to an agreement.

The union’s slogan “for a nurse and a librarian in every school” was inspiring, as were the revelations that school clerks become de facto counselors on homelessness, and pointed to huge problems that many Chicagoans may not have been aware of. But the crucial issue of class size was framed legalistically, as one of enforceable contract language, while the demand for 5,000 jobs was never raised in public. Further, instead of clearly campaigning for new taxes on the rich and corporations as it has done in the past, the union’s public messaging, repeated in nightly press conferences, was that “the city has the money.” This was aimed at the Mayor but missed the billionaire bosses that stand behind her.

The strikers were heroic, with picket lines at every one of Chicago’s 517 public schools from 6:30 to 10:30am daily and downtown demonstrations of which the first two were estimated at over 20,000. A downtown rally on the fifth working day of the strike, planned with community groups to coincide with the Mayor’s first annual budget speech, was massive with over 30,000 marching in the morning rush-hour.

But other things were less well organized. For example, the daily demonstrations were announced to members on the morning picket lines, with little time to plan ahead. Neither union had a strike fund, and members had not been told to expect a long strike. With the city establishment behind her, Lightfoot refused to budge beyond relatively minor concessions, insisting “There is no money, period.”

After seven working days, CTU leadership signalled they were ready to settle, announcing that only $38 million – less than half of one percent of the CPS budget – separated the two sides. The next day, they told a members’ conference call that they had given up on the main demand for smaller class sizes, and would agree to a five year contract “if the terms were right.” The same weekend, SEIU Local 73 settled, winning up to 40 percent wage increases over five years for some positions, but with an agreement allowing them to respect the teachers’ picket lines.

Strikers still kept up the pressure, despite bleak and wintry weather and the concessionary talk of the leadership. Many still hoped to win on the issue of prep time for elementary school teachers. But on October 28, the Union’s House of Delegates (HoD) was called to vote on a Tentative Agreement (TA) following a divided vote of 70-30 on the bargaining team. The HoD voted by 364-242 to suspend the strike if the Mayor agreed to make-up days later in the year, and after one more day and and one more demonstration, school resumed on November 1.

The TA contains some concrete victories. These include a groundbreaking commitment to hire specialized staff to help students experiencing homelessness, in addition to 209 additional social workers, 250 nurses, and 280 Special Ed case managers, phased in over five years.

On class sizes, the union won $35 million a year to provide some relief to teachers and students dealing with already overcrowded classrooms. But the Board’s class size standard remains unchanged at an unmanageable 28 students in K-3 and 31 students in most 4-12 classrooms, and the money is to be controlled by a labor-management committee that seems mainly focused on adding teaching assistants.

Meantime, teachers and staff will be legally barred from striking again until 2024, after the next Chicago mayoral election. Lori Lightfoot and CPS, backed by the billionaire education “reformers” whose goal is to wreck, not fix, public education, will take these five years to regroup and find a thousand ways to chip away any gains that were made – much in the same way Rahm Emmanuel destroyed victories of the 2012 strike. For all of these reasons, and based on many discussions at the picket lines, and on demonstrations, Socialist Alternative called for a “No” vote on this tentative agreement.

This contract does not come close to meeting the demands of the thousands of teachers who went out on strike and the community that supported them – a transformation to create the schools our children deserve. Thousands of new hires are needed and require funding in the hundreds of millions, which would mean new taxes on big business. The hard-fought strike proves that workers are willing to fight, but as the five years drag out and more promises are broken, bolder demands and more militant tactics will be needed.