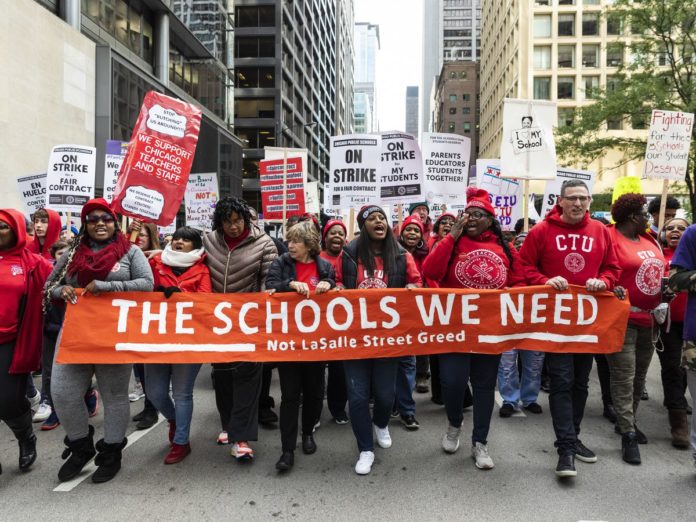 On the morning of Thursday October 17, Chicago Public Schools (CPS) workers went out on strike for better schools for the city’s 350,000 students. The combined membership of Chicago Teachers Union (CTU) and SEIU 73 – over 32,000 strong – picketed in front of schools and on street corners and then converged downtown with a sea of red and purple in the afternoon on Thursday and Friday. Each day saw 20,000 rally downtown.

The mood on the picket lines is energetic and positive. Teachers, educators, and schools workers have seen their working conditions and students’ learning conditions erode for years. The strike has been a blast of energy that has raised the possibility in the minds of workers that the tide can begin to be turned in our schools. Some picket lines have resembled dance parties and on Friday, one school even barbequed out on the sidewalk.

Additionally, solidarity is growing between the rank-and-file members of both unions. CTU is well known for setting the example of the RedforEd movement with its 2012 strike. But during that strike thousands of SEIU 73 members – mostly custodians, security guards, and paraprofessionals – remained in the buildings due to a mistaken approach by SEIU’s past leadership. By striking together this time around, both unions are setting an example to the whole labor movement, showing that unity in action strengthens all of our struggles and is an important tactic to build power for working-class victories.

Union demands include smaller class sizes, expanded prep time, and increased staffing – including a librarian, social worker, a nurse in every school, and staff to aid homeless children and their families find housing. Another critical issue is pay for support staff. These are educators in both unions who work daily in classrooms but make poverty wages. Workers are also demanding a host of changes to conditions for workers and students, like restorative justice training for security officers, clean schools,and the removal of private outsourced custodial managers Sodexo and Aramark. The wide-ranging demands reflect the need for big gains after years of vengeful attacks by the political establishment that followed the 2012 strike.

A key refrain from union leaders has been that Mayor Lori Lightfoot needs to “Put it in writing!” For years, Chicago Democrats have used a 1995 Republican state law to severely restrict the issues over which CTU can strike. The law relegates many key issues – such as smaller class sizes, increased staffing, outsourcing, and school schedule changes – into a “permissive” category which can only be bargained over if both sides agree. In a bold step, the unions went out on strike over mandatory bargaining issues, but told members that they would not end the strike until they see core permissive issues “in writing.”

The strike is having an effect. Mayor Lightfoot insisted, right up until the eve of the strike, that the city would not bargain over permissive issues. Yet on Friday, for the first time the city’s contract proposals included concessions on staffing and class size. But contract language needs to be backed up with the funds to implement it. For instance, without more teachers class size can’t be reduced.

To get there, the union members should expect to continue to face an obstinate Lightfoot. The mayor was a corporate lawyer and political unknown before her election in May. Despite running as a progressive and advocating for equity and increased staffing in schools, this strike has exposed Lightfoot’s firm political allegiance to big business. She has kept Rahm Emanuel’s notorious CPS team in place and let them guide bargaining, not joining the negotiations herself. Publicly, she has attacked teachers for being greedy, ignored support staff issues, and claimed, as she did on Friday, “There is no more money. Period.” This approach has infuriated union members as seen by the popularity of signs comparing her to Emanuel at the mass rallies.

On Thursday, when union members passed LaSalle Street Board of Trade, “Chicago’s Wall Street,” flyers with insulting messages were dropped on marchers from the windows. The billionaires, bankers, and bondholders will continue to fight to defund schools and lower corporate taxes.

This Wednesday October 23, Lightfoot will present her budget solutions for how to close a general city budget shortfall. Reports are now leaking of her plans to pass this burden to the backs of working people. Strike leaders could use this announcement as an opportunity to broaden public support by calling a mass rally around a call to tax the rich to close the budget shortfall and fully fund Chicago schools. Educators, schools, workers, and students cannot trust Lightfoot to do right by our schools.

Strike Headed Towards Second Week, Escalate the Struggle to Win

Faced with Lightfoot’s determined big business agenda, many educators and workers are looking ahead to more picketing on Monday. Lightfoot has made some limited concessions, but how do we win our full demands in writing, not just the minimal half-measures currently on offer? We should expect the mayor to try to wait unions out and turn public opinion against striking educators. CTU and SEIU 73 will need a strategy to overcome this.

Union members should feel confidence in the energy and determination that exists among the rank and file. Strikers also report enormous public support. But we need to overcome weaker community preparation. Mass rallies have been well attended by enthusiastic union members but we have not seen seen the mass public participation that LA teachers achieved in their strike earlier this year. CTU still has largely the same leadership as in 2012, but unfortunately has not matched the resources and effort put into community mobilizing seen in 2012. However, there’s still time! Additionally, union leaders need to communicate clear proposals to members on how to build community support for the strike, the overall strike strategy, and crucially how long of a strike members should prepare for.

CTU and SEIU 73 leaders should not lean toward a compromise deal and instead start messaging their resolve to fight a long strike if necessary. There is plenty of money in a wealthy city like Chicago to meet the unions’ demands. Union leaders need to mobilize the current public support and call on the whole labor movement to join the struggle. Bernie Sanders has offered to support in any way he can, we should take him up and ask him to help build community support in Chicago and solidarity nationwide. Union leaders should invite Sanders and Alexandria Ocasio-Cortez to do a mass outdoor rally that invites parents and working people to join the struggle for our schools against the billionaire class.

Our strike needs to answer Lightfoot’s claim that Chicago has no money for schools. Lightfoot is exaggerating the costs of union demands, claiming they will cost $2.5 billion. This is a blatant attempt to divide Chicago’s working people from educators and school workers. Union leaders have mostly pointed to new CPS funds recently allocated by the state to cover contract costs. But our movement should more clearly combat Lightfoot by loudly demanding that we pay for the schools we need by taxing millionaires and billionaires, large corporations, taking back TIF developer handouts, and taxing the quadrillions of dollars in futures transaction on La Salle Street. The city council should take action and you can sign our petition here calling on the Progressive Caucus to bring forward measures to tax the wealthy.

Finally, it’s critical that CTU and SEIU 73 stay firmly united throughout this struggle. Among rank and file workers there is a great desire for this. But just before the strike, confidence in unity was shaken after SEIU 73 leaders settled the contract for 2,500 Chicago Parks District workers. These workers were originally supposed to join educators and school workers in walking out and there was widespread disappointment among rank and file CTU and SEIU 73 members over the settlement. This decision was a mistaken concession to the “divide and rule” tactics of the political establishment. Syncing up contracts and striking together needs to be a conscious power-building strategy rather than just a tactical convenience. As the strike goes on, Lightfoot will surely try to divide the two unions and rank-and-file members must be ready to stand up against this and maintain unity. An injury to one is an injury to all!

A victory in Chicago will be a step toward the transformation of public education in Chicago and would be an inspiration nationwide continuing the RedForEd Movement. However, we must learn the lessons of the period after 2012, and expect big business will strike back against any victories. This only underlines the need to build the strongest strike possible right now. Getting strong language in the contract would be a significant step forward. But this would need to be followed up with a serious strategy to enforce the contract including school level and citywide mobilizations. Key to this is building an alternative independent political force in Chicago and nationally based on the interests of working people who can challenge corporate rule.

Under capitalism, ruling elites will always try to wrest back gains workers win. Socialist Alternative will be on the lines throughout this struggle supporting strikers and advocating for a socialist future where can we can end, once and for all, the rule of a tiny profit seeking few, and win the education, jobs, and quality life that all people deserve.