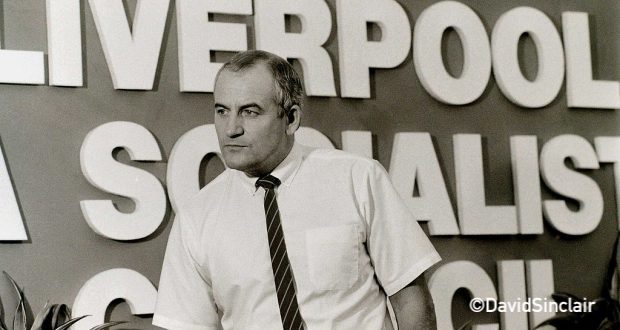 Liverpool lost one of its greatest ever working-class leaders, and a great family man, when Tony Mulhearn passed away at the age of 80 on October 7.

By Hugh Caffrey, Socialist Alternative (CWI in England and Wales)

Tony was in many ways born a class fighter. The appalling poverty of the Liverpool slums, which endured longer than in many other cities, were something that stayed with Tony and he often spoke about when reflecting on how struggle could change the everyday conditions of working-class people.

Tony became a supporter of Militant in the 1960s and always remained a supporter of it and then a member of the Socialist Party. The correctly-applied ideas of Marxism once welded with the determination of fighters like Tony and others, laid the basis for the huge struggles of the 1970s which finally overcame the blight of religious sectarianism in the city. They also prepared the epic confrontation of the city council with the Thatcher government 1983-87, in which Tony was the leading figure. As president of the District Labour Party Tony led the body which brought together the massed forces of the city’s working-class, women and youth organizations, with up to 500 delegates attending meetings. On the council, while others played prominent roles it was undoubtedly Tony’s ideas and acumen which steered it at its best.

This was a mass struggle with organized workers at its centre and drawing in all other forces of the oppressed through union and community organizations and particularly a mass Labour Party. The council was accountable to this movement and fighting and negotiating on its behalf. Thatcher was compelled to retreat, concede tens of £millions in funding, and the council proceeded to build thousands of homes, construct a wide range of community facilities, and create thousands of jobs. Ultimately the movement was defeated not by Thatcher but by its isolation orchestrated by the cowards on the right of the Labour party elsewhere and nationally, above all the loathsome party leader Neil Kinnock.

This has not been forgotten by the Liverpool working-class, and on Merseyside more generally. Tony would be regularly approached in the street by people who remembered his role and still had unflinching respect. But Tony never let this go to his head and once admitted to me how he sometimes felt awkward at being treated like a celebrity. Fierce in his beliefs and staunch in his views, Tony could also surprise you with his modesty. He loathed flaunting of personality and ego.

In 2011 Tony was unsure whether or not he wanted to run for  the newly-created post of executive mayor the following year. Then he heard the infamous epithet from Labour’s candidate the current mayor Anderson, “I’m not old Labour or new Labour, I’m Joe Labour”, and his mind was made up! Throughout that campaign, the long memory of working-class people for the leader of the struggle which had delivered so much was clear. If the election had been held only on the poorer north side of the city, Tony would have come second. TUSC at that point was becoming the left alternative to Labour in the city and Tony personified the political link with the earlier mass struggles and the new situation.

Tony was always a trade union man. His formative years in the print industry and the experience of the hugely powerful industrial unions gave him an insight into the labour movement which remained relevant. As the working world changed and Tony ended up working in the civil service, he always sought to understand and discuss the changes in this situation and what it meant for the tasks of the unions and Marxists within them. Tony led, and contributed to, many an important discussion on these questions. In his retired years Tony was a very active member of the Merseyside Pensioners Association, continuing to apply that experience. “You always move a motion Hughie”, he’d say, “otherwise no-one knows what’s been agreed”. Good advice which he applied every week, even when ill producing a motion for other comrades to put forward. Tony’s press releases on behalf of the MPA excoriated enemies of the working class and expressed the enthusiasm felt by many for the potential opened up in the Labour Party by Corbyn’s election as leader, if only this was carried through by the deselection of Labour councillors and MPs locally.

Tony was a fine human being. Warm and friendly, generous and thoughtful, and a tremendous family man. He’d always buy a poorer comrade a drink, or stick up for the younger comrades if he thought he needed to. The love felt for Tony by his many children, grand-children and great-grand-children was obvious to anyone who met them. The tragic passing of Tony’s wife, Maureen, in 2018 and his subsequent illness limited what Tony could do physically in the last year or so. But he remained passionately articulate about what he thought and saw as the tasks of the day, and determined to do his best to discuss these with everyone and push forward the struggle even an inch.

Tragically Tony passed just before the launch of his autobiography, due to be held this Sunday. But it has been published, and deserves the widest readership to pay tribute to the man and his ideas, and his struggle and example. If Tony was still with us he would say that it’s not about him, it’s about other comrades striving to do the same. That humble determination to fight for a better socialist world is something we can all emulate to honor his memory.