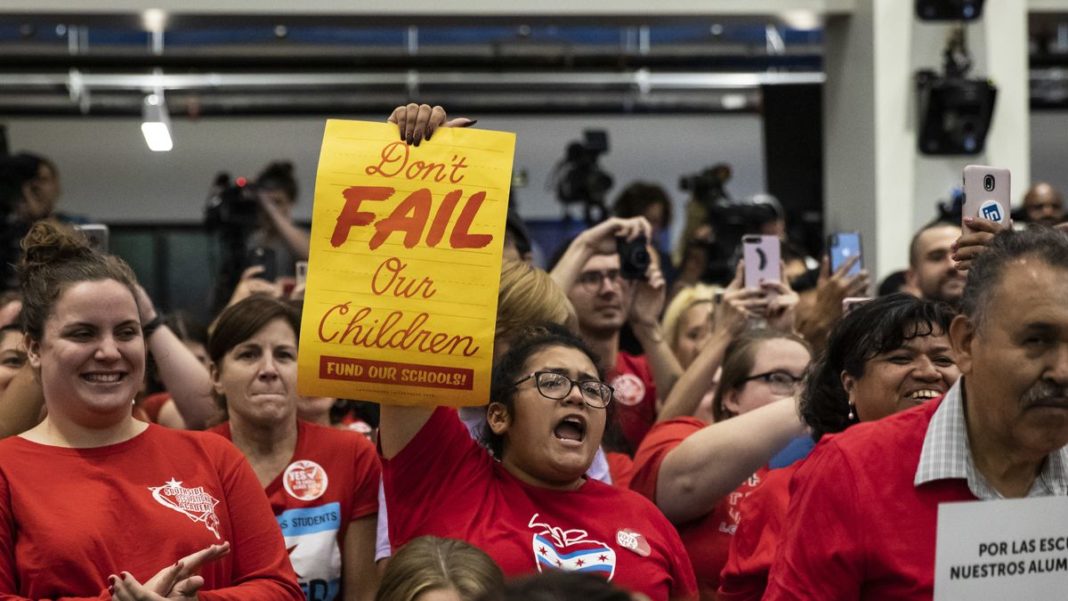 Against the backdrop of successful teachers’ strikes across the country, contract struggles for the two major unions in the Chicago Public Schools (CPS) are escalating. As we go to print, strike action is becoming more likely every day for the Chicago Teachers Union (CTU) and SEIU Local 73 and the almost 33,000 teachers, educators, and schools workers they represent. In preparation, the unions organized a mass rally featuring Bernie Sanders who expressed his support for the struggle and funding Chicago schools.

The city establishment and the corporate elite they represent continue to push the “broke on purpose” status quo in CPS. In an attempt to undermine broad support for educators, new Mayor Lori Lightfoot is focusing almost exclusively on pay in order to present teachers as greedy. In negotiations, she has offered inadequate pay increases while ignoring the deep wounds in the schools system that remain after decades of cuts and sabotage in the name of corporate education “reform.”

For CTU and SEIU 73 this contract fight is about grappling with the whole past period of attacks waged against educators, students, and the very idea of public education in Chicago. Under the leadership of the Caucus of Rank and File Educators (CORE), CTU went on strike in 2012 and set an example for the #RedforEd strike surge. But after the strike, Rahm Emanuel and the Chicago Democratic establishment returned with a vengeance, closing dozens of schools, setting schools against each other with new ratings and funding systems, hounding activists, and driving out experienced teachers. After years of worsening conditions many educators are exhausted, frustrated, and fed up.

To push for their demands, both unions are getting ready to strike by mid-October – if necessary. This contract fight is an opportunity to reestablish momentum in the fight for high quality public schools in Chicago. It will also be watched by teachers and other workers across the country who are increasingly looking toward strike action.

Transform Our Schools, All Out Support for CTU and SEIU 73

Educators and school workers are looking for real gains that will push back against the grinding toll of work under CPS. Compensation that values educators’ vital work and allows them to live in an increasingly expensive city is important. This is especially the case for support staff in both unions. SEIU 73 members, which include special education aides, security officers, bus aides, and custodians, are making poverty wages while often working with the highest need student population.

But most critical in this fight, teachers and educators need working conditions that allow them to meet students’ learning needs. Scandalously, only one in four Chicago schools has a full time librarian and almost half are without a nurse. CTU is demanding increased support staff such as nurses, librarians, and social workers, smaller class sizes, and respect for prep time and professional self-direction, among other issues. Winning these demands would strengthen our schools, improve students’ lives and education, and create momentum for more gains for public education.

At the same time educators are moving into action, 3,000 Chicago Park District workers, also organized by SEIU 73, voted 94% in favor of strike action in the face of the city’s outrageous proposal to double their health care costs on top of the existing low pay and abuse of part-timers. Simultaneous strike action from both unions, across both agencies would set an example of public sector unity in the face of austerity. The unions’ current demands will be implacably opposed by the developers and financiers that run Chicago. The rest of city’s labor leadership needs to give these workers its unequivocal support, mobilizing its members and the public to the picket lines and actively arguing for the restoration of Chicago’s battle-damaged public schools as part of a program of building a city fit for workers to live in, instead of the playground for the rich that Daley, Emanuel and now Lightfoot seem intent on building.