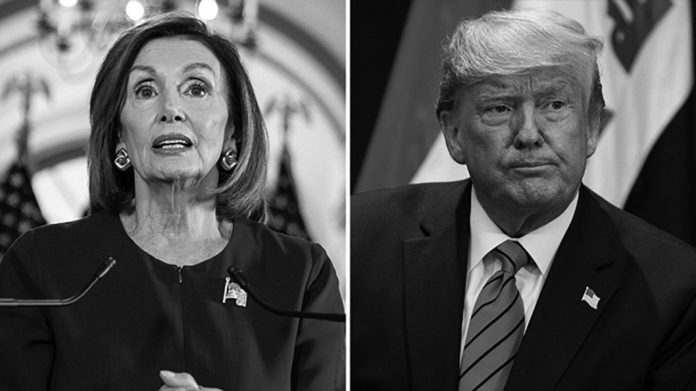 As we go to press, the Democratic Party leadership in the House of Representatives has opened a formal impeachment investigation against Donald Trump. While this is not the same as definitively bringing forward articles of impeachment, it is clear now that this is the direction in which things are headed. Millions of people who hate this reactionary regime will welcome that the Democrats have finally taken this step.

We need a mass nationwide day of action to push forward a process to drive Trump out of office. Every day of this regime adds fuel to racist right-wing violence, mass deportation of immigrants, and a trade war can that can accelerate the prospects of yet another recession. The days of a “Predator in Chief” sexist billionaire in the White House need to be brought to a close.

This won’t be possible if we allow the Democratic Party leadership to limit calls for impeachment narrowly to the issue of Trump’s attempts to pressure the Ukrainian regime to investigate Biden. To build a mass movement, we need to not only oppose Trump but also pose an alternative: Medicare for All, a Green New Deal for working people, support for strikes, and a stop to mass deportation and detention of immigrants.

The Democratic Party leadership has taken far too long to introduce impeachment. For many months, Nancy Pelosi has held the line against moving in this direction, concerned about the impact of impeachment proceedings on the Democrats’ electoral chances and also wanting to not cause “instability” in the system. Up until recently it seemed that the push towards impeachment had stalled. Recent revelations though point to Trump putting pressure on a foreign power to help him gain advantage over Joe Biden, a possible rival candidate in next year’s election.

We in Socialist Alternative have supported impeaching Trump from the beginning.  However, we also stated that we did not accept the Democrats’ narrative that Russian government meddling played a key role in the outcome of the 2016 election. Nevertheless, Trump’s authoritarian tendencies are very clear and we oppose his deep corruption which goes hand-in-hand with ongoing voter suppression by the right wing.

Trump and other right-wing politicians around the world have risen to prominence due to distrust in the capitalist establishment who have overseen decades of budget cuts, war, privatization, environmental devastation, and union-busting. We have record income inequality, and the politicians of both parties are bought and sold by corporations and the capitalist system they represent. The Democratic Party leadership, which created the space for Trump, cannot be trusted to carry out a strategy to defeat him or the underlying cause for his ascendancy. That’s why we need a mass socialist movement to pose an alternative to both right-wing populism and corporate domination.

Impeachment could certainly pass in the House where there’s a Democratic majority, and this would be significant. However, a public trial against Donald Trump will likely be dead on arrival when it reaches the Republican-dominated Senate without a mass movement to drive Trump out or more shocking revelations. It would require 20 Republican Senators turning on Trump in order for him to be removed from office.

Regardless of the exact outcome, impeachment proceedings will likely develop into a political and media focal point in the coming months. The Democratic primaries have become much more contested than the party’s establishment would like, with Bernie Sanders and Elizabeth Warren topping many major polls. The establishment would have far preferred to enter the primaries with an already anointed candidate, but Biden has been unreliable in fulfilling that role.

Therefore the initiation of these impeachment proceedings can be seen as a strategy by the party leadership to posture as unafraid to take on Trump. However, with Biden as a major subject in these proceedings, it is not guaranteed that this will help him in the slightest. The real danger for the Democrats, given their political weakness, is that they will fail to make the case with the electorate that their narrowly-defined impeachment articles mean the president should be removed. A new Quinnipiac poll show 37% support impeachment while 57% oppose.

In truth, the most effective way to defeat Trump as we enter the Presidential elections is to build a mass movement around Bernie Sanders’ campaign and program. Working-class and young people are lit up by Sanders’ proposals for erasing student and medical debt, taxing the rich, a Green New Deal, national rent control, and Medicare for All. Fighting for this program is not just an electoral campaign, but also should include mass rallies, direct action and strikes.

A mass movement fighting for this program is the best bet at taking down Trump. As the Chicago Teachers Union prepare for a possible strike, Bernie Sanders’ hosted a rally with them to amplify their demands for fair pay and benefits, smaller class sizes, and staffing. This shows the potential that exists for a movement that brings together the unions as well as young people energetically fighting for Sanders’ pro-working-class program. So does the hundreds of thousands of young people around the country demanding “system change not climate change” and opposing the climate denier in chief.

In almost every single national poll, Bernie Sanders’ defeats Trump in a general election. This is the basis on which he can be defeated. The recent developments around impeachment should be seen as a welcome sign that Trump is vulnerable and now is the time to begin constructing a genuine mass movement to bring down Trump and fight for a pro-working class, anti-racist program. This can be a crucial step towards ending this rotten capitalist system and all the racist, sexist, anti-worker political monsters it creates.