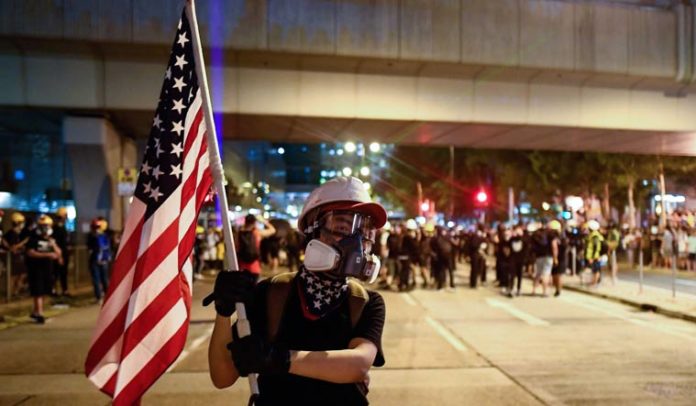 Since Hong Kong’s mass revolt erupted in June, the Chinese dictatorship (CCP) has pumped out propaganda about a ‘color revolution’ fomented by the U.S. and other western actors. This is straight from the CCP playbook. The aim is to mobilize nationalist sentiment to support state repression while at the same time putting protesters, foreign media and governments on the defensive.

Internationally there also some ‘lefts’, mostly with a Stalinist outlook, who parrot Beijing’s line. Mass protests two years ago in more than 100 Iranian cities against the dictatorship in Teheran were also dismissed by these groups as a “U.S. backed” movement.

These social media warriors are now among the most ardent defenders of police brutality in Hong Kong. “Police in America are much worse”, they say. We agree up to a point, but genuine socialists are consistent. We oppose police violence in Ferguson, in Paris, and in Sheung Wan.

Those who subscribe to the color revolution scenario focus a lot on the role of pan-democratic politicians like Joshua Wong, Martin Lee, and media mogul Jimmy Lai Chee-Ying, who all have connections with the right-wing political establishment in the U.S. But these political figures did not initiate the current mass movement and the truth is they’ve been side-lined by the more militant youth since the beginning of the movement. One of the reasons the current Hong Kong movement is ‘leaderless’ – which is problematic as the struggle becomes more complex and drawn out – is precisely because of the backlash against the timid and compromising ‘leadership’ of the pan-democrats in the past.

We can see the CCP’s ‘color revolution’ narrative is false because the regime itself doesn’t believe it. If they really believed Trump was trying to stage regime change in Hong Kong, as a first step to unseating the CCP in China, why is Beijing still discussing how much soya to import, and which parts of China’s financial sector it will allow Wall Street companies to take over?

This is what they’re discussing in the two countries’ stop-go trade negotiations. You don’t negotiate on this stuff with a foreign power that you seriously believe is conducting a covert war (color revolution) inside your territory.

Last week, Beijing and Washington agreed the stalled trade talks would resume in early October. The timing is highly significant as the talks were originally supposed to take place in September. The delay is a peace gesture by Trump’s administration to push the talks back so they don’t interfere with Xi Jinping’s plans for a massive, nationalistic and militaristic celebration of Chinese power on October 1, the 70th anniversary of the CCP coming to power.

This is not just about honoring history. For Xi, who is under mounting pressure within the regime, and whose ‘strongman’ mantle has been dented by several setbacks including Hong Kong’s protests, the 70th anniversary pageantry is a badly needed nationalistic vitamin shot. This aims to strengthen the regime that is repressing Hong Kong. The US wouldn’t go along with this timetable if it really wanted to mess with China over Hong Kong. But it only wants to mess with China over soya and financial deregulation – there’s a big difference.

The CCP regime uses the ‘foreign agents’ bogey every time it faces a significant political challenge. The Jasic Support Group, which suffered brutal repression, arrests and disappearances last year, for campaigning in support of trade union rights for factory workers in Shenzhen, was also accused in China’s state-controlled media of being financed and manipulated by foreign forces.

The youth involved in the Jasic campaign were mostly ‘Maoists’ and other left wingers, and some had a degree of illusions in Xi’s regime. Nevertheless, after months in detention under conditions we can barely comprehend, they ‘confessed’ in forced video confessions to trying to “overthrow” the CCP and being manipulated by “foreign forces fixated with China’s bad side”. It is worth repeating: These are ‘Maoists’. The idea they were acting in league with Trump or Britain’s MI6 is ludicrous. But under torture you can get people to confess to the most fantastic crimes.

The truth is that the U.S., Britain and other Western powers have no interest in supporting democratic or workers’ rights in China and Hong Kong. Their sole focus is to fight for their imperialist economic interests, the biggest possible share of global markets for their banks and big companies.

Because the global crisis of capitalism means the economic ‘cake’ is not getting bigger this brings these governments increasingly into conflict with China. This is the basis for the trade war and also explains why some of these governments make more noise today over what’s happening in Hong Kong than they did five years ago. But this doesn’t mean they’ve changed their standpoint and are now on the side of the protests. It’s still a diplomatic chess game with Hong Kong’s protest movement seen as a possible pawn by Washington and to a lesser extent by London.

Britain and the U.S.

Five years ago at the time of the Umbrella Movement in Hong Kong the U.K. Foreign Office issued a statement saying China’s proposed election reform offered a “genuine choice”. This refers to the CCP’s infamous ‘831’ ruling, which stipulated that only candidates approved by the dictatorship could compete for the post of Chief Executive.

The then Conservative Party foreign minister Hugo Swire conceded that “proper democracy” was not on the table in Hong Kong, but said Beijing’s offer was “better than nothing”. This pro-CCP line was dictated by the British government’s desperate hope for Chinese capital to invest in Britain’s rail, nuclear and financial sectors.

The U.S. position is similar. When former U.S. Consul General Kurt Tong gave his farewell speech to Hong Kong on July 2, he said the US government was “disappointed” to see violence and vandalism by protesters. Tong, the senior U.S. official in Hong Kong, praised Chief Executive Carrie Lam’s apology as “very sincere” (this was two months before Lam made her tactical concession to withdraw the extradition law).

“I think the best thing going forward is to communicate sincerely and for everyone to talk to one another,” Tong said. This is hardly a rallying call to support the mass protests.

Tong’s boss, Donald Trump, has made even more Beijing-friendly statements, calling the Hong Kong protesters “rioters” and declaring the crisis to be an “internal matter” for the Chinese dictatorship. This is consistent with Trump’s longstanding position as an admirer of authoritarian regimes (Putin, Kim Jong Un, al-Sissi). On the subject of the 1989 Tiananmen massacre, Trump also said the workers and students were engaged in a “riot” and praised Xi Jinping’s predecessors for the way they handled the crackdown:

“When the students poured into Tiananmen Square, the Chinese government almost blew it. Then they were vicious, they were horrible, but they put it down with strength… That shows you the power of strength.” [Playboy, Donald Trump interview, March 1990]

In the current situation, the Trump administration is primarily and cynically concerned with reaching a trade deal with China before the 2020 elections. Hong Kong and its incredible protest movement are therefore just small change in their eyes.

Still, a few misguided Hong Kong youths continue to bring British and U.S. flags to demos, probably unaware they are the victims of a political hoax.

Read more ➵ Is the U.S. promoting a “color revolution” in Hong Kong?