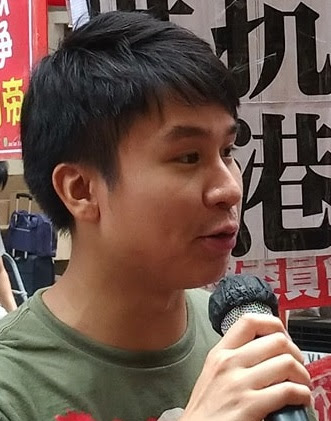 Hong Kong is facing wave of corporate ‘white terror’ – dismissals, spying and intimidation – against workers and trade unionists that voice support for the mass protest movement. Nathan Leung Lai Pong, a member of Socialist Action (CWI in Hong Kong) and an outsourced worker at HSBC, was dismissed on September 5 after participating in the general strike against the government two days earlier and giving media interviews about the need for a trade union for bank workers.

HSBC is Europe’s biggest bank and the fifth largest in the world, although four-fifths of its business is conducted in China and Asia. The company has become closely integrated with the Chinese dictatorship, with state-owned insurer Ping An now the largest single shareholder in HSBC.

In recent weeks, Hong Kong companies in many sectors have been encouraged by the Chinese regime to crack down against trade unions and workers participating in the mass protests, the general strikes (two since August 5), and even for voicing support for the movement on their social media accounts. This shows the strong links between big business in Hong Kong and the authoritarian regime. HSBC along with many other big companies have run paid newspaper adverts condemning the mass protests. It also reflects the fears of the capitalists that the traditionally weak trade unions in Hong Kong could be strengthened and radicalized as a result of the current mass protests.

A global downturn is coming, raising the prospect of layoffs, wage cuts and more austerity. In August, HSBC announced 4,000 job cuts in its global workforce. Companies in Hong Kong are utilizing the regime’s current crackdown against the mass protest movement to attack and weaken the trade unions. This is clearly shown in the airline industry where at least 20 workers have been sacked in recent weeks including the leader of one of the biggest unions for flight attendants.

The CWI together with the Stop Repression in Hong Kong campaign is appealing for international protests against HSBC on October 2 in solidarity with Nathan Leung. We are urging trade unions, left and social movement organizations to join protests and send messages to HSBC, and to local media, strongly protesting against the attacks on trade union and democratic rights in Hong Kong.

Campaign material, placards in English and Chinese, leaflets, campaign artwork, will be available soon from worldsocialist.net, chinaworker.info and stophkrepression.net.

“I am Nathan Leung, an outsourced worker in HSBC’s Guest Service Team in Hong Kong. I have been sacked because I took part in the general strike on September 3, part of the mass protests against authoritarian rule and police brutality in Hong Kong. I am active in a campaign to set up a trade union in the banking sector and at the strike I got support and media attention.

“My case is one of several where big companies in Hong Kong are trying to deprive workers of the right to strike and to participate in the historic mass protests, with similar cases at Cathay Pacific and other airline companies.

“Two days after the general strike, the labour outsourcing company that serves HSBC told me that HSBC decided to sack me on the grounds that they do not allow staff to reveal they work for HSBC when participating in political activities. This is an absurd and undemocratic practice for several reasons. HSBC is one of the biggest companies and employers in the finance sector in Hong Kong; its relationship with the Chinese regime, and the local Hong Kong government, is therefore a matter of public interest in the current mass protests.

“It is also impossible not to mention the company one works for in the process of establishing a trade union. It is clear that my dismissal is part of a wider crackdown against trade unions as part of the current protest movement, and against freedom of speech and freedom of association, which are written into Hong Kong’s laws.

“The labour outsourcing company offered me an alternative position on condition that I would not protest against HSBC’s decision or make further mention of HSBC and its actions towards me. This was unacceptable as it amounted to a gagging order and would mean that I consented to the undemocratic infringement of my rights to set up a union and to participate in legal and peaceful protests. I refuse to accept this and instead intend to continue to work for the establishment of a democratic trade union for banking and finance sector workers in Hong Kong to defend our rights including the right to free speech

“HSBC, along with other big companies in Hong Kong, has submitted to the Chinese dictatorship time and again under its economic and political pressure. For example, under pressure from China’s Liaison Office in Hong Kong, the bank decided to stop placing advertisements with a media group allied with the democratic opposition. Since the beginning of the pro-democracy mass movement in June, the Chinese regime has increased its connections with HSBC. In August, Chinese state-owned company Ping An Insurance became the largest shareholder in HSBC. Soon afterwards, three top managers resigned and HSBC published pro-government advertisements in newspapers, accusing Hong Kong protesters of “conducting violence and damaging social order”. HSBC has completely taken sides against the Hong Kong democracy movement. Now, especially since August, we see a wave of white terror by several big companies in Hong Kong with workers and trade unionists spied upon, threatened, and punished, including dozens of dismissals for supporting the anti-government protests.

“With the Chinese dictatorship directly controlling Hong Kong now, freedom of speech and trade union rights of not only HSBC workers but all Hong Kong workers will be further threatened. We must organize and resist together against the combined repression of the Chinese state and big business.

“I will continue to organize to establish a finance and banking sector trade union and protest against HSBC’s anti-union role. I hope to get support from other labour activists and workers in Hong Kong and across the world, including for international solidarity protests to support the fight for democratic trade unions in Hong Kong and China.”

All workers in the finance and banking sector are welcome to help us build the trade union. Please contact Nathan: