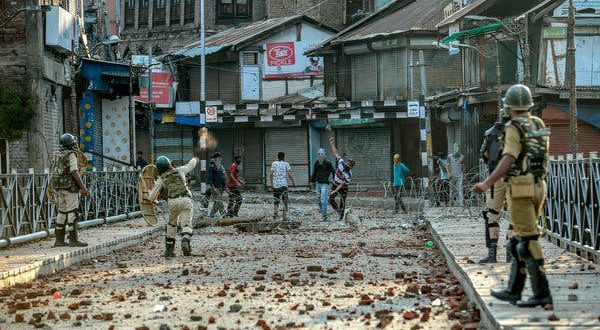 Seventy two years after the agreement between the Maharajah (King) of Kashmir and the Indian Government on accession of Kashmir in the areas of foreign affairs, telecommunications and defence, India is unilaterally terminating the autonomous status of Jammu & Kashmir. After years of rebellion in Indian-occupied Kashmir, the government announced that the autonomous status of Jammu & Kashmir is terminated and that the area would be divided into two parts: Ladakh and Jammu-Kashmir. This has far-reaching consequences for the already afflicted population.

The Indian government has stated that negotiations have not brought a solution in recent decades and that, as a result, a different course of action has been chosen. “Hard decisions have to be taken to change the situation,” said Interior Minister Amit Shah. With the removal of Article 370 of the constitution Kashmir’s autonomy will be abolished, and Modi has indicated that he does not intend to comply with the constitution. Article 370 stipulated that any change in the status of Kashmir would only be possible after consultation with Kashmir’s political representatives. There was no such consultation. On the contrary, key Kashmiri political leaders were arrested or placed under house arrest. All possible communications to or from Kashmir were blocked by the Indian central government.

After years of protest against the brutal and repressive Indian occupation, Modi is now stepping up the occupation and repression. All rights that were part of the disputed agreement with the Maharajah of Kashmir in 1947 have now been abolished. When Kashmir ‘joined’ India in October 1947, for example, it was decided that the existing Kashmiri legislation which stipulates that no one from outside Kashmir may buy land there remained. This rule, enshrined in Article 35A of the Indian Constitution, is now also abolished. It had long been a thorn in the side of the Hindu-nationalist BJP of Modi. The BJP won the recent elections with a tough nationalist campaign in which communal hatred against Muslims played an important role. The election result has now been translated into action: after decades of heroic resistance by the people of Kashmir, the BJP wants to change the composition of the population. The ability to buy land is an important part of this.

The division of Jammu and Kashmir is part of Modi’s divide-and-rule strategy. It is not unique: previously the Pakistan-occupied part of Kashmir was divided into two: Azad Kashmir and Gilgit-Baltistan. In 1974, under the regime of Bhutto, the rule that nobody from outside Kashmir could buy land was abolished for Gilgit-Baltistan, which resulted in demographic changes in the territory. The aim of splitting Jammu and Kashmir is to get the Buddhists in Ladakh and the Hindus in Jammu on the side of the Indian Government in opposition to the Muslims who make up the majority in Kashmir. The abolition of Kashmir’s special status makes the local parliament a sort of city council that can only decide on details, while important decisions are taken in Delhi.

Modi is playing with fire in Kashmir. That area was the subject of several large and small wars between India and Pakistan, each occupying a part of Kashmir (in addition to a piece controlled by China). In recent months there has been an escalation of tension following an attack in Indian-occupied Kashmir, even though the perpetrators did not come from Pakistan, but from Indian-occupied Kashmir. This led to violence against Kashmiri in other parts of northern India. The limited confrontations with Pakistan were an important part of Modi’s election campaign.

The Indian government of Modi is feeling strong at the moment: it won the elections with a hard nationalistic campaign in which the more extremist supporters did not hide the fact that they stand for a ‘Muslim-free India.’ This nationalism was necessary to hide socio-economic failure: poverty in India has not been reduced in recent years. Arch-enemy Pakistan is struggling with a weak economy and political instability. Pakistan hopes for American support, but the US establishment only needs Pakistan to be able to negotiate with the Afghan Taliban. For the rest, Washington has little faith in the Pakistani regime, especially the powerful army. The abolition of the autonomous status of Kashmir and the increasingly open attack on the Muslim population in India could increase regional tensions between the nuclear powers of India and Pakistan.

The biggest victims of the nationalist campaign by Modi are once again the people of Kashmir. They have had to endure a lot under the regime of the Armed Forces Special Powers Act (AFSPA) since 1990, but the horror is getting worse and worse. Schools remain closed, telecommunications shut down and no one is allowed on the streets because of a curfew and all tourists (mainly Hindus on pilgrimage) have been evacuated. In practice, Kashmir has been occupied by the Indian army for years and now the military presence is being expanded even further, with tens of thousands of extra soldiers deployed to the borders, holding the people of Jammu and Kashmir under siege. This was already one of the regions in the world with the largest number of soldiers per inhabitant. Although the repressive approach of the past decades has clearly failed, the Indian government is now bringing in even more brutal repression. Moreover, the door has been opened to change the composition of the population: rich Hindus can buy land in Kashmir, and poor farmers may seize this opportunity in the hope of finding an individual way out of poverty. Under capitalism, of course, this will not provide a solution – it will lead to more tensions and violence.

There have been protests against the undemocratic measures taken by the Indian government. There were several demonstrations in Pakistan-occupied Kashmir, and there are protests in the diaspora. In India, there has been opposition from some opposition parties, but not all of them. However, the potential for resistance in India could be a lot bigger, especially if the left hadn’t failed on critical issues like the national question. In recent years, huge general strikes have taken place in this subcontinent with hundreds of millions of participants. But as long as the trade unions leave the political scene to the Hindu-nationalist BJP, Congress’ inefficient capitalist opposition or the ‘lesser evil’ tactics of the communist parties linking their destiny to Congress, the social demands of the trade unionists will be overshadowed by the communalism of the BJP machine.

Marxists oppose the undemocratic coup of the central Indian government in Jammu and Kashmir and, more generally, the occupation of Kashmir. We defend the right to self-determination so that people can decide for themselves on their future. Democratic rights, including the right to self-determination, will only become a reality if they are accompanied by social change: breaking the power of the capitalists, landowners and their political puppets. This requires mass movements in both India and Pakistan that do not rely on parts of the establishment, but on the potential strength of the workers and oppressed in the region. Only they can realize a socialist alternative to the barbarism of capitalism and build a socialist Kashmir as part of a socialist confederation of the subcontinent.

ABOUT US
Socialist Alternative is a national organization fighting in our workplaces, communities, and campuses against the exploitation and injustices people face every day. We are community activists fighting against budget cuts in public services; we are activists campaigning for a $15 an hour minimum wage and fighting, democratic unions; we are people of all colors speaking out against racism and attacks on immigrants, students organizing against tuition hikes and war, people of all genders fighting sexism and homophobia.
Contact us: info@socialistalternative.org
FOLLOW US
© Socialist Alternative 2020 | All rights reserved
17 Shares
Tweet
Share17