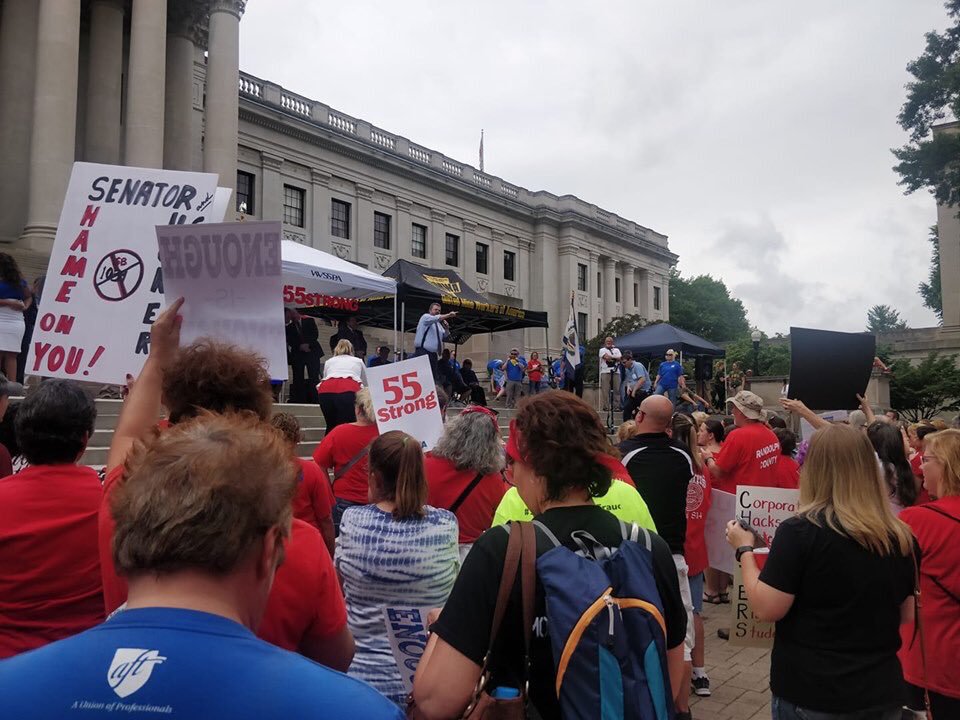 Update: On August 2, the Columbus Educators Association (CEA) and the Columbus City Schools district reached a Tentative Agreement. The CEA membership must still vote to ratify the contract, and details of the TA have not been released.

As educators gear up for the school year, we are seeing a continuation of the #RedForEd movement nationally with the possibility of walkouts by educators and school staff in Columbus, Ohio, and Chicago, Illinois if their respective districts don’t fulfill their demands for improved working and learning conditions. Simultaneously, the corporate elite are gearing up with one goal in mind: to halt the expansion of working-class gains won by strike action, in fear that this relearning of the methods of working-class struggle will spread beyond school districts and into other public and private sectors.

The teachers revolt has parked a broader resistance of working-class communities against the drive to privatize education which has not delivered on the promises made by its Republican and Democratic promoters. Corporate privatizers are more on the defensive today than at any point in the past twenty years, and signs are pointing toward a continuation of the #RedForEd movement in the 2019-2020 school year and beyond.

While educator unions (and the entirety of the labor movement) must draw lessons from the demands, strategies, and experiences gained from previous teacher strikes in 2018-19, to win substantial gains for working people, we must not fall prey to the temptation to “copy-and-paste” the #RedForEd movement. The corporate education reformers working to privatize our public education system, as well as  both corporate political parties, have learned from those strikes and will not stand idly by allowing educators and students to win victories that involve taxing big business to fund our schools. While there have been local gains won by the #redfored movement, our education system is still under attack due to massive underfunding and privatization efforts. The teachers revolt will have to adapt to safeguard gains heroically won by educators in 2018-19, and continue to fight for improved working and learning conditions.

In February, West Virginia educators walked out for the second time in a school year, initially stopping a bill that would open the state to charter schools, with the carrot of money for raises, more nurses, and more schools. The Republicans eventually won this battle by reintroducing and forcing the bill through in late June when school was out of session, and will continue to march toward privatization of schools.

The ruling class is banking on massive demoralization to stymy strike action this coming school year, and it is critical that educators broaden their ranks by calling on all public sector workers to join them in a united front to fight for what working people need, broadening their movement by including demands like Medicare for All. This fight is not completely over and there is a strong possibility that further strikes will happen this fall. West Virginia teachers’ initial strike in 2018 ignited a national wave of walk-outs and protests. A defeat for the teachers in West Virginia would be a blow to the entire labor movement.

In Columbus, Ohio, the Columbus Education Association (CEA), represents 4,300 educators in a district serving around 50,000 students. The CEA authorized a strike for this coming fall if the district does not improve working and learning conditions in the ongoing contract negotiations. In direct response to this vote, the Columbus Public Schools district and city council have entered into a $50,000 “contingency plan” contract with a union-busting consulting group to prepare for a possible educator strike this fall. The ruling class is adapting their approaches to educator strikes by not only refusing to invest in the day-to-day operation of public schools, but actively employing anti-worker corporations to defeat educators fighting for better working and learning conditions.

The CEA, similar to educator unions across the country, is demanding reduced class sizes and more support staff, an end to the school-to-prison pipeline by alternative programs for discipline, and for the funding of schools not corporate tax breaks (CEA Website, 2019).

This would be the first strike of the CEA since 1975, and comes as the district spokesman, Scott Varner, is threatening state takeover if the schools don’t improve (WOSU.org, 3/12/2019). Teaching conditions reflect learning conditions, and Columbus educators have experienced budget cut after cut, while massive corporations like CoverMyMeds have been given a 15 year, 100% tax abatement worth $77 million. The CEA is correctly pointing toward the need to fund schools and to save taxpayer money by ending handouts to wealthy corporations.

Chicago, Illinois: The need for coordinating across labor unions

Before the West Virginia strike in 2018, teachers across the country were inspired by the historic 2012 Chicago Teachers Union (CTU) strike, led by the left Caucus of Rank-and-File Educators (CORE). Both the CTU and SEIU local 73 (which represents support staff, security officers, and custodians in the public schools) are once again in negotiations with Chicago Public School District for a fair contract that includes enforceable class size limits, no non-mandatory testing, and a moratorium on charter schools (our article on Chicago).

SEIU local 73 has authorized a strike and has begun to plan a coordinated walkout with Chicago Park District workers who are also in local 73. The CTU is beginning to consider strike action, and active rank-and-file enthusiasm is vital to building a fighting campaign. CORE should utilize the network of left caucuses of rank-and-file educators that formed nationally following 2012, the United Caucuses of Rank-and-File Educators (UCORE), to build national solidarity across contract negotiation and in building the fight for public education.

Need for Nationwide Day of Action

Educators are facing the daunting task of supporting young people who are up against the unrelenting day-to-day and existential ramifications brought on by global capitalist crises. These same educators are facing budget cuts, layoffs, bureaucratic takeovers of entire schools and districts, as well as threats to their pensions and skyrocketing health care costs. The #RedForEd movement has become an imperative outlet to fight for a better world for both themselves and their students.

The development of rank-and-file uprisings in union locals will likely continue. We have seen in places like West Virginia and Arizona that it is not because of the existing union leadership that victories have been won, but because of new leaders taking on roles of organizing coworkers as well as communities. We are seeing educators and working-class communities looking for alternative tactics and strategy, and it is critical that we look to the history of working class struggle as an example of fighting strategy.  This local rank-and-file momentum should be directed toward a national day of action to bolster and unite our locals fights for taxing the rich to fully fund our public education.